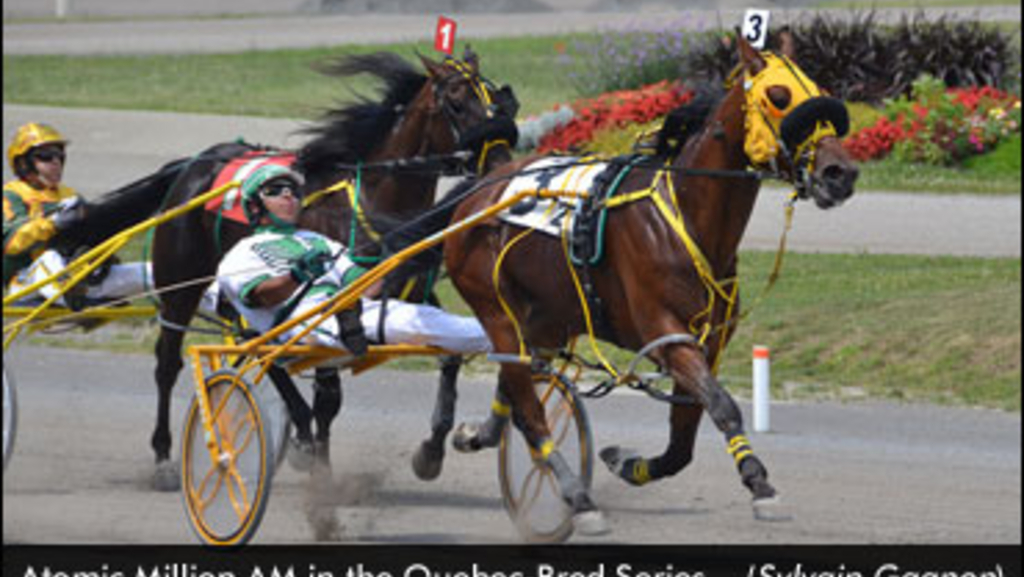 With ideal weather and stakes competition, there were plenty of fast miles and hotly competitive racing at the Hippodrome 3R on Sunday afternoon for the second preliminary round of the $400,000 Quebec-Bred Series for three-year-old pacers and trotters.

The series features four preliminary rounds of competition, each division going for a purse of $7,500 with the top eight point earners returning on Sunday, September 7 for the $65,000 finals in each of the four divisions for colts and fillies.

The colts were the main stars on Sunday with the fastest mile of the day coming in the second race, the first division for three-year-old pacers. That’s when Atomic Million Am and driver Sylvain Lacaille enjoyed a two-hole trip behind pacesetter My Lucky Bluejeans through quarters of :27, :55 and 1:23.2, then popped the pocket at the three-quarters and went on to win by one length in 1:53.1. Bali (Marie Claude Auger) was second with My Lucky Bluejeans (Denis St Pierre) third.

The win was the third straight and eighth victory in 10 starts for Atomic Million AM. The gelded son of Million Dollar Cam, trained, owned and bred by Alain Martin of Gatineau, Que., just missed tying the track record for colt pacers by two-fifths of a second.

It was a case of switching tactics with the same results in the fourth race second colt pacer division. This week it was Jefferson Tare and driver Pascal Berube who cut the mile with Hall Bro (Stephane Brosseau) taking the two-hole trip through the first quarter in :27.1 and the half in :56.4. That was when Brosseau took Hall Bro first over to press the pace to the three-quarters in 1:25.4. DJ Power (Stephane Gendron) had come first-over and then ducked into the two-hole spot. As they started down the stretch, Jefferson Tare dug in and was able to hold off DJ Power, but could not keep Hall Bro from scoring a head triumph in 1:54.3.

The win was the second straight and fourth victory this year for Hall Bro. The gelded son of Blissful Hall is trained by Antonio Valente for breeder/owner Fernand Brodeur of Laval, Que. He paid $7.40 to win despite being the betting favourite last week.

In the lone three-year-old trotting filly division, Viva Bayama and driver/trainer Yves Filion made it two straight in the series with an impressive 2:04 victory. The daughter of Muscle Mass, bred and owned by the Filion’s Bayama Farms Inc. of Saint-Andre-D'Argenteuil, Que., moved to the lead after the opening quarter-mile and held off a game first-over Bambie Benjo (Rheo Filion) to win by one length. The pocket-sitting Lucyll Bro was third.

The win was the second in four starts for Viva Bayama and the time of the mile was a lifetime mark for the filly. She paid $2.90 to win.

The trotting colts were featured in two divisions with Maximuscle and driver Mario Charron having little trouble leading from start to finish in 2:02 to win by one length over the pocket-sitting Andovers Touch (Stephane Brosseau) with SOS Gasland (Pascal Berube) third.

The win was the fourth in six starts this year for Maximuscle, a son of Angus Hall who is trained by Eric Valiquette for owner/breeder Ecurie Provoquante of Mirabel, Que. He paid $3 to win.

The second division for colt trotters saw Bouffon P V and driver/trainer Yves St Jacques shoot out to the early lead and sting the 3-5 race favourite, Somoli E and owner/driver Jerome Lombart, to the opening quarter mile in :29.1. Once on top, Somoli E was then challenged first-over by Monster Mass (Claude Larose), but Somoli E was up to the task and by the finish wire he won by one and one-quarter lengths in 2:02.1. Monster Mass was second with Horatio Drummond (Richard Veilleux) third.

Sired by Mr Lavec, Somoli E earned his second straight win and fourth of the season from nine starts. He paid $3.30 to win.

There were three divisions for three-year-old pacing fillies. The first division saw Champagne Shower and driver Denis St Pierre lead from gate-to-wire with ease in 1:57.3 by three and one-half lengths over Raiponce (Marie Claude Auger) and Astro Maggs (Denis Audet).

The daughter of Santana Blue Chip notched her second win this year in five starts for trainer Helene Filion. She paid $3.20 to win for owner Sotirios Anastasopoulos of Sainte-Therese, Que.

The second division saw My American Tallia and driver Stephane Gendron take the lead away from Night Fall (Sylvain Lacaille) at the opening quarter mile and then lead the rest of the mile race, drawing away in the stretch to win by three and one-half lengths in 1:58.2. Night Fall was second with Bemmol Kalie (Melanie Plourde) third.

Daniel Martin trains the homebred America Ideal filly, who broke her maiden with the win, for owners Gestion Mario Audet Inc. of Portneuf, Que. and Yves Sarrazin of La Presentation, Que. She paid $2.90 to win.

Delirium and Gendron posted the fastest of the filly divisions in the ninth race, scoring by two and one-half lengths in 1:57.1 over Tango Bayama (Rheo Filion), with pacesetter Canaco Xenia (Sylvain Lacaille) third.

Delirium benefited from a two-hole trip behind Canaco Xenia until the three-quarters when they came first-over, collared the leader on the final turn and then pulled away in the stretch.

The win was the second this year in five starts for the daughter of Artistic Fella. Delirium paid just $2.20 to win as the overwhelming 1-5 betting favourite. She is owned and was bred by the Hudson Standardbred Stable of Hudson, Que.