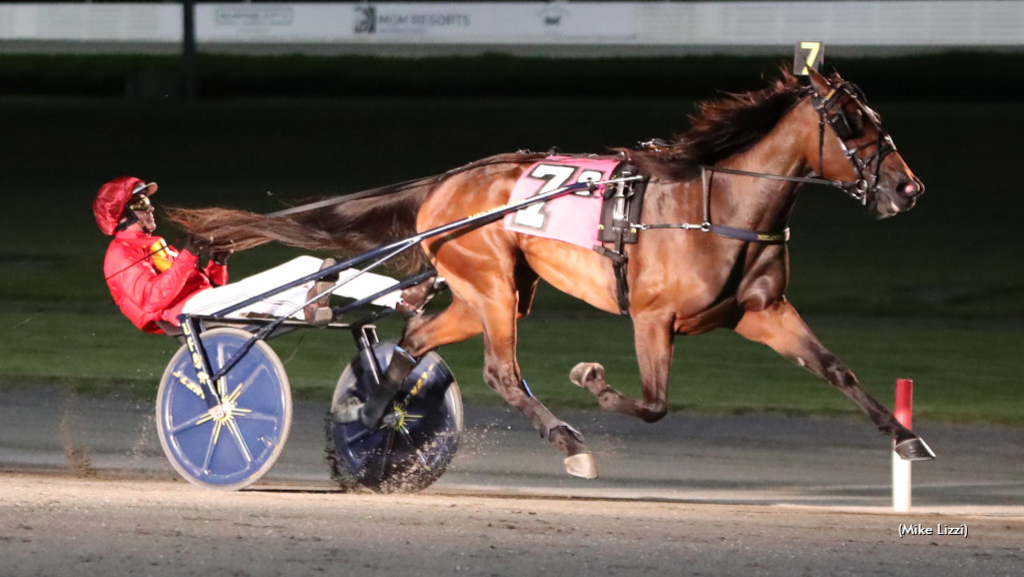 Joviality S became the first filly since Continentalvictory in 1996 to win Yonkers Raceway's MGM Yonkers Trot, taking the $280,904 final and the first leg of the Trotting Triple Crown for three-year-olds on Friday night in 1:53.1 to equal the track record for her division.

Driver Brian Sears had Joviality S ready to leave from post seven, and she fired right to the top, carving out fractions of :27.2, :56.4, and 1:24.4 while pursued by pocket-sitter Double Deceiver (David Miller). Those two faced off in a match race through the lane, and although Double Deceiver made some late headway, it wasn't enough, as Joviality S tallied by a length and matched Plunge Blue Chip's track record established back in 2018. Pour Mea Double (Dexter Dunn) got up for third.

"She's just so handy out on the track and lets me do anything that I want. It makes my job so much easier. She has so much talent, gets over the ground so easy, and just has a great gait to her," said Sears. "I let her roll along a little bit tonight. She felt really good getting over the track. I called on her a little bit down the lane, and she picked it up like she usually does."

With one notch in the Trotting Triple Crown now secured, the question will be if Joviality S opts to go in the Hambletonian or Hambletonian Oaks, but Sears noted she could have some additional racing to do before that.

"I really haven't talked to Marcus (trainer Marcus Melander) about it. Maybe we'll get a sire stake or two in between now and Hambletonian Day or we'll just take it from there. We'd still like to race her in and keep her tight," remarked Sears.

Little Pink Lies shot to the top from post five, but Dunn also left from post six with Jiggy Jog S, and she cleared to the point passing the :27.3 opening quarter. Jiggy Jog S then faced no pressure from there, trotting through a half in :56.1 and a three-quarters in 1:24.3.

While Jiggy Jog S had a fairly routine journey up to that point, it was anything but routine on the last turn as she drifted out and then got rough, allowing Little Pink Lies to take command on the inside and get a bit of separation coming into the lane. However, Jiggy Jog S got back on the right foot once she got straightened up in the stretch and was able to chase Little Pink Lies back down, defeating her by three-quarters of a length. Cash Infusion (Yannick Gingras) came in third.

A Walner filly bred by and owned by Jorgen Sparredal Inc, Jiggy Jog S won for the fourth time in her 15th career appearance, and she has now earned $349,056. Jiggy Jog S paid $2.70 to win.