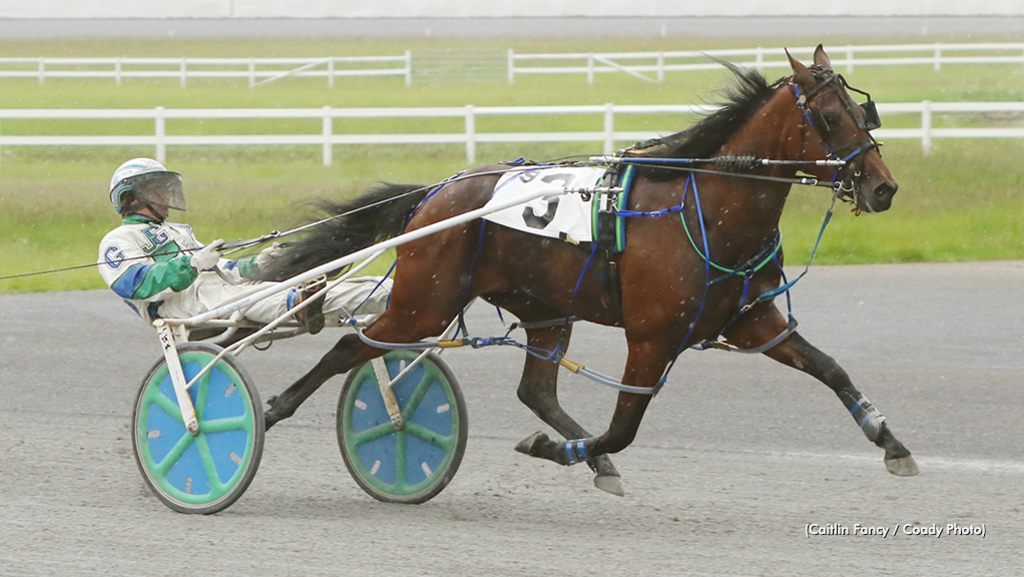 Ernesto Delacruz posted the quickest mile of the three Alberta Marksman eliminations when stopping the clock in 1:55.3 to take the first $7,500 elim. The Vertical Horizon colt cleared command to a :28 first quarter and faced little challenge from there through middle fractions of :58.2 and 1:27.3. He turned for home coasting on a two-length lead which he held in rein to trainer-driver J. F. Gagne to beat pocket-sitter Subzero, while Angelo tried to gain first-over into the final turn but settled for third.

Gagne co-owns and Ernesto Delacruz with Peter Van Seggelen. Their homebred has now won five races from 10 starts and earned $65,070. He paid $2.70 to win.

Lets Tie One On then lunged from off the speed to land a half-length victory in 1:56.4 in the second elimination. Driver Phil Giesbrecht was shuffled to last with the Vertical Horizon colt after a :28.3 first quarter and before a :59 half, but nonetheless charged the Chris Lancaster trainee to the center of the track to attack the front. Bohannon clung to a contested lead by three-quarters in 1:28.1 with 3-5 favourite Joe Dimagio pressing first over and Lets Tie One On swooping to their outside. Joe Dimagio eventually slid to the lead off the corner but Lets Tie One On continued to speed through the finish to snag victory while Wine Thirty, off a second-over trip, took third. 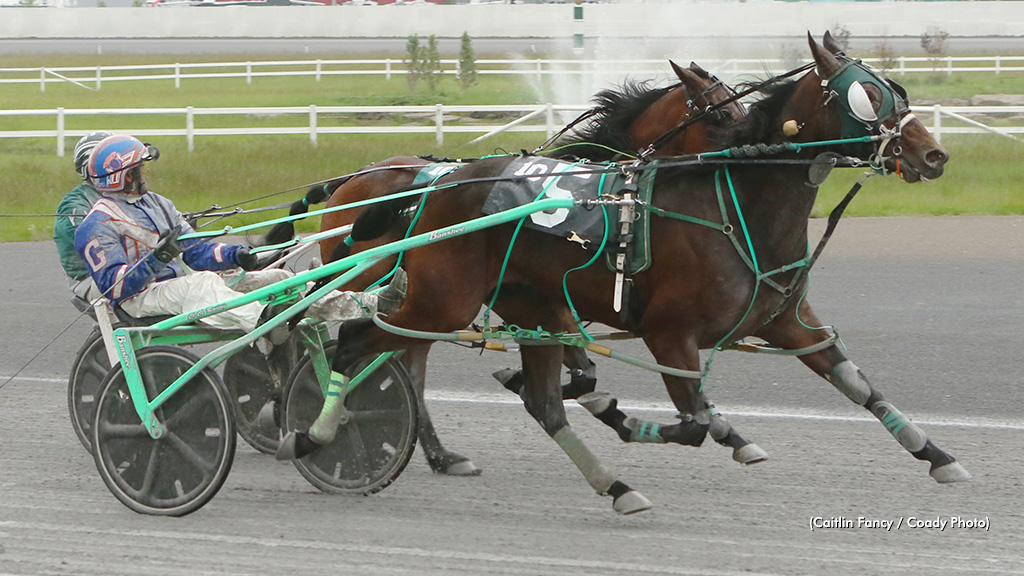 Conditioner Chris Lancaster co-owns Lets Tie One On with Kelly Hoerdt and Derek Gilbert. He won his fifth race from 14 starts, has now amassed $68,845 in earnings and paid $9.80 to win.

Vegas Gambler capitalized off a pocket ride to snatch the last Marksman elim from pacesetter Joe Rich in 1:56.1. Protecting position from the pylon post, Vegas Gambler then yielded the lead to Joe Rich through a :28.2 first quarter and drafted through middle sectionals of :58 and 1:27.3. With a first-over bid from Sharkas Lil Lad flattening off the final turn, driver Michael Hennessy pulled Vegas Gambler from the pocket to take aim and then defeat Joe Rich by a head at the beam. Sharkas Lil Lad held third. 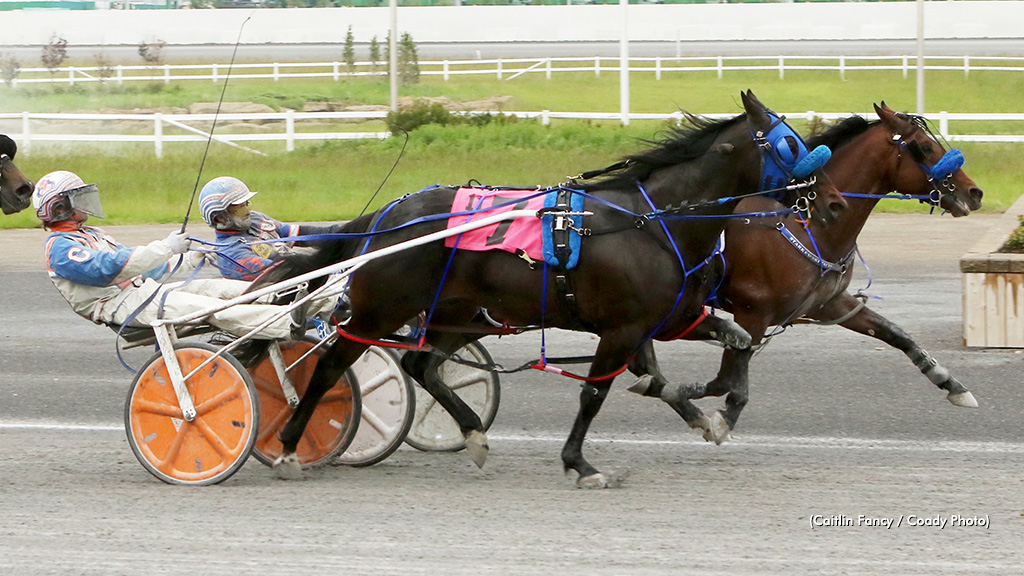 Divine Art topped the winners of the Alberta Diamond eliminations with an open-length victory in the second elimination timed in 1:54.2. Sent the odds-on choice, trainer-driver Nate Sobey swept Divine Art to the point out of third after a :28.3 first quarter and cleared control before a :58.2 half. Chaste Forever tracked the favourite’s brush but raced uncovered towards the backside as the tempo quickened to three-quarters in 1:26.2. Chaste Forever could not keep pace with the daughter of Outrageous Art to the final turn, so Divine Art separated in the lane to pass the beam 5-1/4 lengths better. Proud Of My Roots gave pursuit from the pocket to take third. 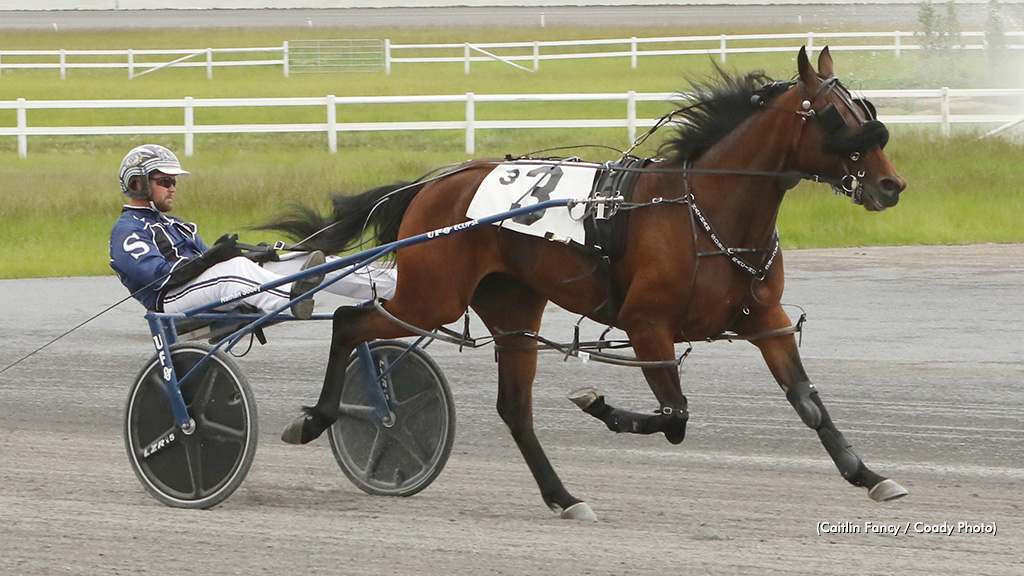 Wrangler Jewel rolled to a coast-to-coast victory in the first Alberta Diamond elimination. Driver J. F. Gagne grabbed the lead with the Wrangler Betonme filly to a :29 first quarter and kept all challengers at bay through middle splits of 1:00.2 and 1:30. She then spun for home to post a 1-1/4-length win in 1:59 over Outlawskysthelimit, who overtook pocket-sitter Dialmeup for second. 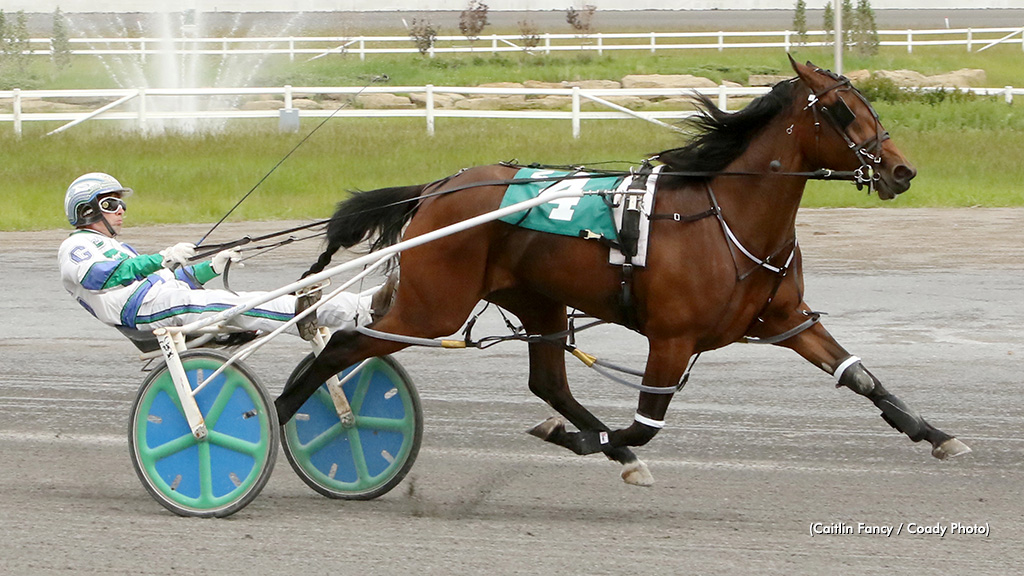 Wrangler Jewel, a homebred for Dr. Maurice Stewart, has now earned $94,290 in scoring her fourth win from 12 starts. Marie Brooking conditions the $4 winner.

Jamaica Move motored from off the speed to nab victory in the last Alberta Diamond elimination. Away fifth through a :27.4 first quarter, trainer-driver Kelly Hoerdt stayed put with the daughter of Vertical Horizon into a :57.1 half before springing her to the center of the track up the backside. She gradually gained ground while wide through three-quarters in 1:26.2 and around the final turn and continued progressing in the drive for home. Goodbye Ceia Later pulled pocket to overtake pacesetter Two Fingers Gold in the stretch, but Jamaica Move with more momentum downed her by a neck at the line while Saphire Blue just missed in the three-way photo and settled for third. 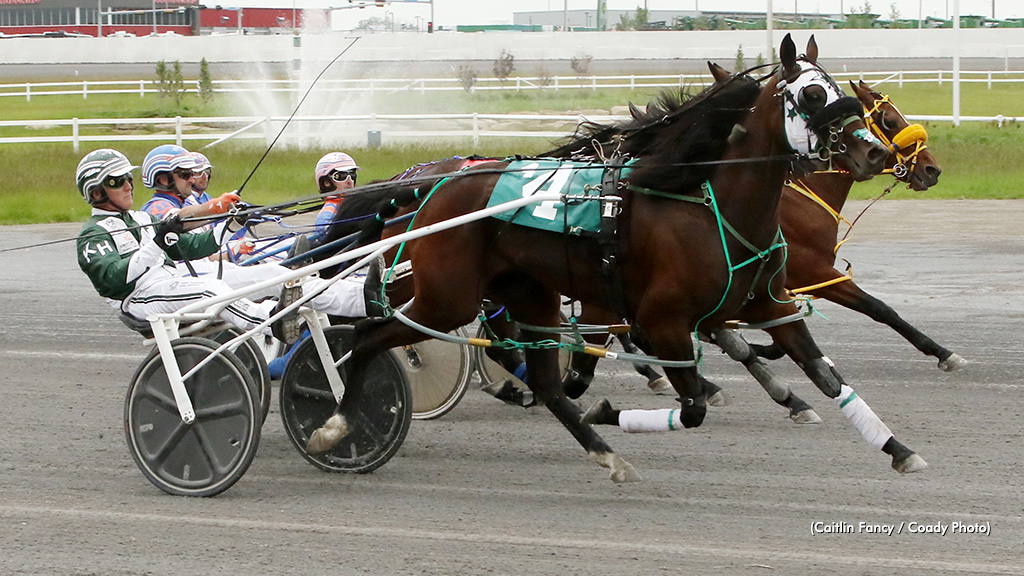 Hoerdt co-owns Jamaica Move with Ralph Morrow. She won her third race from 16 starts and has now banked $39,631 while returning $5.30 to win.

The co-featured $13,500 Preferred Pace events both had repeat winners. Codename Cigar Box ($3.80), off the 4-5 favourite, stormed off a second-over trip to take the Preferred Pace by a neck over pacesetter Tiempo Hanover in 1:53.3 to collect his 18th win from 42 starts and push his wallet to $239,343 for owners Hoerdt, Fred Gilbert and Blair Corbeil. Graceful Horizon nabbed her fifth-consecutive win while repeating in the $13,500 Fillies & Mares Preferred Pace. Phil Giesbrecht launched the four-year-old Vertical Horizon mare from second-over cover to a 1:55.1 win by 1-1/4 lengths over Betcha Baby to give the Chris Lancaster trainee her 17th win from 29 starts and add to her bankroll of now $191,426. Lancaster co-owns her with Derek Gilbert and Velda Olding.

Trainer Kelly Hoerdt ended the 13-race card with a hat trick. On top of his wins with Jamaica Move in an Alberta Diamond elim and Codename Cigar Box in the Preferred Pace, he took the nightcap with a coast-to-coast score by Aime Hanover ($9.20).