Filion Doubles Up In OSS 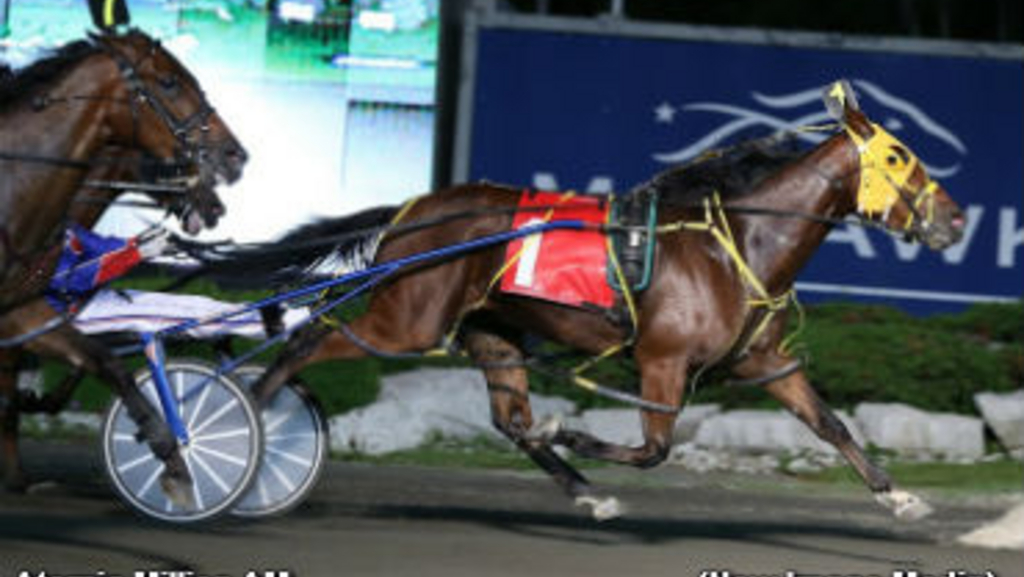 Two-time O’Brien Award-winning reinsman Sylvain Filion had a banner night during Tuesday evening’s 11-race card at Mohawk Racetrack thanks in large part to a pair of OSS Grassroots victories with three-year-old pacing colts.

The quickest winner on the card was Atomic Million AM, who roughed up race favourite Prince Clyde in the backstretch before Filion released that rival to the front. After catching that foe’s cover around the final turn Atomic Million AM popped out of the pocket and picked off the public’s top choice in the closing strides. Atomic Million AM stopped the clock in 1:50.4 en route to defeating Prince Clyde and Jiggle It.

The homebred son of Million Dollar Cam-Lady Rod Hustler is owned by Ferme Alain Martin of Gatineau, Quebec. Martin trains the pacer who is 6-for-8 this year. The pacer’s bankroll now stands at $41,762.

V I P Bayama was an impressive winner earlier on the card, and what made it even more impressive was the fact it was his first start of the season. The homebred son of Mach Three-Lucky Josie tracked cover in the back half of the mile and sprinted to the lead in the late stages of the mile. His :27.2 closing quarter helped propel him to the quarter-length tally over Recharge in 1:52.3. Third prize went to race favourite Svadilfari.

Filion manufactured the winning trip for V I P Bayama, who hangs his harness bag in the barn of trainer Stephane Larocque. The colt, who is owned by Bayama Farms of Saint-Andre-D’Argenteuil, Quebec, is now a four-time winner with more than $52,000 in his bank account.

Sanattle Slew turned on the afterburners in the lane and rocketed past rivals en route to a 1:52.4 score for Hall of Famer Steve Condren. The son of Santanna Blue Chip-Armbro Ocala powered home in :28 to win by a neck over Cluster Hanover. Lucky King, who was parked every step of the way from Post 10, went a huge mile to finish a bang-up third.

Bred, owned and trained by Jeff Gillis of Hillsburgh, Ontario, Sanattle Slew improved his 2014 record to 5-0-1 from 18 starts with the win. The lion’s share of the purse bumped his overall cash stash to $57,585.

Nirvana Seelster also used come-from-behind tactics to win his $18,000 division in 1:52.3 for driver Phil Hudon. The Bill Budd trainee uncorked a :26.4 closing panel to prevail by a neck over Rather Swell. Third prize went to D Gs Justlikethat.

The son of Camluck-No Strikes Against has put together a 2-1-3 record from 11 starts this season after going unraced as a two-year-old. Bruce Davy of Brockville, Ontario owns the career winner of $31,060.

Regal Babe got up in the final strides to capture his division, and in doing so he broke out of an 0-for-7 start to the season for Team McNair. The son of Stonebridge Regal-Nascar Babe made multiple moves in the mile including his late surge past Shadow Place en route to the 1:51.3 triumph. Shadow Place was a nose in arrears, with third prize going to Reasonable Force.

Doug McNair guided the Gregg McNair-trained homebred to the career-best performance. The three-time winner, who is owned by Rob Chapple of Chatham, Ontario, watched his lifetime earnings swell to $58,938 with the win.

Regal Son survived a first-over trip and won the final division in 1:51.3 for the tandem of driver Randy Waples and trainer Bob McIntosh. The homebred tackled race favourite Titus Seelster around the final turn before putting away that foe in the closing strides en route to winning in a career-best clocking of 1:51.3. Titus Seelster was next best, with Andreios Kardia taking home the show dough.

The son of Stonebridge Regal-On This Day now boasts a 2-5-1 record from 12 starts this season for the partnership of the Robert McIntosh Stables Inc, C S X Stables and Gordon Wright. The three-time winner has stashed away more than $45,000 to date.