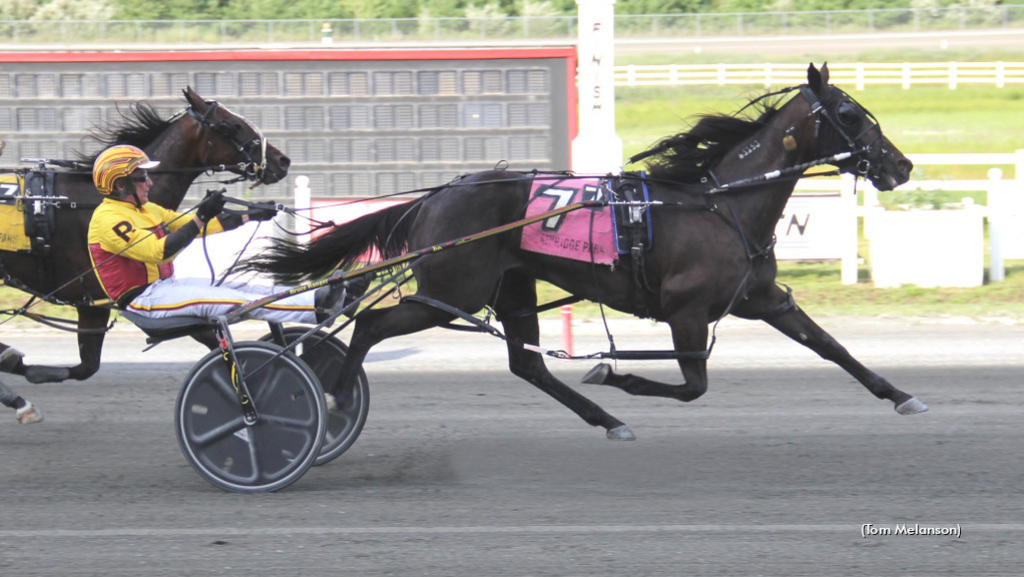 After shipping in from to make her first start ever in , Pure Cotton left the commonwealth with the winner's share of the purse along with the new track record she set in the $20,000 Fillies and Mares Open Handicap Pace at on Tuesday afternoon.

Bruce Ranger left with Pure Cotton and tucked in third while Powered By Mach (Jay Randall) and Demeter N (Larry Stalbaum) argued vehemently for the lead. That scuffle provided a :26 quarter and :53.2 half, where Probert (Nick Graffam) came rolling up the outside to join the leaders.

Pure Cotton continued to watch from the pylons as Demeter N faltered at three-quarters and Probert advanced to second outside and next to Powered By Mach. With all challengers now exhausted, Ranger tipped Pure Cotton three deep at the head of the lane and barrelled down the center of the track en route to a 1-1/4 length victory in 1:50.3.

The time was a new lifetime mark for Pure Cotton as well as a new track record for four-year-old pacing mares, beating the 1:51.1 time The Fun Marshall set last year with Ranger aboard as well.

It was the fifth win in the last six starts for Pure Cotton ($9) and owner William Hartt. Lance Hudson trains the winner.

In the first, Bottomoftheninth (Brett Beckwith) got away a gapped fifth chasing Kaks Rev It Up (John Nason) and Quarrel (Kevin Switzer, Jr.) who battled hard for the first three quarters. But Beckwith had him out and rolling up the backside and after catching them in the final turn, burst to the line and won by a neck in a new lifetime mark of 1:52.4.

Bottomoftheninth ($5.60) is owned by Martin Valentic and trained by Elisha Lafreniere.

The second saw Adashious (Drew Monti) setting the pace with splits of :26.4, :55.2 and 1:23.1. But as the filed bunched around the far turn, Hilaria (Mile Stevenson) tipped five wide from last and flew down the lane to capture the win by 1/2 length in a new season's mark of 1:52.

Hilaria ($8) is owned and trained by Ralph Andersen.

The final of the three races was the fastest of all with Unwritten Rule (Brett Beckwith) rolling down the road in blistering splits of :26.1, :53.4 and 1:21 while Anvil Hands (Jim Hardy) got the perfect pocket trip just lying in wait. When the race straightened out for home, Hardy tipped Anvil Hands and drove him to the line first by 3/4 length in a new lifetime mark of 1:51.1.

Anvil Hands ($5.80) got his sixth win of the year for owners Dave and Christine Thibault, Jim Hardy and Jolene Andrews, who is also the horse's trainer.

Drivers Bruce Ranger and Kevin Switzer, Jr. both had hat tricks on Tuesday and they were joined by trainer Elisha Lafreniere who also scored three wins.

Live racing resumes at on Thursday afternoon (July 21) with post time at 4 p.m.

The Grand Circuit returns to on Sunday (July 24) when the track will host the $250,000 Spirit of Massachusetts Trot and $100,000 Clara Barton Distaff Pace. Post time for the special matinee card will be at 2 p.m.