Bet On Becky Best In Gold 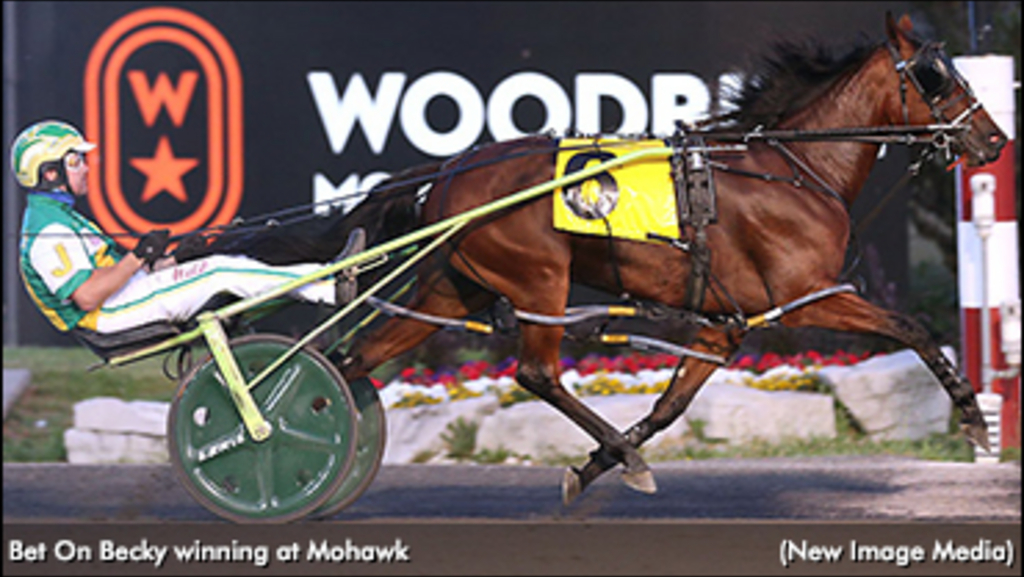 Bet On Becky extended her win streak to three on Sunday (July 19) with an effortless 1:53.3 victory in the first $108,000 two-year-old pacing filly Gold Series division at Georgian Downs.

The Bettors Delight daughter and regular reinsman Jody Jamieson eased away from post 2 and settled fifth as stablemate Ring Of Kerry led the field of 10 to a :27.2 quarter. Heading by the grandstand for the first time Bet On Becky buzzed to the front, reaching the half in :56.2, and it was smooth sailing from there for the favourite. Off three-quarters in 1:25, Bet On Becky cruised home a three-and-one-quarter length winner in 1:53.3. City By The Bay finished second and Ring Of Kerry was third.

“I even think we could do okay with (driving) her,” joked trainer Tony Beaton. “She did it with relative ease again, by the looks of things. Jody was real happy with her too, so that’s good.”

In the July 7 Gold Series season opener at Woodbine Mohawk Park, Bet On Becky delivered an impressive 1:50.4 victory, still the fastest mile clocked by a two-year-old in North America this season. She also posted a 1:54.4 win in an overnight event at Woodbine Mohawk Park on June 26. With those two starts and a June 19 qualifier under her belt, Beaton gave his fledgling star a mini-vacation before prepping her for Sunday’s test.

“We kind of gave her an easier week there last week and then we trained her up pretty good there the other day and tried to make sure we had them ready for tonight,” said Beaton. “She showed she was ready anyway and, actually all four of them raced pretty good tonight. I was happy with all of them, but obviously Becky just stands out.”

In addition to Bet On Becky and Ring Of Kerry, Beaton trainees Turning The Table and Best Keepsake finished third and fourth in the other Gold Series division.

All of the fillies save Best Keepsake are eligible for the July 27 Battle Of The Belles eliminations at Grand River Raceway and Beaton said that will be their next start so long as they remain happy and healthy. Bet On Becky is eligible to all of the major two-year-old pacing filly stakes in Ontario and has an action-packed schedule ahead if she continues to find the winner’s circle with the ease she has demonstrated in her first three starts.

“Becky is going to have a long, long season ahead of her if everything goes good. She’s paid into stuff right to the Breeders Crown,” said Beaton, adding that filly will not be able to appear in every stake she is eligible for. “We don’t want to over race her, we’ve got to pick our spots. We’ll take it week-to-week and go from there. We’ve got to stay healthy and sound before we do anything else.”

Beaton trains Bet On Becky for Larry Menary, Kenneth Ewen, Alan Alber and Michael Guerriero. The partners offered up $70,000 for the filly at last fall’s Lexington Selected Yearling Sale and have recouped $97,633 through her first three starts.

Andra Day also picked up her second Gold Series victory with a pacesetting effort in the other $108,000 division. Starting from post 5, Andra Day left and moved forward from third when Turning The Table reached the :27.3 quarter. Comfortably in front at the :57.4 half, Andra Day soon faced pressure from favourite Best Keepsake, who challenged her through three-quarters in 1:26.1. Andra Day remained resolute however, and held off all challengers to score a three-quarter length victory in 1:54.1. Scarlett Hanover closed hard to be second and pocket-sitter Turning The Table was third.

“She’s small, but very tough and very, very gritty,” said trainer Dr. Ian Moore. “She is very fiery, and just all go, so we’re very pleased with how she’s done.”

Moore trains the Shadow Play daughter for Let It Ride Stables Inc. and Bottom Line Racing LLC. Doug McNair was in the race bike for Sunday’s victory and her 1:54.1 win in the Gold Series season opener.

Like Bet On Becky, Andra Day is eligible to the Battle Of The Belles, but Moore is not sure if the filly will compete in the eliminations or look ahead to the next Gold Leg at Woodbine Mohawk Park on August 18.

“I’ll be talking with the owners. She might be the only one, because she’s small and probably will handle the half. I won’t take the other one because she’s a great big filly,” said Moore of Andra Day and stablemate Alumni Seelster, who finished fifth to Bet On Becky Sunday after winning her division in the opening leg. “It’s a possibility, but right now I’d say 50-50.”

Also happening on the Sunday card, Louis Gregg collected his first training victory is his first career start. Three-year-old Shadow Play colt Carsons Kennedy ($21.70) came first over in the final turn of the evening's fifth race to win in 1:54.3 and give Gregg his first win.

A fourth-generation horseperson, Gregg is the son of trainer Vicki Gregg, the grandson of longtime industry participants Pete and Jean Thibaudeau and great-grandson of Canadian Horse Racing Hall of Famer Allan Walker.

(with files from Ontario Sires Stakes)