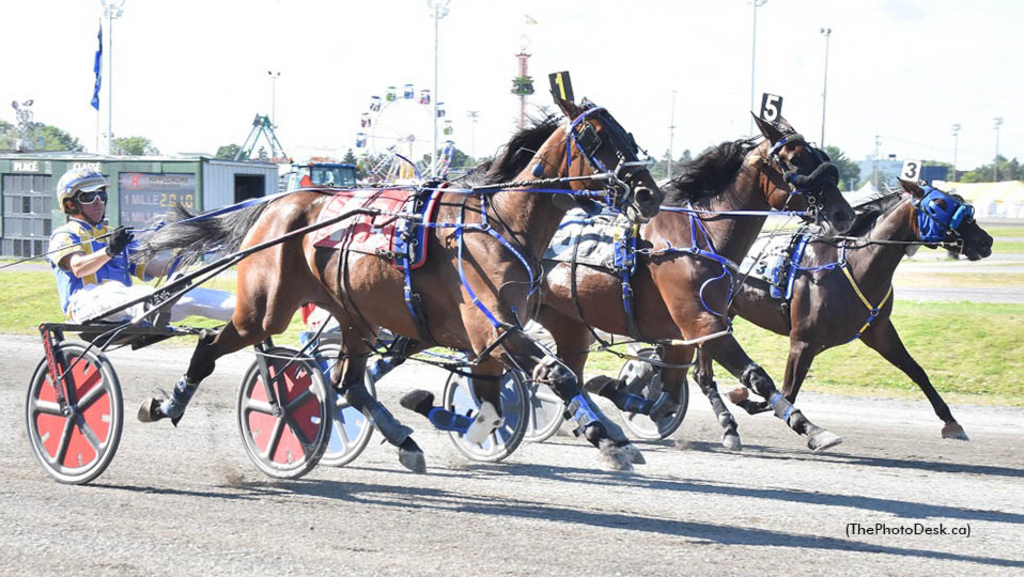 The 2022 stakes season in Quebec got underway on a beautiful warm and sunny Friday afternoon (July 15) at Hippodrome 3R with two $10,000 divisions of the opening round of the Breeders Trophy Series for three-year-old trotters.

The opening round for the colts and geldings ended with the photo finish camera having to decide the winner in a three-horse finish.

The third race began with Sammy Justice (Pascal Berube) taking control of the field from the very start with Kenogami Rebel (Stephane Brosseau) in the pocket seat to the first quarter in :30.

By the three-quarters in 1:31.2, Sammy Justice still held the lead then Orlys Shadow backed off first-over, causing Royalty Beer to move three-wide only he struck his hoof on the wheel of Orlys Shadow and went off stride. Cleveland Massimo and Shepherd were able to clear the two horses and were still in the hunt.

The win was the second this season from seven starts for Cleveland Massimo, a gelded son of Muscle Mass, trained and co-owned by Jean-Francois Maguire with Julie Malenfant, Richard Legris and 9299 0522 Quebec, Inc.

There are three rounds of preliminary competition leading towards the $60,000 finals on Sunday, Sept. 11.

In the sixth race division for the three-year-old trotting fillies, last year’s Quebec champion Stella Alpha scored the biggest romp of the year at 3R, winning by 14-1/2 lengths.

Pascal Berube sent the 3-5 favourite Stella Alpha to the front during a :29.4 opening quarter and, as the second choice in the race, HP Felicity (Robert Shepherd) tried to get the two-hole spot, went off-stride and was out of the race.

Holding the field at bay, Stella Alpha cruised to the half-mile in 1:00.2, increasing her lead more and more. By three-quarters in 1:30.2, she was leading by nine lengths and continued to widen that margin on the way to the finish line in 2:00.3. El Gio (Stephane Brosseau) was second with La Bromontoise (Jerome Lombart) third.

The win was the third straight and seventh of the season in a dozen starts for Stella Alpha. The filly by Royalty For Life won six of those races at 3R, making her the winningest horse of the season. She was bred and is owned by the trainer Sylvain Tremblay's Ecurie Alpha.

The win was the fourth this year from 14 starts for Platine Alpha, a four-year-old Control The Moment mare trained by Sylvain Tremblay. She was also bred and is owned by Tremblay's Ecurie Alpha and last year was the winningest horse at 3R.

In the fifth race Preferred 2 & 3 Handicap Trot, it was Bonfire Bash and driver Francis Picard winning for third straight time, leading most of the way.

Bonfire Bash led from the start, trading the lead quickly with Muscles Forever (Sylvain Fontaine), who ended up sitting the two-hole trip. Bonfire Bash cut fractions of :29.1 and :59.1 to the half-mile. Then Archimed Alpha (Pascal Berube) went first-over with race favourite Texaco Man (Robert Shepherd) second-over to the three-quarters in 1:29.

On the final turn, Archimed Alpha went after Bonfire Bash with Texaco Man three-wide then he went off stride, leaving the two leaders to duke it out in the stretch with Bonfire Bash winning by three-quarters of a length in a career-best 1:59.1. Archimed Alpha was second with Morally Flexible (Daniel Theroux) third.

Bonfire Bash is a six-year-old gelding by Angus Hall trained by Serge Houde for the Gest Michel Carrier Inc.

Track Notes: 3R’s leading driver Pascal Berube scored a driving triple on Friday. Francis Picard had a driving double and 3R’s leading trainer, Sylvain Tremblay, also had a double. Coming up Sunday at 3R is the opening round of the Breeders Trophy Series for three-year-old pacers with two divisions for colts and one for fillies. First race post time Sunday is 12 noon.