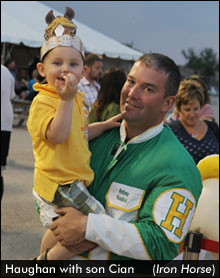 Haughan called race seven on July 13 in which West River Tigger (Scott Coulter) travelled gate-to-wire to win by two lengths over Navy Island (Paul MacKenzie). The 1:59.4 mile was a new career-best for the six-year-old trotter trained by Kevin Tremblay and owned by Tess Mauro.

While Haughan admitted afterwards to being nervous about the announcing gig, he maintained a steely composure, and managed to toss in a few quips about his fellow drivers during his solid call.

The 36-year-old Ireland native relocated to Canada in November of 2000 and has since accumulated 848 driving wins and $6.5 million in purse earnings. He now lives in Cambridge, Ont. and is currently among the top 10 drivers at Grand River Raceway, Flamboro Downs and Georgian Downs.

The next guest announcer on From Bike To Mic will be announced on Wednesday.