Winning Is Fun For Giggle Monster

The Tuesday night (June 8) card at Running Aces was packed with great racing and big performances, including another victory for six-year-old pacer Giggle Monster as he posted a dominating two-and-a-quarter length score in 1:53 in a $7,000 event.

Giggle Monster's victory brought his season win total to 11, making him the only horse in the sport to have 11 wins on their card in 2021. He was also the first horse to reach 10 wins on the year when he registered his first "Aces" win of the season on May 20. The sharp son of Wind Me Up has always been a star at Running Aces, where most of his 30 wins have been recorded. He was also voted Horse of the Year in Minnesota in 2017 after winning seven of nine starts in his freshman campaign.

On Tuesday Night, driver-trainer Nick Roland floated away fourth with Giggle Monster ($3.40) from post 5 and then brushed to the lead at the quarter, clearing just as they straightened in the lane for the first time. And once on the lead, he was never in doubt at any point in the mile. Giggle Monster is owned by Set The Pace Racing. 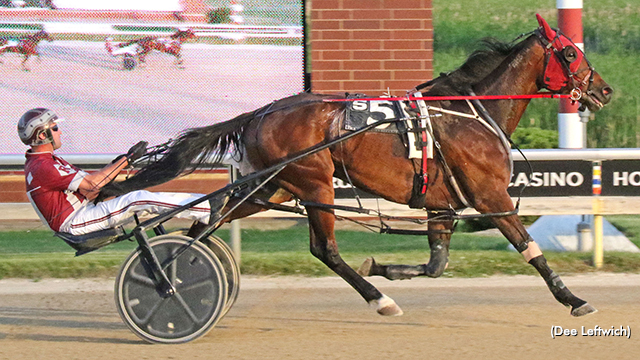 The $11,000 Open Handicap Pace went to post with a deeply talented field of seven facing the starter, and the race was a thriller from start to finish.

SB Bodacious, looking for four wins in a row, went to the front from the outside post but not before having to work a bit to clear the lead from stablemate Zanetti in a quick :26.2 opening. Stuckey Dote was also away sharply and dropped in third. SB Bodacious led through the middle stages of the race as well, posting a half mile in :55.1 and three-panels in 1:22.4.

Turning for home, Zanetti emerged from the pocket and took the lead as they approached the wire. But Stuckey Dote had also found a seam down the center of the track and flew to the wire, along with two other fast closers in So So De Vie and Whatchyastarinat. The thrilling finish was a five-way photo for all positions — and in the end, Stuckey Dote had gotten a head up at the wire in 1:51.1 over Zanetti and SB Bodacious. The top four were separated by just a neck.

It was the 43rd tally and third of the season for the winner Stuckey Dote, who has now earned $419,248 for owner/breeder Merlin Van Oterloo, he is trained by Brett Ballinger. Mooney Svendson drove the $21.40 winner.

Parklane Jet posted his 12th win and a career mark with a 1:51.4 victory in a $5,200 conditioned pace on Tuesday night. After getting away third, driver Dean Magee sent Parklane Jet to the lead and he controlled the race from there, fending off a first-over challenge from Hoo Nien A to check in a half a length ahead of that rival at the wire. The winner is owned by Terrance Smith and trained by Edward Hernandez. He paid $7.00 to win.