Forbidden Trade Off The Schneid 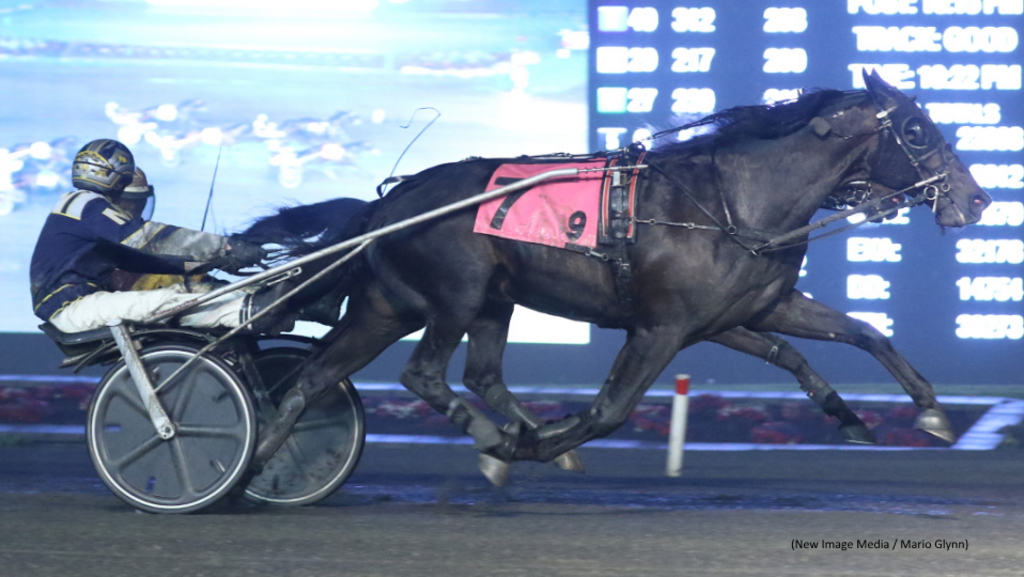 After failing to hit the board in his first three starts of the season, Forbidden Trade found his winning touch in Monday’s $36,000 Preferred Handicap Trot at .

With Bob McClure at the lines, Forbidden Trade got away seventh in the nine-horse affair while race favourite Oney Hall powered to the lead from Post 9 and scooted through fractions of :26.4, :56.4 and 1:25.4 before coming under attack.

Hey Livvy applied first-over pressure to the leader on the way to the three-quarter pole, with Combs Hanover riding on her cover.  Forbidden Trade, in the meantime, was still sitting sixth as the field headed into the final quarter of the contest.  Oney Hall made a break on the lead while coming out of the final turn, and that’s when things got very interesting.

Hey Livvy was still in the hunt, and Dream Nation emerged from his ground-saving trip in the pocket to be in serious contention in the late going.  But hungriest of them all in deep stretch was Forbidden Trade, who shook loose and stormed up on the far outside thanks to an individual final quarter clocked in :26.  He got up to win by a half-length margin over Dream Nation in 1:53.1.  Hey Livvy took home third prize.

A Pop Up Series for trotters got underway Monday evening with Mystic prevailing in a $15,000 division for the tandem of driver Chris Christoforou and trainer Rene Dion.

The four-year-old son of Kadabra-Mystical Oaks got away fourth while Maggiesmomoney marched to the lead and hung up an opening quarter in :28.4.  Shes Got Pizazz stepped out of the pocket in the backstretch and sprinted to the lead.  She sailed through middle splits of :58.1 and 1:27.2 before feeling first-over pressure from race favourite Mystic.  That gelding kicked home in :29.1 to win by three-quarters of a length over Holdin Aces in 1:57.1.  Shes Got Pizazz was third.

Dion trains the winner for Susie Kerwood of .  Sent off as the 6-5 choice, Mystic won for the first time this season and for the fifth time in his career.  He’s banked just shy of $120,000 to date.

Cool Clifford was a dominant 1:55 winner in the faster division, leading all the way through fractions of :27.4, :57.4 and 1:26.3 over the 'good' track before widening his margin to 8-1/2-lengths. Shoshie Deo and My Mini Miracle rounded out the top three finishers.

Sylvain Filion drove the popular winner, a six-year-old of Kadabra-Cook Creek Breeze for trainer Gabriella Sasso and owners Martwest Racing Stable of Mississauga, Ont. and Jeffrey Courchesne of Cambridge, Ont. The win was Cool Clifford's first in 14 starts this year and his 13th career win, lifting his bankroll to $268,540.