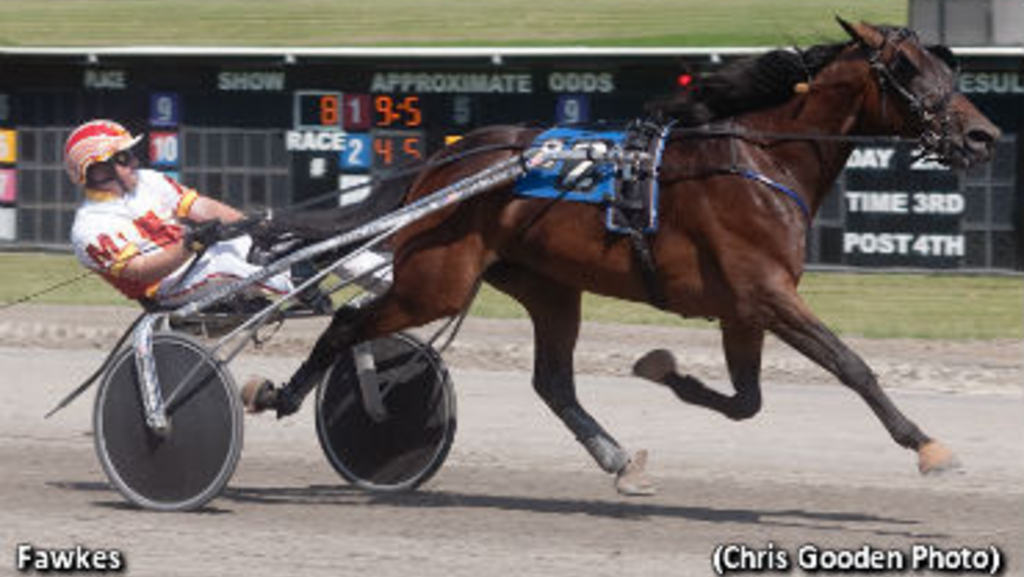 In 1605, Guy Fawkes gained fame of sorts in a failed effort to blow up the British House of Lords. Monday at The Meadows, the equine Fawkes gained his own measure of fame when he blew up the tote board

Out of the money in both of his 2011 starts, Fawkes got away in mid-pack for Aaron Merriman when things started to go his way. Washingtonian, the 2-1 favourite, was off stride early and suffered broken hopples. Buffalino Hanover, co-second choice at 7-2, had to labour for the lead from Post 9 and figured to be vulnerable late. Not Nice, the other 7-2 selection, was pinned along the pylons.

Still, the relentless first-over move that Fawkes unleashed to erase a 5-1/2-length deficit was a surprise.

“You have to give horses a chance,” Merriman said. “The horse felt really good, and sometimes you have to ignore the odds. I had planned to follow Washingtonian, but when he ran, I thought, ‘There goes my cover.’

“He went as much as he had to. When I got after him, he kind of pinned his tail a little bit, but he kept going. You have to give his team credit. They had him really good.”

Glidenfordollars, who broke his maiden last week at the Meadowlands, moved forward again by finishing second while early leader Mythical Hall rallied for show. Jonas Czernyson trains Fawkes, a son of SJs Caviar-Up Front Peg, for Ole Bach Nielsen. It was one of three wins for Merriman on the 15-race card.

The Meadows will host three divisions of the Currier & Ives fillies Wednesday, with first post at 6:55 p.m.

The $22,500 Preferred Handicap Trot also produced a surprise when 16-1 outsider Our Rail Fantasy, who competed in the track’s softest conditioned race only two starts back, used a ground-saving trip to score in 1:54.4 for trainer/driver Daren Harvey, 1-3/4 lengths better than the closing Y Dat. Early leader Rembrandt Spur saved show.

In the companion overnight feature, the $22,500 Filly & Mare Not Listed Preferred/Preferred Handicap Pace, Spring Break burst from the pocket before the final turn and triumphed in a sharp 1:51.2 for Mike Wilder. Star Keeper came from well back for second, with Tremor Hanover third.