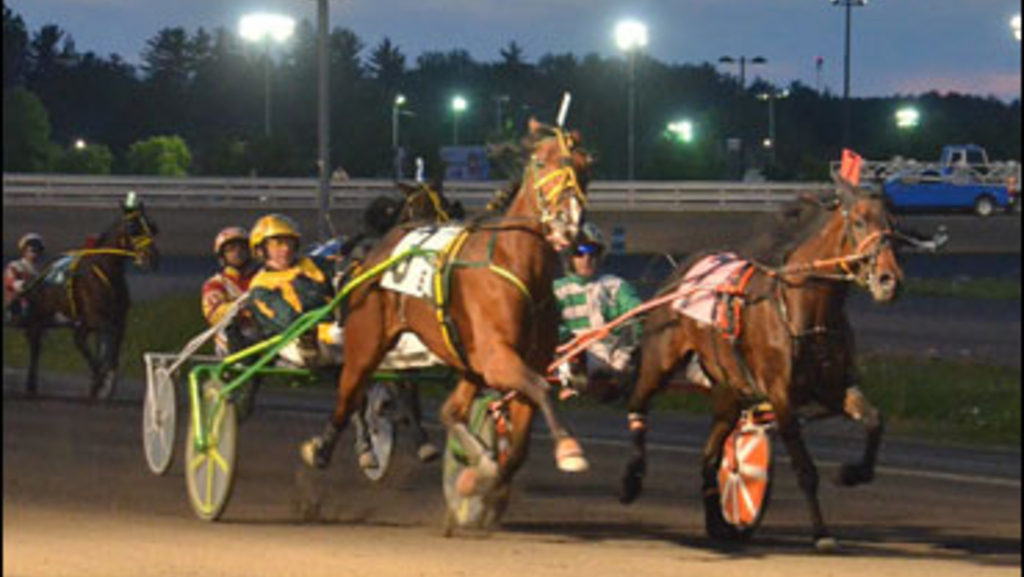 Maximuscle, along with Andovers Touch and Viva Bayama, were all return winners in the third and final leg of the $125,000 Quebec-Bred Series for trotters held Wednesday at the Hippodrome 3R.

Maximuscle was such an overwhelming favourite that he was allowed to compete but was barred from wagering in the $6,500 third race division for four and five-year-old trotters.

Starting from the rail post position, Maximuscle and driver Mario Charron got away in third-place as Excel P V (Sylvain Fontaine) went to the lead early with SOS Masters Boy (Jocelyn Gendron) grabbing the two-hole spot to the opening quarter-mile in :28.3. But once the field settled down, Charron sent Maximuscle right to the lead before the half-mile marker in :59.1, then held the field at bay to the three-quarters in 1:29.2 and breezed home to win by five and one-half lengths in 1:59.3. SOS Masters Boy was able to rally past Excel P V for second-place as did Offson for third. As the “official” pari-mutuel winner of the race with Maximuscle barred from betting, SOS Masters Boy paid $23.00 to win.

Maximuscle, the four-year-old gelded son of Angus Hall, posted his second straight win to stay unbeaten so far in 2015 for trainer Maxime Velaye and owner/breeder Ecurie Provoquante of Mirabel, Que.

In the first race division for older horses, Andovers Touch and driver Stephane Pouliot took the lead away from George S P (Stephane Brosseau) after an opening quarter mile in :29.4 and then cruised the rest of the way to win by one and one-half lengths in 2:00.3. George S P held for second-place with SOS Ticket Master (Gaetan Lamy) finishing third after a valiant first-over effort at the half-mile pole.

Viva Bayama once again showed her great ability to race on the outside and she once again was “parked the mile” but still was able to win the Quebec-Bred Series third leg for trotting mares, contested as race six.

It was not a “walk in the park” for the four-year-old mare by Muscle Mass as driver Denis St Pierre let his steed sit on the outside in third-place as Canbec Kangourou (Jocelyn Gendron) led the field from the start through fractions of :29.3, 1:01 and 1:29.4 but could not hold off Viva Bayama, who came on in the stretch to win by a quarter-length in 2:00.1. Canbec Kangourou held for second-place with Ocean Mist Beauty (Stephane Brosseau) third.

The eight top point-earners throughout the three-week long series will now return on Sunday, June 14 for their respective $35,000 finals. This Sunday live racing resumes at 1:30 p.m. with the final round of the Quebec-Bred Series for four and five-year-old pacers.