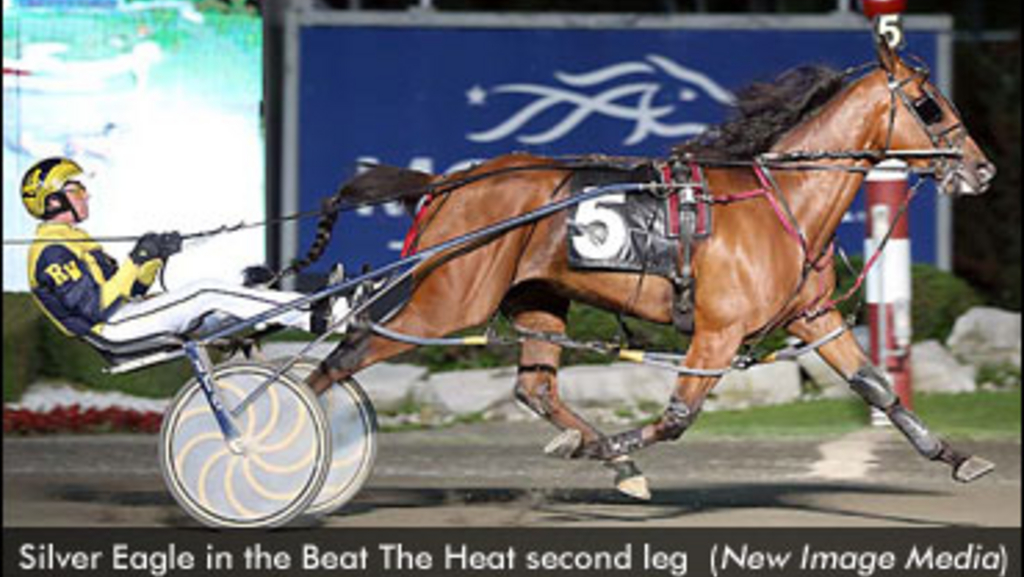 The $36,000 second round of the Beat The Heat Pacing Series continued on Saturday evening at Mohawk Racetrack with a familiar face once again in the winner’s circle.

After finding the wire first in the opening leg last week, Randy Waples guided Silver Eagle to victory in 1:51.1.

The Alberta-bred and sired son of Brandons Cowboy remains a top threat for the $43,500 final next week.

The speedy five-year-old was first to the lead in the first $18,000 split before the opening station in :27.1. Heading toward the half, Waples elected to allow a parked-out Thats The Life (Billy Davis Jr.) to clear to the front. Thats The Life continued to lead past the mid-way point in :55.2 and the three-quarters in 1:24, before Silver Eagle converted off a pocket trip to score by three lengths. After making a break before the start, Beach Buff (Sylvain Filion) recovered to finish second, over Thats The Life.

Trained by Ben Wallace for owner Holland Racing Stable of Aurora, Ont., Silver Eagle celebrated his third victory of the season as his career bankroll climbed to $344,604. He paid $3.20 to win.

In the other $18,000 division, Frankies Dragon scored the open length victory in 1:50.2 under no urging from pilot Sylvain Filion.

The Luc Blais-trainee cleared to command after the quarter in :26.3 before laying down panels of :55.4 and 1:24 en route to a six and a quarter length victory. JJ Shark (Scott Zeron) used a ground-saving trip to finish second with Bestinthebusiness (Luc Ouellette) third off a pocket ride.

Blais co-owns the four-year-old son of Dragon Again along with Pierre Charette of Gatineau, Que. The 14-time winner increased his bankroll to $123,567. He paid $3.30 to win.

The weekly Preferred events -- a $34,000 contest for all pacers and a $30,000 distaff event -- were won by a gate-to-wire Sparky Mark (Sylvain Filion, $53.80) in 1:49.1 and a from-last Greystone Ladylike (Scott Zeron, $3.20) in 1:51.2. Sparky Mark won his return appearance in Canada from the Mark Austin stable for owners David Kryway of Amherstburg, Ont., New Jersey's Vip Internet Stable LLC and Richard Lombardo of Ohio. Brent Belore trains Greystone Ladylike, who prevailed by a neck over Waasmula and notched her second win in a row for owners/breeders James and Jean Caddey of Embro, Ont.