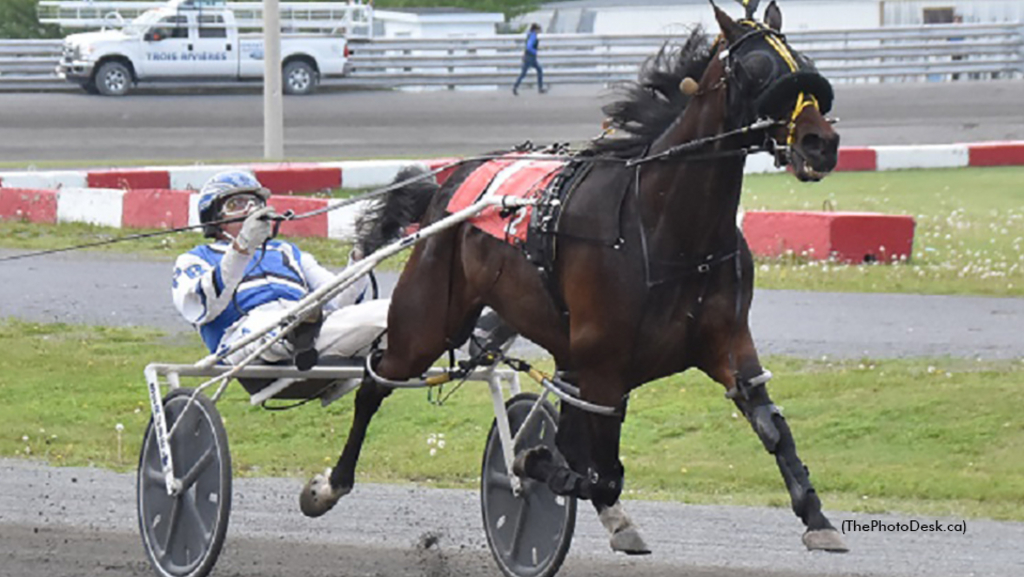 Parked out in his last few harness racing starts with poor results, BS Tyrrific had the rail post position on Friday (June 3) at Hippodrome 3R and made the most of it with Pascal Berube in the bike.

BS Tyrrific and Berube left like a rocket in the second race feature, a $4,500 conditioned pace, and never looked back.

With Old Buck (Francis Picard) sitting right on their backs, BS Tyrrific cut the mile to the opening quarter in :28.2 and the half in :58.1 before anyone else made a move in the race.

Outlaw Kismet (Stephane Brosseau) came first-over slowly as they entered the backstretch with Windsong Napoleon (Jocelyn Gendron) grabbing the cover. But BS Tyrrific and Berube were still in control through the three-quarters in 1:27.4.

As they came off the final turn, Picard came out of the pocket with Old Buck and they gave it their best shot, but could not catch the favoured BS Tyrrific, who went on to the win in 1:56.3 by 1-1/4 lengths. Old Buck settled for second with G A Speed Joey (Alain Carrier) taking third.

The win was the second this season from 15 starts for BS Tyrrific ($4.50). The nine-year-old Richess Hanover gelding is trained by Yves Tessier, who also co-owns with Gina Bragagnolo of Lavaltrie, Que.

In the very next race, the co-featured $4,500 trot, it was nearly a duplicate of the second race pacing feature.

The 2-5 race favourite, Stella Alpha, part of an entry with Archimed Alpha (who broke stride at the half), took the lead away from Muscles Forever (Sylvain Fontaine) by the opening quarter for Berube in :29.3. After that, it was all Stella Alpha and Berube as they led to the half in :59.3 and the three-quarters in 1:30. Morally Flexible (Daniel Theroux) tried coming first-over but could not gain on the leaders.

Down the stretch, Stella Alpha held Muscles Forever at bay, winning by one length in 1:59.4. Morally Flexible was third.

The was was Stella Alpha's third in her last four starts and her fourth victory of the season from eight races. The three-year-old filly by Royalty For Life was the Quebec-bred champion in her group last year. She was bred, owned and trained by Sylvain Tremblay’s Ecurie Alpha of Metabetchouan, Que. She paid $2.80 to win and was the only filly in the field against older horses.

Track Notes: H3R’s leading driver, Pascal Berube, increased his lead to 18 wins with a driving triple on Friday. His nearest competitor is Stephane Brosseau with 10 wins. With one win each on the card, Sylvain Tremblay and Jean-Francois Reid are tied for the lead among the trainers at six each. Live racing resumes at H3R on Sunday with first race post time at 12 noon.