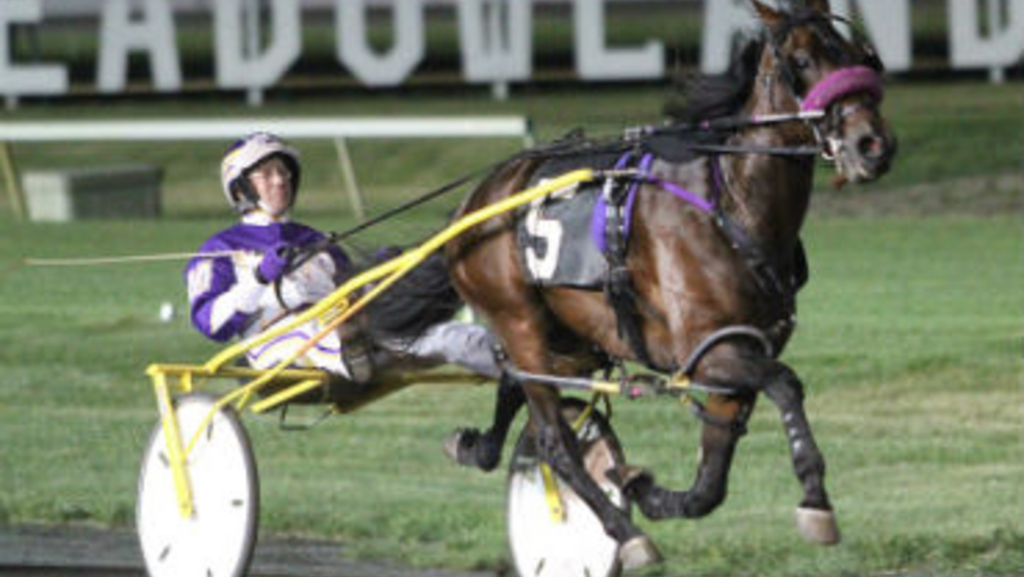 Records are made to be broken, and that's just what the two-year-olds did on Friday night at The Meadowlands.

French Laundry took the rest of the field to the cleaners, coasting to a five and three-quarter length victory in the $39,000 opening round of the New Jersey Sires Stakes for two-year-old trotting colts and geldings, the first race on Friday evening at the Meadowlands.

The Muscles Yankee colt, out of the Hambletonian Oaks winner Creamy Mimi, trotted the mile in 1:56, equaling the stakes record set by Yankee Glide in 1996.

The 3-5 favourite, under a confident hand-drive by Yannick Gingras, won his pari-mutuel debut, paying $3.20, following up on a two-for-two record in baby races. In the battle for second, True Blue, with Tim Tetrick driving, got up and Broken Record, with Ron Pierce, held on for third by nine lengths.

It was a wire-to-wire effort for Saturday Mornings [$4.40] who trotted the mile in 1:57.2, finishing a length and three-quarters ahead of Demons N Diamonds. Southwind Cartier was third by two and three-quarter lengths.

All seven of the starters were daughters of Muscle Hill.

Stacia Hanover by Western Ideal popped out of the pocket in the stretch and out-sprinted the pacesetter The Show Returns for a half- length victory in the $25,500 first division of the New Jersey Sire Stakes for two-year-old pacing fillies in the third race.

Driven by Scott Zeron and trained by Steve Elliott, Stacia Hanover paced the mile in 1:59.1, with a last quarter in 25.4 seconds, after The Show Returns, with Brian Sears driving, cut slow, unpressured fractions. Rocknroll Allnight, rough in the stretch, survived an inquiry, finishing third by nine lengths.

Stacia Hanover, sent off at 3-5, paid $3.20. She was a $35,000 Harrisburg Sale purchase for David Van Duse of Madison, OH and Michael Cimaglio of Lyndhurst, OH.

In the second $25,500 filly pacing division, Cashaway [$3.40] held off challenges from Ideal Nuggets and Smart Zone to win in 1:55. Tim Tetrick guided Cashaway, a daughter of Western Ideal out of the proven producer CPA, to the neck victory with a half-length to Smart Zone in third.

The Tony Alagna trainee was a $105,000 Lexington Selected Sale purchase. She is owned by her co-breeder, Brittany Farms of Versailles, KY, in partnership with Marvin Katz of Toronto, Ontario.

Dealt A Winner [$8.20] paced a New Jersey Sire Stakes record for two-year-old geldings when he stopped the clock in 1:52.4 in the ninth race, the $27,000 first division for pacing colts and geldings.

David Miller brushed the Cams Card Shark gelding from sixth to the lead down the backstretch, taking command from race favourite Western Pioneer and would not be caught, winning by a length and a quarter. Hurrikane Ali gained ground in the stretch to finish second while Ticket To Roll was three and a half lengths back in third.

Dealt A Winner, trained by Edward Hart and owned by Jeff Snyder of New York City, was a $35,000 Harrisburg Sale yearling purchase.

In the $27,000 second division for pacing colts and geldings, Weapons Dealer by Western Ideal had the ammunition in the stretch to post a length and a half victory for driver Brett Miller over Too Darn Hot in 1:54.2. Mr Censi was four and a half lengths back in third.

Isaac Waxman trains for Brenda Waxman of Dundas, Ontario and Aaron Waxman of Burlington, Ontario, who acquired the White Birch Farm-bred colt for $10,000 at the Harrisburg Sale.

Wishing Stone, back in training after a busy breeding season, won his 2014 debut in Friday night’s sixth race classified trot.

Wishing Stone stood as a stallion at Deo Volente Farms in New Jersey, fulfilling contracts for 331 doses of frozen semen overseas as well as being bred to some 30 mares in North America.

The double-millionaire scored a half-length victory over Undercover Strike in 1:52.4. Yannick Gingras was at the lines of the Ron Burke trainee who campaigns for the Wishing Stone Syndicate of Flemington, NJ.