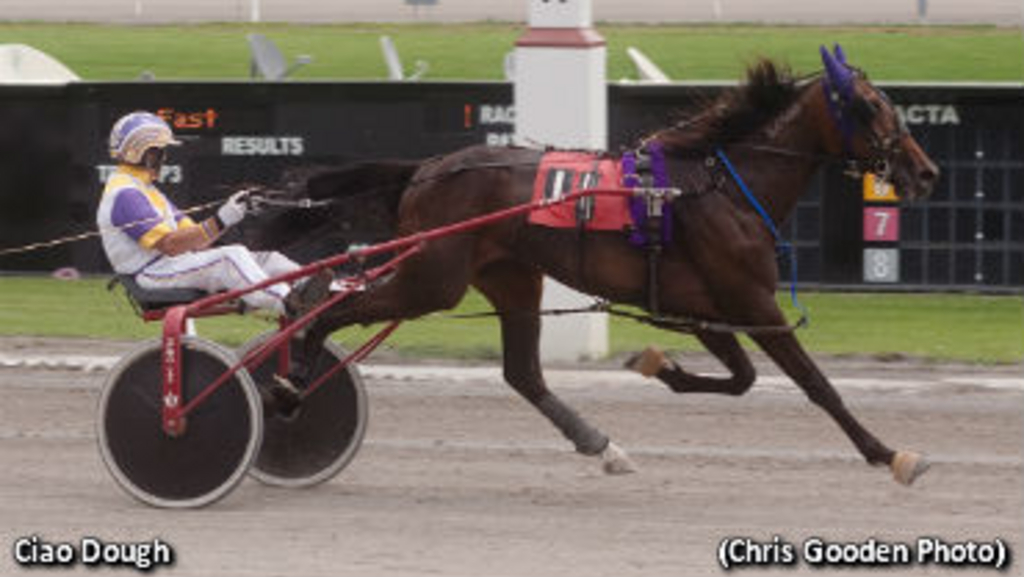 Making her career debut, Ciao Dough executed a decisive quarter-pole move like a polished veteran and want on to capture a division of Tuesday’s $40,000 Pennsylvania Stallion Series stake at The Meadows

. Backflip won the other $20,000 split in the event for two-year-old trotting fillies.

After Ciao Dough broke stride in her initial qualifier, trainer Aaron Hamilton rigged her with hopples, a change that agreed with her. She raced smoothly in her next qualifier and Tuesday brushed confidently for Dick Stillings when he moved her from third. She scored in 2:01.1, 1-3/4 lengths better than Barmaid, with Rylee Reagan third.

“She seems like a nice filly, but she is a little hot,” Hamilton said. “We don’t want to put her in over her head. She qualified in 2:04 with the last half in a minute and change. She’d have to go a little more than that for the sires stakes.”

Equipment played an even bigger role in the other division, taking the leader out of the race and nearly costing the winner her victory. The problems began when 1-2 favourite Deweyneedmorewine, on a comfortable lead down the backside and seemingly headed for a facile win, was victimized by what trainer/driver Ray Schnittker called a malfunctioning pulley in the hopple assembly. Deweyneedmorewine made a break that left the race up for grabs.

Backflip exploited the opportunity by moving to the lead from third. But when trainer/driver Ed Lohmeyer tried to pop Backflip’s earplugs, he discovered the string was missing. The plugs stayed in and Backflip struggled home in :32, still good enough to prevail in 2:03. Taylor Jean was a neck back in second while Lima Blue rallied for show.

“She got real lazy with the earplugs in. That almost cost me the race,” Lohmeyer said. “But she was good early, so that helped her there. I’d like to get her brave, let her race where she belongs and keep her in the stallion series.”

Robert and Lauren Tucker own Backflip, a daughter of Cantab Hall-Take The Plunge.

In the $22,500 Filly & Mare Not Listed Preferred/Preferred Handicap Pace, Spring Break enjoyed a pocket trip, then charged through the lane to erase a 3-1/2-length deficit and triumph in 1:51.4 for Mike Wilder, trainer Randy Bendis and owners Joann and Joe Thomson. Idol, who raced well first over, was 1-1/2 lengths back in second, with Autumn Magic third.