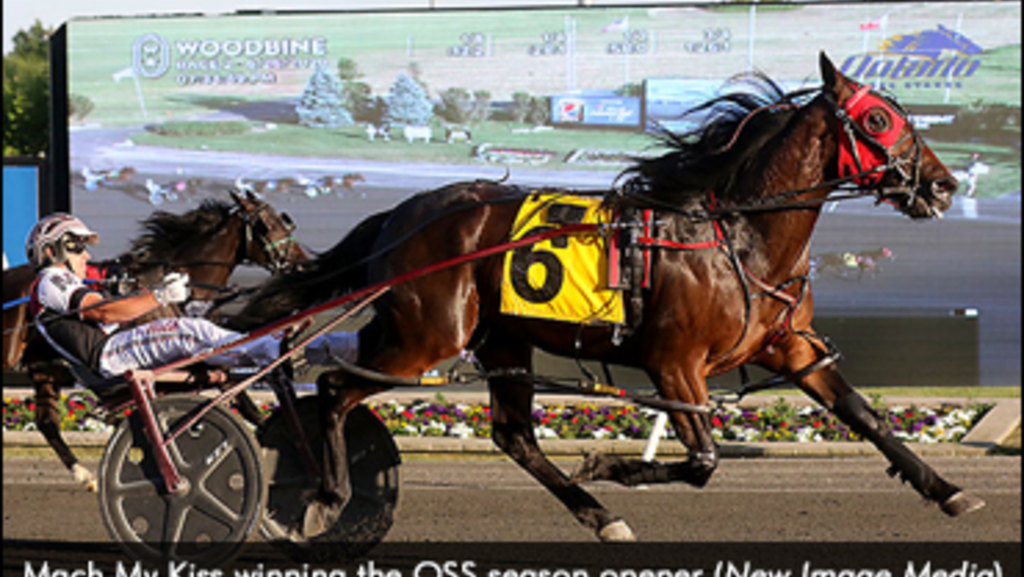 Mach My Kiss opened the campaign with a victory in the first $22,800 division, cruising along on the front end to a 1:53 personal-best with driver Doug McNair. Bettorthanbobbi finished two lengths behind the fan favourite in second, with Trafalgar three more lengths back in third.

Rob Fellows trains the Mach Three daughter for his wife Yolanda Fellows of Rockwood, Ont., and Erna Corbeil of Beaumont, Alta. Mach My Kiss was a three-time winner in the Grassroots last season, including a victory in the Semi-finals.

Got Power also made a return to the Grassroots winner’s circle, powering up the outside to catch pacesetter Sunshine Hall and hold off the late-closing Need Ur Opinion in the last division. The Royal Mattjesty daughter had a head in front at the 1:55.2 finish, with Need Ur Opinion edging out fan favourite Sunshine Hall for second.

“She had the outside in her first start back this year and drew better tonight,” said driver Chris Christoforou of Campbellville, Ont. “The plan was to be second-over but one of the inside horses made a break leaving so it turned into first-over, but she overcame it and raced great. She was a nice filly last year; she finished third in a Gold at Grand River.”

Tony O’Sullivan of Cambridge, Ont. shares ownership of Got Power with Gary Volpe of St. Thomas, Ont., and William Hill of Dundas, Ont. The trainer was pleased with the filly’s sophomore Grassroots debut, coming on the heels of a ninth-place effort from post nine in a June 12 overnight event.

“I’m happy with the result,” said O’Sullivan. “It was her first real race of the year, so a good step in the right direction and hopefully she can improve off that.”

Mia Culpa and Greystone Natali O made their debuts in the Grassroots winner’s circle with impressive efforts in the second and third divisions.

Mia Culpa and driver Rick Zeron sprinted from sixth to first in the final quarter to halt the teletimer at 1:53, a personal-best for the Shadow Play filly. Pacesetter Lyons Tilt Hanover finished second, leaving fan favourite Landry Seelster to settle for third.

The win was the second in three sophomore starts for Mia Culpa, who made just one appearance in the Grassroots at two. Jean Tourigny trains the filly for Quebec connections Roland Trudel of Becancour, Michel Damphousse of Louiseville and Guy Lavoie of Terrebonne.

In the third split, driver Sylvain Filion had Greystone Natali O on the move early from post five and landed on the rail behind fan favourite Mary Kat and Odds On Vero Beach. Content to sit third through a :26.1 quarter, :56 half and 1:25.2 three-quarters, Filion found himself with an open lane in the stretch as Odds On Vero Beach tipped out to attack and Mary Kat drifted off the rail. Greystone Natali O took full advantage of the opportunity and powered up the inside to a 2-1/2-length victory in a personal-best 1:52.4. Odds On Vero Beach and Mary Kat finished in a dead-heat for second.

The win was the fifth of the season for Greystone Natali O, who did not make her two-year-old debut until after the provincial program had wrapped up last fall. Since then, the Shadow Play daughter has been a model of consistency for trainer Brent Belore and owner/breeders Jean Caddey, Alana Belore and Dylan Belore, all of Embro, Ont., missing just one cheque in 14 starts.

The three-year-old pacing fillies will return to Woodbine Mohawk Park on July 14 for their second Grassroots start.

Ontario Sires Stakes action continues at the Campbellville, Ont. oval on Saturday, June 27 with six Grassroots divisions for the three-year-old pacing colts. The colts will open the program at 7 p.m. in the first race and also compete in Races 2, 5, 7, 8 and 10.