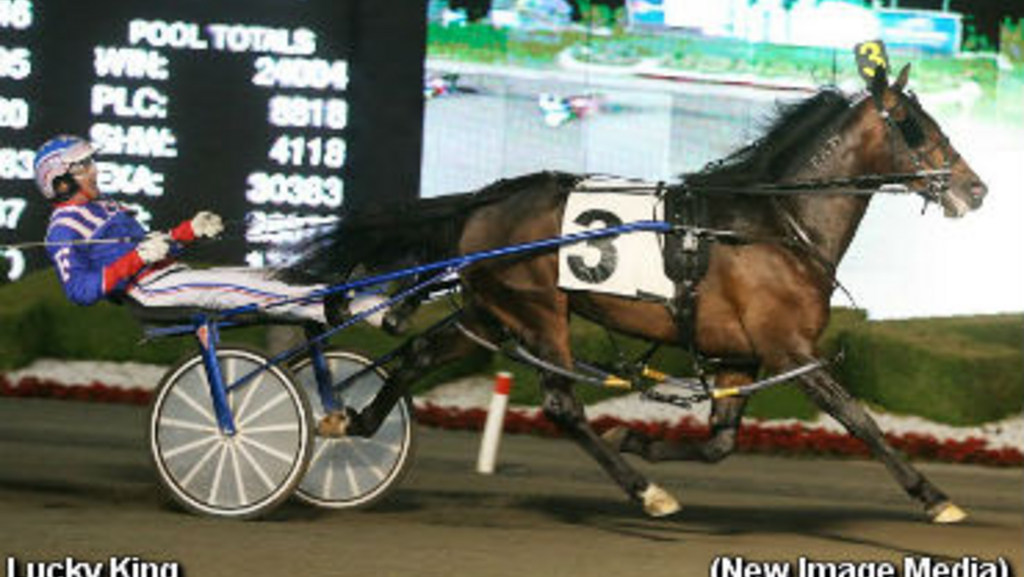 An army of two-year-old pacing colts and geldings converged on Mohawk Racetrack Thursday evening as the Campbellville oval hosted six OSS Grassroots divisions – each worth $15,000.

Cheeky Fool was a wire-to-wire winner in his assignment for driver Anthony MacDonald and trainer Cliff Hill. The son of Western Maverick-Kristens Sparkle shot to the lead from Post 7 and led the field through panels of :28, :57.3 and 1:27.2 before storming home in :28.1 en route to the 1:55.3 score. Zorro was 1-3/4 lengths back in second, with race favourite Sanattle Slew finishing third.

Sent off at odds of 7-2, Cheeky Fool won for the first time in two tries for owner Joshua Wade Jamieson of Hagersville, ON. The colt, who was a $2,700 purchase from last year’s Canadian Yearling Sale, has banked $8,244 to date.

Crafty Master kicked off cover to win the second division in 1:54.2 for Team McNair. Driven by Doug McNair and trained by Doug McNair, the son of Mister Big-Cam Odie watched O U Devil slice out splits of :27.3, :57.2 and 1:26 before using a :27.3 closing quarter to accelerate to the lead. Crafty Master won by three-quarters of a length over Rather Swell. Christas Wings took home the show dough.

Western Fella brushed to the front in the backstretch and held on to win by a narrow margin in his OSS Grassroots division. The son of Artistic Fella-Western Kisser and driver Paul MacDonell powered through middle fractions of :56.2 and 1:25.1 before using a :28.4 closing quarter to win by a half-length margin over Bringhome Theblue in 1:54. Twin B Shadow tagged along to finish third.

Trainer William Webb of Defiance co-owns the colt with partner Denny Miller of Archbold, OH, and together they watched him push his lifetime earnings to $8,300 with the victory. He was a $10,000 purchase from the 2012 Fall Speed Sale in Ohio.

On The Big Swing made his pari-mutuel debut a winning one for Team McNair in the fourth division. The son of Mister Big-Swinging Mistress enjoyed a ground-saving trip for the majority of the mile before popping off the pylons around the final turn and sprinting home in :27.2 for the 1:55.4 victory over Wace Bruiser, who was three lengths in arrears. V I P Bayama rallied from out of the clouds to finish third.

Sent off as the 3-5 favourite, On The Big Swing looked impressive for owner Suheil Ashkar of Liverpool, NY. The pacer was a $5,000 purchase from last year’s Morrisville College Yearling Sale.

Reasonable Force had equipment woes in his debut effort on June 20 and wound up finishing eighth as a result, but he had no such issues in tonight’s follow-up performance. The colt rallied from first-over and won in an impressive clocking of 1:54.4 for driver Paul MacDonell. The son of Shadow Play-JK Hello Dolly fended off late pressure from Major Homer and race favourite Three Of Clubs en route to the maiden-breaking win.

Lucky King took home the hardware in the final division winning in a time of 1:54.1 for driver Sylvain Filion and trainer Andrew McCabe. The son of Camluck-Red Carpet Queen held off a late-charging Weatherly, with P L Haymaker a distant third.

Andrew McCabe trains the full-brother to Red Carpet Dude (p, 1:51.3 - $$17,880) for the partnership of Glenview Livestock Ltd of Guelph-Eramosa and Leonard Christopher of Acton, ON. Lucky King was a $14,000 purchase from last year’s Harrisburg Yearling Sale.