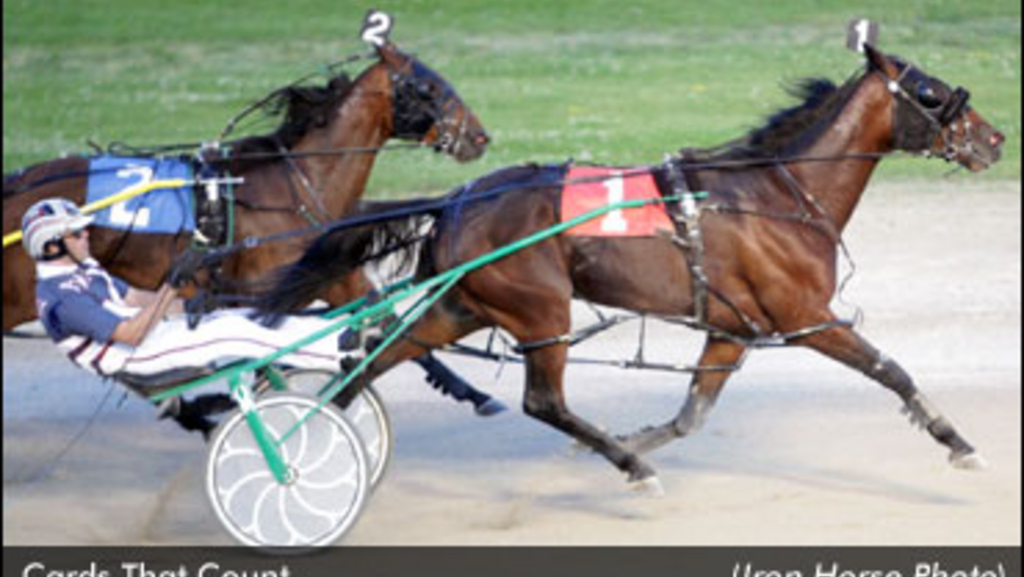 Cards That Count joined a talented trio of aged pacing mares in the Grand River Raceway record books with her 1:53.2 triumph in a $4,000 fillies and mares race on Wednesday evening.

After being forced back into the pocket by early leavers Local Art and James MacDonald at the :26.4 opening quarter mark in the sixth dash, Cards That Count and Anthony MacDonald played follow-the-leader through middle splits of :55.4 and 1:24. Meanwhile, favourite Sweet Bet and Trevor Henry advanced first over from fifth and edged out in front. As the new leader hit the three-quarters mark and cleared to command, Cards That Count moved back off the pylons in pursuit. Under the urging of MacDonald, Cards That Count swept by Sweet Bet in deep stretch to shave more than a full second off her lifetime mark and match the track record for aged pacing mares.

Latte Lady first set the divisional track record in August 2010 and then equalled the mark nine days later. The track record was equalled again by Exquisite Alberta and Racy Gal Hanover in June 2011.

Cards That Count is trained by Peter Core for Ontario owners Donald and Heather McGregor of Camlachie. The win was her fifth of the season from 22 starts. The five-year-old Cams Card Shark mare now sports a career record reading 8-13-13 in 77 starts with purse earnings of nearly $130,000.

Sent postward as the 3-1 third choice in the field of nine, Cards That Count paid $8.40 to win. Sweet Bet finished one length behind in second and Local Art followed five lengths back in third.

Wednesday evening's featured $7,000 Preferred 3 Trot was won by Flashback ($6.60) with Mario Baillargeon driving for his brother, trainer Ben Baillargeon. Fresh off a June 14 victory at Mohawk Racetrack, the popular six-year-old son of Classic Photo was a gate-to-wire winner in 1:57.4, scoring by nearly five lengths for owners Nunzio Vena of Bolton, Ont., Santo Vena of Brampton,Ont., and Denis Robidoux of Granby, Que.