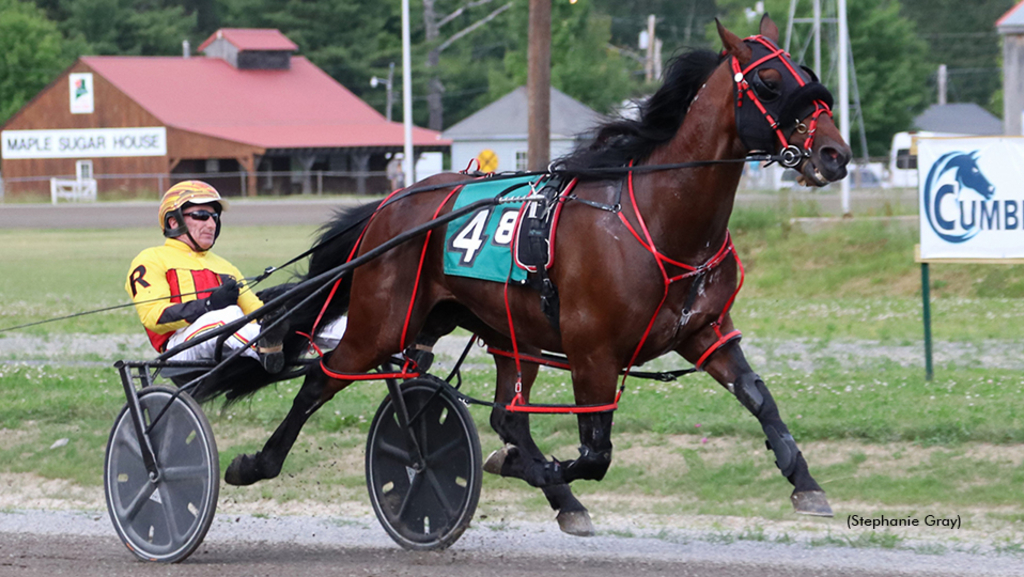 Captain Nash sprinted to the top in the $6,500 Open II Pace at Cumberland on Friday (June 24) and never looked back, securing his position as this week’s top gun in the upper echelon of Maine sidewinders and re-writing his own track record in the process.

Driver Bruce Ranger wasted little time in securing the lead with Captain Nash, clearing just past a :26.4 opening panel following a push by Call Me Maverick (Mike Stevenson) to test the favourite’s meddle.  As the field approached the half, Nagle (Dan Deslandes) was the first to move into the outer flow, followed by Roll With Dom (Drew Campbell).

After a :56.2 breather, Ranger let out a notch and Captain Nash responded by adding some separation on the rest of the field.  Just past a 1:24.3 third quarter, the leader was on top by four, and looking for more.

Captain Nash finished strong while Ranger had his whip tucked in 1:55, a new track record for an older pacing horse. He paid $4.20 to win the featured race of the day. Nagle finished second and Roll With Dom was third.

Owned by Reginald Duguay and trained by Richard Bartlett, the six-year-old Captaintreacherous stallion picked up his fifth win of the season and 18th of his career.

The afternoon card began with two divisions of the Maine Standardbred Breeders Stakes for three-year-old trotters.  The first $11,986 division, an early non-wagering event for sophomore fillies, was captured by Maplewood Slugger in 2:04.2 by driver Andy Harrington for trainer John Nason and owner/breeder Maxine Hadlock.  Trainer Valerie Grondin picked up the next two spots with Pembroke Honcho (finished seconnd) and Pembroke Faye (third).  All three were by trotting stallion Pembroke Slugger.

The first race on the betting card, the second $11,739 MSBS division for three-year-old trotting colts and geldings was captured by Katahdin Mark in 2:03.2 for trainer/driver Gary Hall for owners James Kelley Jr. and Betsey Kelley.  Katahdin Mark, a homebred son of Noble Venture, paid $12.80 to win.  Chamorro finished second and Wild Venture was third.

Walter Case Jr. led all drivers on the program with three trips to the Blue Seal Feeds winner's circle while Matt Athearn had two winners.