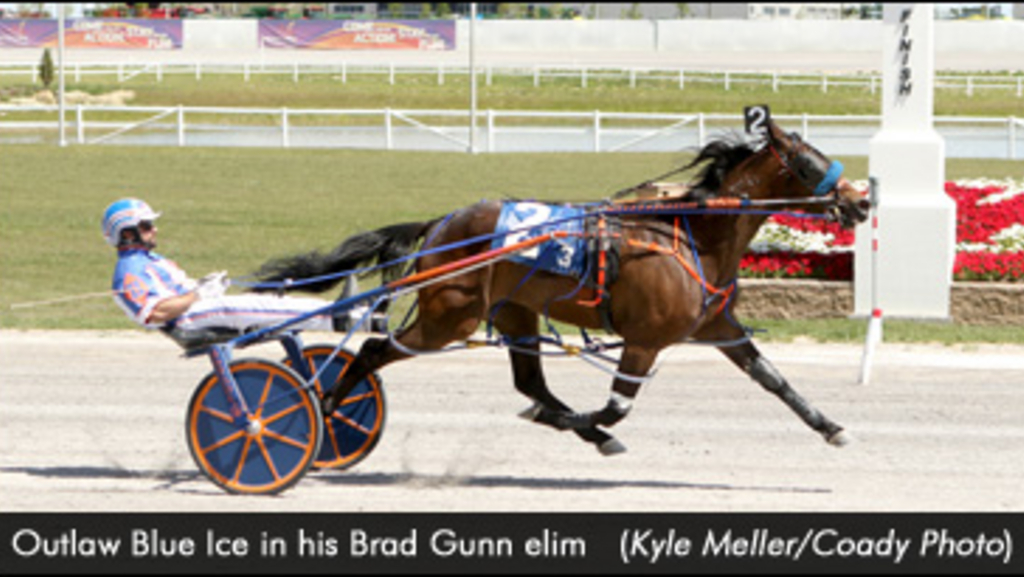 Undefeated in stakes action throughout his career, odds-on favourite Da Magician set his sights on his next conquest with a 1:55.1 winning effort in the first of two $7,500 Brad Gunn eliminations for horseman Serge Masse.

The Dragon Again-Hottie Hanover gelding looped early leader and recent Alberta Plainsman champion Mateo past the :28.3 quarter mark and carved out middle splits of :58.1 and 1:27.2 before finishing off his foes with a :27.4 final frame. Mateo (Jim Marino) followed one and a half lengths behind in second, finishing just ahead of the wide-rallying longshot, Wabash Cannonball (Phil Giesbrecht). Retros Mystery (Bill Tainsh Jr.) was fourth.

Outlaw Blue Ice followed in fifth-place for most of the mile before fanning wide into the stretch from third-over and kicking home to win by two and a quarter lengths. Getup Gideon (Phil Giesbrecht) came on for second while Senga Nitro (Ryan Grundy) finished third off a pocket trip. Cold Case (Bill Tainsh Jr.) was fourth after confronting the popular pacesetter Ima Dude (Brandon Campbell), who led through fractions of :27.3 and :56.2 until the 1:25.1 three-quarters mark.

Cardinal Rule turned in a career-best 1:56.1 performance to win the first of three $7,500 Meridian Farms Breeders Stakes eliminations for the fillies in rein to Jim Marino for rookie trainer Blaine Chappell and owner Ross Sharp.

The striking roan filly by Allamerican Navajo out of Cai Hanover, who was second-to-last in the early going, followed favourite Outlaw Fireball (J.F. Gagne) three-wide on the backside and out-finished that foe for the one-length victory. Outlaw Imahotvixen (Jamie Gray) also closed from the backfield to finish third in the mile that saw Legs Like Tina (Phil Giesbrecht) lead through fractions of :27.4, :56.4 and 1:26.2 before giving way to the late-closers.

Wedding Dance retook the lead from Tick Tick Kaboom past the :27.1 quarter mark and turned back all challengers through middle splits of :57.2 and 1:25.4 en route to the one and a half length triumph. Steady Breeze (Kelly Hoerdt) chased the winner home to finish second while longshot Take Me Im Yours (Tyler Redwood) was third.

Team Hennessy struck again for another elimination win with favourite Thats It in a career-best 1:56.1 mile for the Dragon Again-Thats No Lady filly, owned by Rod Hennessy, Lorne Duffield, and Jean Crochetiere.

Thats It established the lead from post two and cruised through panels of :28.1, :58.1 and 1:26.2 before drawing off by four and a quarter lengths for the victory. Single Minded (Kelly Hoerdt), the longest shot on the board at odds of 37-1, came on to edge out first-over advancer Pickles On Top (J.F. Gagne) for the second-place honours.

Overall on the 10-race Saturday card, the Rod Hennessey stable went three-for-three, while Mike ended the day with the most driving wins (four).

In other regular racing action on Saturday, the Marjorie Dumont-trained Tajmeallover circled a field of five in the $9,500 Fillies & Mares Open, rallying off the cover of Phone Terror to defeat that rival by a neck in 1:54.3. Driver J.F. Gagne shares ownership of the six-year-old Tajma Hall-Watch Over Me mare with Peter Van Seggelen, Carl Warnaar, and Tapron Holdings Ltd.

The $60,000 (guaranteed) stakes finals will both be contested next Saturday, July 1 at Century Downs.