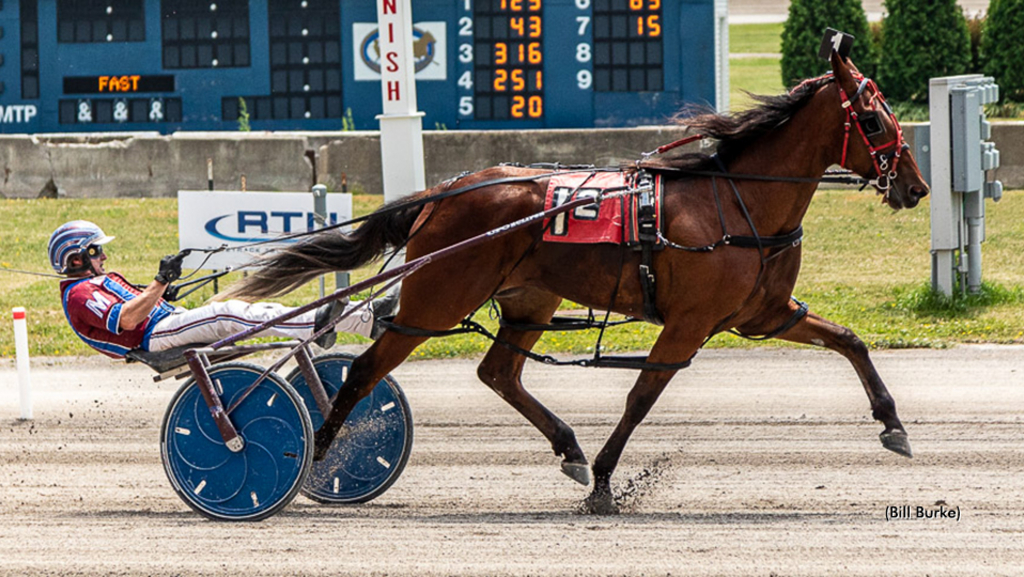 Vivians Dream had quite the debut on Wednesday (June 22) at Buffalo Raceway to break her maiden in her first pari-mutuel outing against state-bred company in a $53,500 division of New York Sires Stakes (NYSS) for two-year-old pacing fillies.

The hot, steamy afternoon was like a dream come true for Vivians Dream as she took her split with an impressive 3-3/4-length win over Beantown Babe in 1:54.4. Her time easily erased the old track record of 1:55.2 shared by A Girl That Twirls and April Angel in a dead heat on July 7, 2021 in the NYSS for the freshmen pacing fillies.

The afternoon was cut short however as heavy rain and lightning forced officials to call off the final five events. But fortunately all the Sire Stakes and Excelsior races got in before the severe weather rolled in.

Vivians Dream, starting from the inside, was able to take control early. With the favoured B On The Hunt finding trouble negotiating the first turn on a leave attempt, Vivians Dream set sail with splits of :28.2, :57.1 and 1:26.4 over the "lightning" fast track.

There was little drama down the lane as Vivians Dream (American Ideal-Sports Chic) threw down a :28 last panel to squash the hopes of the rest of the field. Beantown Babe was second best with Alabama Hannah finishing in third.

Vivians Dream, who came into the rest off two impressive qualifying wins at Harrington, is owned by Forrest Bartlett. Cory Mumford trains the $7.90 winner.

Doing Marvelous was just marvelous down the stretch and held on to defeat Seafood Beauty by a head.

Bama Breeze looked like the one to beat after posting splits of :28.4, :58.4 and 1:28.1. But those fractions proved to be too ambitious as she became leg weary down the stretch. Doing Marvelous in the meantime was able to gobble up the four-length disadvantage she had coming into the last panel and held off a hard charging Seafood Beauty in a 1:58.4 mile. Turn On The Charm finished in third.

Owned by Frank E. Chick, Doing Marvelous (Bolt The Duer-Marvalous Joy) has now earned $30,175 on the season. It was her first win in two 2022 appearances. Jim Morrill Jr. and trainer Cory Mumford teamed to deliver the $3.10 winner.

In the $15,000 Excelsior A Series, Flippin Awesome and driver Drew Monti came from a dozen lengths back at the half mile marker to collect the $30.40 victory over Southwind Rye in 2:01.

Surr La Faire and driver Wade Tomaszewski captured the non-betting $6,400 Excelsior B race with a 2:04.4 score.