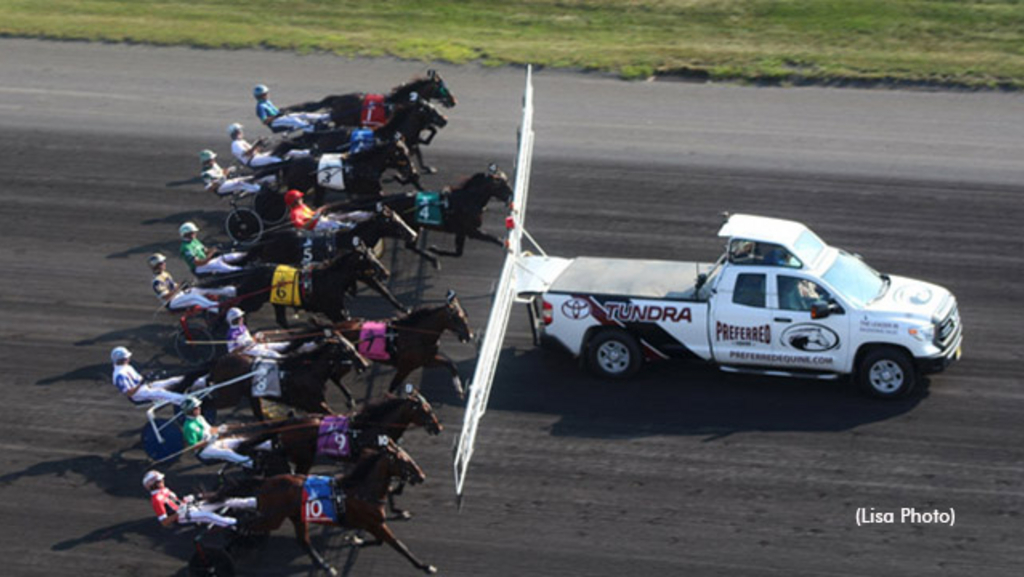 The third leg of the Graduate Series will highlight Saturday’s card of racing at The Meadowlands, with six divisions going postward for the four-year-olds.

Bella Bellini will take on just four foes in this compact division.  Dexter Dunn guided the Richard ‘Nifty’ trainee to a third-place finish in the Armbro Flight Stake in her latest, and he’ll be back aboard the daughter of Bar Hopping-Bella Dolce this Saturday evening.

Herculisa figures to put up a good fight based on the 2-0-1 record she’s assembled so far this season from just four assignments.  David Miller is slated to driver the Virgil Morgan, Jr. trainee from Post 2.

Rattle My Cage totes a two-race winning streak into this tilt, with his latest victory coming in an eye-catching clocking of 1:50.2 for trainer Ake Svanstedt.  Yannick Gingras is listed to pilot the son of Love You-Caress The Senses from Post 4.

Cuatro De Julio marched to a 1:51.1 victory in a trip to Kentucky earlier this month, and he’ll look to build on that massive effort from Post 6 for the tandem of driver Andy McCarthy and trainer Marie Ortolan Bar.

The second division appears to be a wide-open contest which features Ahundreddollarbill fresh off a 1:50.2 triumph at The Meadowlands.  Todd McCarthy engineered that win, and he’ll depart from Post 2 with the Tony Alagna pupil on Saturday evening.

Sonofamistery has racked up three wins from five starts this season, and he’ll try to bolster those impressive stats for the duo of driver Brian Sears and trainer Marcus Melander.  The son of Muscle Hill-Mistery Woman will leave from Post 4.  He was a Graduate Series winner over the oval on May 7.

Test Of Faith will look to keep the ball rolling for driver David Miller and trainer Brett Pelling, who watched the daughter of Art Major-Cannae Cammie rally to an impressive win in last weekend’s Roses Are Red Stake.  She now owns a 3-1-0 record from five starts this season, and the 2021 U.S. Horse of the Year will depart from Post 1 in her quest to add to her bankroll that stands in excess of $1.7 million.

Carbine is the hot horse coming into this contest based on his three-race winning streak for trainer Tony Alagna.  The son of Somebeachsomewhere-Shot Togo Bluechip will leave from Post 1 for driver Todd McCarthy, who guided the 10-time winner to a 1:49 triumph in a leg of the Graduate Series at on June 4.  He was also a Graduate Series winner at The Meadowlands on May 7.

There’s a heavy Canadian presence in the second division thanks to the likes of Bulldog Hanover and Linedrive .

Bulldog walloped a good group of older foes in a Free-For-All event at on June 11 for trainer Jack Darling, who has shipped the son of Shadow Play-BJs Squall to the barn of trainer Noel Daley.  Dexter Dunn gets tapped on the shoulder to babysit the 17-time winner from Post 6.

Linedrive will make the trek with driver James MacDonald and trainer Anthony Beaton.  The son of Betting Line-Lillian was a bang-up second to Jimmy Freight in last Saturday’s $100,000  Mohawk Gold Cup Invitational.  He’s already racked up 11 wins this season.

I hope Linedrive Hanover does as well in The USA as Bulldog Hanover did last fall; he went undefeated in 4 stakes events at Hoosier Park. On the other hand, Sock It Away, (in 2019), Major Custard, (last year), and just this spring, Woodmere Stealdeal all made trips to The States to race and the results were disastrous.