Jason Dillander made a special appearance at the Madison County Relay for Life on Friday, June 17. Known as the 'Bad Boy' in the Fab Five Celebrity Standardbred Driver promotion, Dillander represents the American Cancer Society during all fundraising events with the promotion. 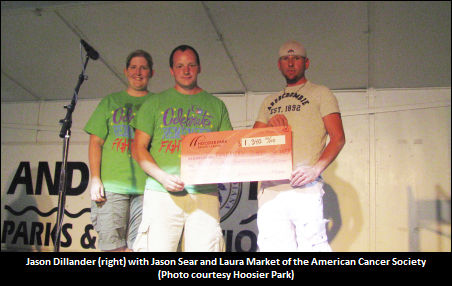 A native of Kentucky, Dillander is one of the original drivers involved in the Celebrity Standardbred Driver promotion. He chose the American Cancer Society as his charity of choice because his father was stricken with cancer and passed away from the disease in the spring of 2010. Dillander worked hard last season to pull in money throughout several different events for his charity, including a win in the $5,000 Hoosierdega exhibition race. He also provided rides to racing fans during Charity Chariots in 2010, adding to the tally.

“It feels really good to honour my father with this donation,” said Dillander. “I’m glad I’m able to give back.”

Dillander is currently ranked sixth in the track's standings in 2011. He recently celebrated his 1,500th career win. Now in his 14th season as a driver, Dillander completed his sixth consecutive year with purse earnings in excess of $1 million and is in line to hit that mark again in 2011, already half way there with just under $500,000 in purse earnings.

Charity Chariots will conclude for the 2011 season Saturday, June 25. Racing fans will have one last opportunity to take a ride behind a real racehorse at Hoosier Park with one of the Celebrity Standardbred Drivers. The fee of $20 goes directly to the driver of choice for the guest. Rides begin at 3:30 p.m. in the Grandstand Paddock and conclude at 4:30 p.m.