On a night of events and fundraising activities for the American Cancer Society, trainer and breast cancer survivor Linda Toscano has something special to look forward to.

Toscano will send out 2011 Hambletonian finalist Chapter Seven in his four-year-old debut, the $40,000 Titan Cup Prep, on Saturday at the Meadowlands. Earlier that day, the Meadowlands will hold a 5K on the track to benefit the American Cancer Society’s Making Strides Against Breast Cancer program. The third annual Lisa Photo Stride For The Cure harness race is also set for that evening. Horses and drivers will wear pink equipment that will be auctioned off, along with other special items, to benefit the charity. 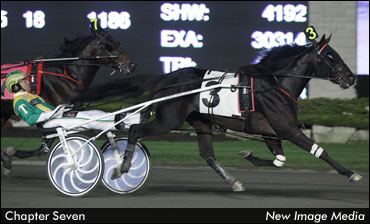 Tim Tetrick will drive Chapter Seven, a son of Windsongs Legacy, from post three in the Titan Cup Prep. The prep contenders will return for the $201,700 Titan Cup final on Friday, June 29. Owned by Richard Gutnick of Blue Bell, PA, Gary Cocco of Newtown Square, PA, Southwind Farm of Pennington, NJ, and Jerry and Theresa Silva of Long Beach, NY, Chapter Seven sports 12 wins in 18 career starts, and earnings of $932,333. He was a $42,000 yearling purchase at the Harrisburg Sale.

Last year, Toscano won her second Breeders Crown with Chapter Seven in the $612,379 Three-Year-Old-Colt Trot at Woodbine. He won by commanding seven lengths in 1:53 with Jeff Gregory in the sulky, and the victory capped a challenging sophomore season riddled with sickness and lameness.

“It’s difficult to explain how much his Breeders Crown win really meant to us,” said Toscano. “It was like redemption for him, for me and everybody involved. He had overcome so many problems, and I’ve got to give credit to the owners for never pushing him to race. They always wanted to do right by the horse. We wanted him to grow, to do well and compete at that top level.”

Following a fifth-place finish in the Canadian Trotting Classic at Mohawk, Toscano gave Chapter Seven a couple of weeks off to prepare for a fall campaign. The colt bounced back with a rousing 1:52.4 score in a $113,000 Bluegrass division at The Red Mile.

“I had taken him to Lexington , and I was hoping the others would beat themselves up in the Kentucky Futurity,” recalled Toscano. “Then I would have a fresh horse. Well, you’ve got to like it when your plan works out!”

Chapter Seven followed up with a convincing 1:53.2 Breeders Crown elimination victory at Woodbine with a final quarter of :26.4, setting him up as the favourite going into the final.

Despite a last-minute driver change, Chapter Seven delivered a homerun.

“When Tim Tetrick didn’t make it to Woodbine, thankfully, Jeff Gregory was there, and it was almost like a full circle moment. He had driven the horse in the beginning, and I believe in karma coming around. I told Jeff I liked the way he was coming into the race and it was his night to shine.”

Chapter Seven completed his three-year-old season with a second as the beaten favourite in the $174,940 Matron Final after winning his elimination in 1:53.4.

“After we shipped him home from Canada he had lost a lot of weight, and I probably trained him a little light going into the Matron. It might have also been the culmination five races in a row, and he hadn’t done that in awhile. He relaxed once he got to the lead, and hey, sometimes they just get beat.”

Off a pair of impressive qualifiers in 1:51.4 and 1:54.1 [final quarter in :25.4] at the Big M, Chapter Seven looks ready to make a smooth transition into the open ranks on Saturday night.

“The key thought diving into these deeper waters is simply don’t hurt him. I believe in this horse. He’s incredibly talented. He’s healthy and we have to keep in mind he’ll be facing some seasoned veterans. He’ll come to himself eventually and compete with these. He’s only had 18 career starts, but horses don’t do what he’s done to come back as strong he has. Tim Tetrick is planning on driving him on Saturday, and then he’ll hop on a plane to Pocono Downs.”

Toscano, the leading female trainer in the history of the Meadowlands Racetrack, has good reason to be pumped up about her prospects this season in the sport’s major events. Among the game’s most successful conditioners, the Brooklyn , NY native comes off the most productive season of her distinguished career in 2011 with 129 wins and $3,718,740 in purses.

Chapter Seven gave Toscano her first start in the Hambletonian in 2011, resulting in a fourth-place finish. She looks for a return visit in 2012 with Market Share. Last Saturday at Mohawk, the colt by Revenue S finished fifth as the beaten favourite in the $351,000 Goodtimes Final for Tim Tetrick. He had won his elimination from post nine in 1:53.2.

“Market Share was just too far back with dull cover and he was flat out flying at the finish. He trotted a back half in :54.2, last quarter in :27 and a 1:52.3 mile. I can’t fault the horse. It was just bad racing luck.”

Toscano also has a major player on the road to the Meadowlands Pace in New York Sires Stakes champion Heston Blue Chip. The son of American Ideal set a track record of 1:49.2 at Tioga Downs in the $55,688 Historic on June 17 with Tim Tetrick in the bike. The colt is three-for-three this season, 14 for 16 lifetime with two seconds, and has banked $466,337 for owner Kenneth Jacobs of Baldwinsville , NY .

“We’ll see how Heston Blue Chip matches up in the open three-year-old ranks. I mean, if you teach a horse to win, you give him a career. Our goal was to not send him to the North American Cup, and to keep him brave and fresh. He’ll be strong and confident going into the Meadowlands Pace eliminations. This is the way we mapped it out for him, and maybe a fresh horse like him can win it.”