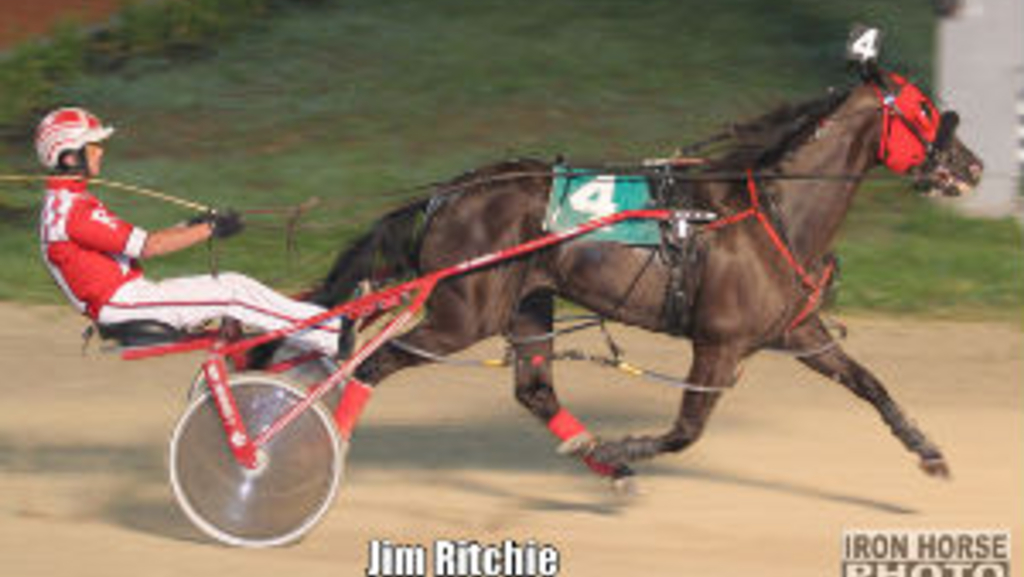 According to Grand River officials, driver Jim Ritchie suffered a broken leg. Randy Fritz and Scott Zeron, who were also ejected from their racebikes, suffered minor injuries but bounced up and continued to drive.

The accident occurred when Nearly Naked made a break and fell in the first turn, throwing driver Ritchie to the track. Jetta Baran, who couldn’t avoid the fallen horse, catapulted Fritz from his bike. Fritz, who managed to keep hold of the lines, was dragged briefly before he pulled his horse to a stop. Scott Zeron, who was driving Cruisin Lady, was flipped out of his bike and dumped to the track. Cruisin Lady did a full circuit of the track before falling when her racebike struck a light standard.

According to the ORC vet, the only horse that suffered a serious injury was Cruisin Lady. A non-life threatening hip injury will confine her to stall rest for an extended period. Both Nearly Naked and Jetta Baran suffered only scrapes and cuts.

Additional updates will be posted when details are made available. In the meantime, please join Standardbred Canada in wishing all participants and horses a speedy recovery.

Just a few words of thanks

Just a few words of thanks to fellow horsemen who came to my assistance at the time of the accident with Cruisin Lady. Perhaps we can use the incident to generate better guidelines that may prevent future 'post-accident' injuries to both horses and participants. Cruisin Lady is showing positive signs of improvement on a daily basis. Thanks again. Bryan

this kind of incident is

this kind of incident is truly more detrimental to the fans of harness racing than whipping will ever be. lets wake up and address the real issues. the judges should be totally embarassed to let this kind of injustice happen. do they ever have to take any kind of training or go to courses to update their knowledge of the rules and what to do in irregular situations like these. come on orc?

My wife and I were at this

My wife and I were at this race and were shocked that there appeared to be absolutely no mechanisms in place to stop the race as soon as it was apparent that it was dangerous to have the race continue. Is there no warning system to alert drivers that they should stop their horses in a safe manner as soon as possible? I did see a red light flashing on the timer, but it obviously had no effect.

isn,t that what the starting

isn,t that what the starting car judge is there for? should they not have the authority to stop a race when these kind of situations arise. there seems to be a whole string of unanswerred questions of what the process is, or needs to be! the only people who suffer again are the drivers, trainers and the animals themselves. again, the judges are not posting their take on the situation and again there is no accountability on their behalf as to why the precautions were not taken to stop the race. there are other issues to deal with other than the whipping rule.

Has anyone noticed that no

Has anyone noticed that no horse ran back into the paddock? Grandriver closes the gates to the track so that the horses are contained in the event that there is a run away.
Sounds like a good idea for all tracks, I can think of twice in the last year at two tracks were I saw horse run unattended back in to the paddock.

Chris you're missing my

Chris you're missing my point, I know if you race anything there will be accidents whether it's cars or horses. If a horse falls down in a part of the race when the field has to come past that area again, the race should be stopped, so you don't have the rest of the field pile in. If I have a loose horse running around a track I would rather it not go head on into a light standard when it can be avoided with some safety precautions. I love harness racing but it needs to think how can it be made better.

Outrider!!! Where was the

Outrider!!! Where was the Outrider???? There is danger in every sport, so have an outrider to catch the loose horses for the safety of driver and horse.

In reply to I just saw the replay of by joeysfishandchips

Sorry to agrue with you bud

Sorry to agrue with you bud but to Be honest I don't think they can do much about the Light Standards but maybe move the to The Outside of the track but I mean Accidents happen Bro You gotta relieze that horse makes a Break stumbles on a hobble goes down I mean What are you gonna do about that make it so that no horses wear Hobbles sorry but that just leaves Trotters and I mean whats the excitment in that man??? I mean look at the 8 horse pile up at Woodbine horse Stumbled on his hobbles and went down all you Can do is sit there and Pray that no horse or Driver was Injured you have a good point man but you gotta think of suggestions before you Complain bud

If their was real concern

If their was real concern for the safety of horses and drivers(there is not)then imediately upon something happening as did in Grand River, the judges would be instructed to have the track annoincer immediately call a no contest and the drivers pull up their horses. Of course this would mean a full pari mutual refund and everything must be done and tolerated to prevent that. The "unfair start pole" is another sickening example of the maximization of the handle at the expense of the betting public to say nothing of the safety issue. If you watch the race from Grand River you can see Pendo Star driven by Jim Mclure leap away from the horse that was lying on the track and he came close to the loose horse on the track. It could have been disasterous and only the short sigted greed allows for it to possibly happen!

In reply to I just saw the replay of by joeysfishandchips

You are so right Ken, I was

You are so right Ken, I was shocked when the judges didn't declare the race a no contest right away with Ritchie and his horse in obvious hardship on the track, it reminded me of the chariot race in Ben-Hur where everything went! It's a miracle someone wasn't killed.

I just saw the replay of

I just saw the replay of this race. Come on harness racing start thinking safety. If there is an accident that will interfere with the outcome of a race or put horse or driver at risk, it should be stopped. The removal of the hub rail was a great idea but for light poles and other objects there needs to be a rail to keep horses out of the infield while still leaving a safety lane for racing.