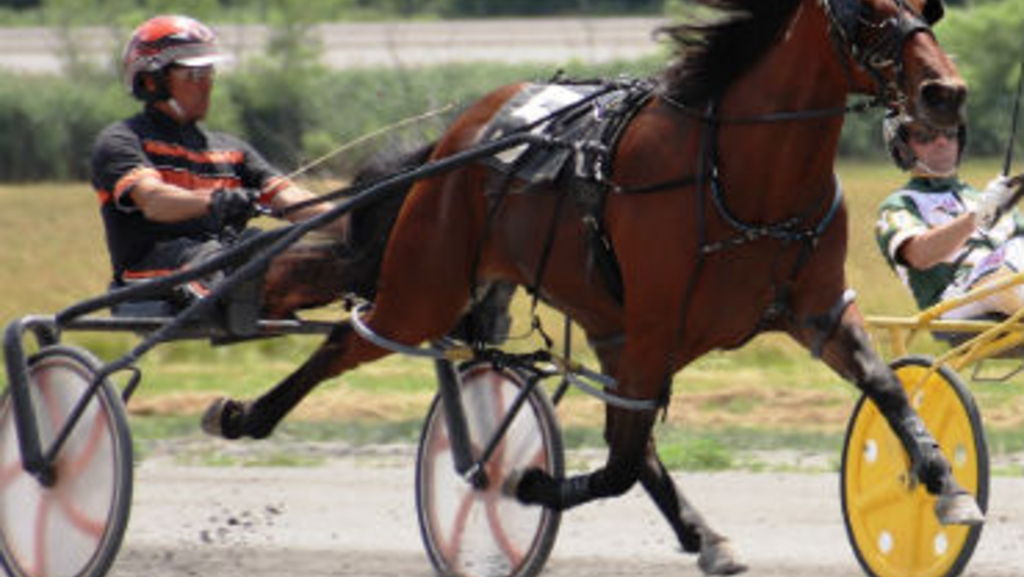 Dave Van Wart walked away from Gaitway Farm wearing a broad smile this morning, but that’s not unusual. Van Wart, who grew up near the training facility and still lives in the area, has owned harness racing horses for the past six years and spends as much time as possible watching them prep for the races at trainer Tom Fanning’s stable.

“This is my stress relief,” he said with a grin. “It’s really enjoyable for me.”

But his smile was a little extra special Monday after watching his two-year-old female pacer Zuluwarriorhanover win one of the morning’s 10 qualifiers for freshmen at Gaitway. Zuluwarriorhanover, driven by Andy Miller, beat Step Beyond by a nose in 1:56.1 in her first qualifying try of the season despite a gusty headwind.

“I thought she raced fantastic,” said Van Wart, who owns a nursery and landscape business. “She was very good, very strong. Tom does an excellent job. I was excited to watch her. Anytime you buy a yearling it’s nice to see them do that. We’ve staked her to a few nice races. I really enjoy the horses.”

Van Wart wasn’t alone in having reason to smile. Trainer Ron Burke sent out six winning two-year-olds, including colt pacer JK Wildfire, who won in 1:55.3 with driver Yannick Gingras to set the day’s best time by a pacer. Trainer Julie Miller won two qualifiers, both with colt trotters, including day’s best Mets Hall in 1:57. Trond Smedshammer, who won with filly trotter Chaperess, rounded out the list of trainers with wins.

Zuluwarriorhanover is a daughter of Somebeachsomewhere out of the mare Zellweger Bluechip. She was purchased for $52,000 at the Standardbred Horse Sale and is a full sister to stakes winner Zane Hanover. The family also includes millionaire Fashion Delight as well as 2016 Empire Breeders Classic three-year-old filly champion No Clouds Bluechip.

“Dave had her on a very short list of horses he liked,” Fanning said. “It worked out well because we both liked her. She was a little small, but I loved her pedigree.”

Burke’s JK Wildfire (Somebeachsomewhere-Bittorsweet Terror) won in 1:55.3 after finishing second in his first qualifier on June 5. He was purchased for $175,000 at the Standardbred Horse Sale and is owned by 3 Brothers Stables. He is a half-brother to stakes winner Chip Walther and his second dam, stakes-winner Swifty But Nifty, is the mother of millionaire Cam Swifty and multiple-stakes-winner Lonesome Day.

Youaremycandygirl, driven by Gingras, won her second qualifier of the month, this in 1:55.4 after going 1:58.4 on June 5. Youaremycandygirl (American Ideal-Sweet Lady Jane) was purchased for $150,000 at the Standardbred Horse Sale. The filly’s second dam is Sweet Future, who is the mother of Pacer of the Year Sweet Lou (a former Burke Stable star) and multiple-stakes-winner Bettor Sweet.

Lets Fall In Love (Rock N Roll Heaven-Time N Again) and Gingras won in 1:56.3. She was purchased for $150,000 at the Lexington Selected Sale and is a full sister to New York Sire Stakes champion Band Of Angels and a half-sister to millionaire Romantic Moment.

Go West Go Fast (Western Ideal-Female Champs) and driver Joe Bongiorno won in 1:56.4. He was purchased for $32,000 at the Standardbred Horse Sale and is owned by Burke Racing Stable, Frank Baldachino, Silva Purnel & Libby, and Weaver Bruscemi. He is a full brother to stakes winner Ideal Champ.

Belles Delight (Bettor’s Delight-Sanabellevalentine) won in 1:58.3 with driver Matt Kakaley. She was purchased for $50,000 at the Lexington Selected Sale and her second dam is millionaire Sanabelle Island.

Dbomb (Explosive Matter-Machita) and Gingras won in 1:59.1. She was purchased for $65,000 at the Lexington Selected Sale and is a half-sister to stakes winner Blue Porsche.

“It was another good day,” Burke said. “It’s tough to get a read because of the headwind today. It’s hard for babies to come off a turn and face a 20-mph wind and just keep hammering through it. Any that hung in are good horses. I think it was a little easier to sit and try to slingshot past late. But whatever they’re getting home is legit. It’s not wind-aided, it’s wind-impaired.

Mets Hall (Cantab Hall-Mets Inn) won in his first qualifier of the year. He was purchased for $132,000 at the Standardbred Horse Sale and is owned by Stroy Inc. and the Andy Miller Racing Stable. His family includes 2009 Horse of the Year Muscle Hill.

Cant Afford It also won in his first qualifier, stopping the timer in 1:59. The son of Cantab Hall-Nothing But Moni was purchased for $120,000 at the Lexington Selected Sale and is owned by Stable Why Not. His second dam is two-time Horse of the Year Moni Maker and his family includes newly-minted Goodtimes Stakes champion International Moni.

Both horses were driven by Andy Miller.

“Mets Hall has been a nice horse training down the whole time, a model of consistency,” Julie Miller said. “We have high hopes for him and so far so good. I’ve liked him since the word go. He’s got an aura about him. He’s built well and he’s got a good head on him. He’s got that ‘it’ factor.

“Cant Afford It trained down in the Netherlands, so he came to us a little late. He’s not staked until later in the year and we’re really taking our time with him. Andy said he was super today. He’s a really nice colt.”

Chaperess (Chapter Seven-Wedding Dress) won in 1:59.1 for driver David Miller and owner Purple Haze Stable. The filly trotter was purchased for $55,000 at the Standardbred Horse Sale.

“It was her first time behind the gate and she was very good, very professional,” Smedshammer said. “She was training good all winter, but she got set back three weeks because we found out she had a chip in a hind ankle and we had to operate in March. That’s why she is a little bit behind the other ones. But I like her.”

For the complete charts from Monday’s qualifiers, click here.