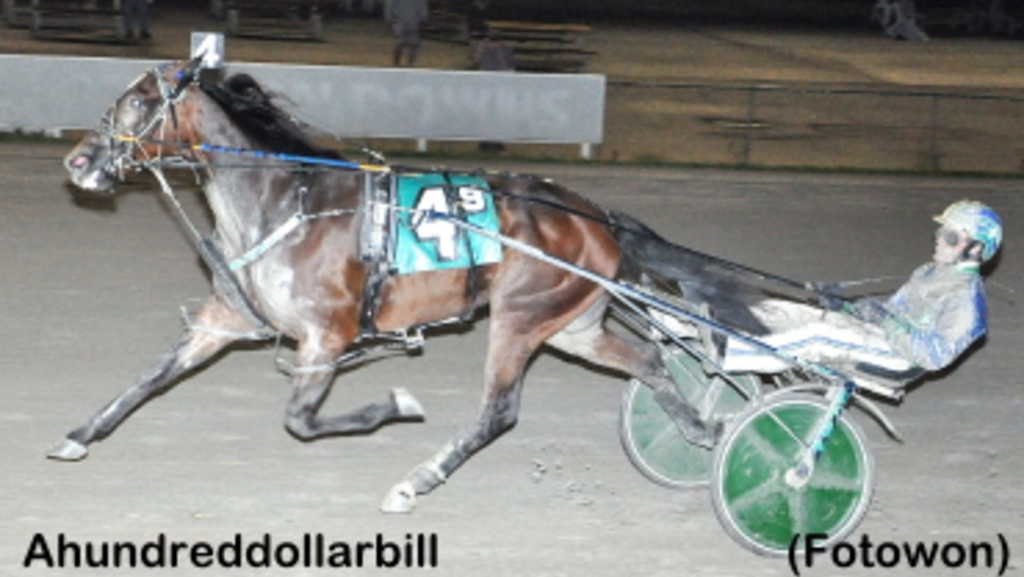 Sophomore trotters found themselves in spotlight Friday at Vernon Downs in three divisions – two for the gals and one for the guys - of the Empire Breeders Classic.

Ahundreddollarbill reigned supreme in the $205,500 event for the colt and gelding trotters, and that was much to the delight of the favourite players that sent him off as the 4-5 choice in the rich affair.

Andrew McCarthy got away third with the Tony Alagna trainee while Ambassador Hanover and Incommunicado battled to the opening quarter in :27. Incommunicado eventually took charge and went on to post middle panels of :56.4 and 1:26. McCarthy went on the attack in the third quarter with Ahundreddollarbill, and he was at the wheel of the leader as the field headed into the final quarter of the contest. Ahundreddollarbill kicked home in :27.2, and that was enough to earn him the win by 2-3/4 lengths over Ambassador Hanover in 1:53.2. Incommunicado settled for third prize.

The son of Chapter Seven-Swinging Royalty, who is owned by Crawford Farms Racing and James Crawford, is now 3-for-3 this season after going 2-for-6 in his rookie year. The lion’s share of the purse bumped his overall bankroll to $208,362.

Iteration also won as she pleased in the first of the two $102,500 divisions for the trotting fillies.

Sent off as the 2-5 favourite, Brian Sears got away second with Iteration while Contested Hanover sprinted to the top and chopped out an opening quarter clocked in :27.3. Sears quickly moved his charge to the top and together they sliced out remaining splits of :56.4 and 1:25 before using a :28.1 final frame to win by 1-1/2 lengths over Contested Hanover in 1:53.1. Moni For Lindy tagged along to finish third.

Marcus Melander trains the daughter of Chapter Seven-Steamy Windows for Courant Inc of Delray Beach, FL. She’s now 2-for-2 this season after recording a 5-1-2 record from 10 starts as a freshman. The $51,250 payday bumped her overalls earnings to $394,759.

The favourite parade continued into the remaining division as Darlene Hanover was a front-stepping winner for driver Andrew McCarthy.

Brett Bittle trains the daughter of Chapter Seven-Danielle Hanover for Yankeeland Partners LLP of Frederick, MD. After compiling a 4-1-0 record from eight starts as a rookie, the filly now boasts a 1-1-0 record this season from just two trips to the track. Her share of the loot lifted her lifetime cash stash to $305,442.