Off nearly two months, Rainbowinthewest got a welcome pocket trip and converted it to victory in Wednesday's (June 16) co-feature at The Meadows, a $10,300 conditioned trot. 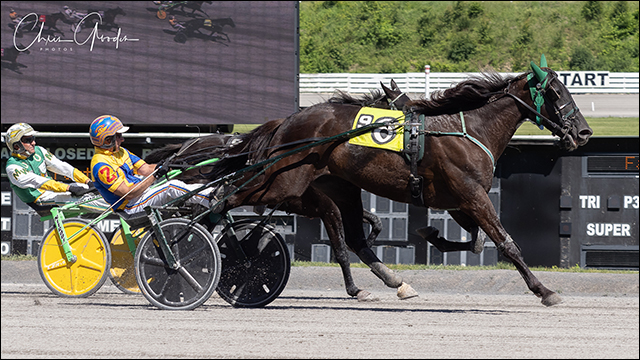 In Wednesday’s co-feature, a $10,300 fillies and mares conditioned pace, Amelias Courage A pulled off a 12-1 upset for Dan Rawlings, trainer Richard Perfido and owner Win Rhythm Stables. The seven-year-old daughter of Courage Under Fire and American Dreamer prevailed in 1:52 to vault over $200,000 in career earnings.

Elsewhere on Wednesday’s card, Allnight Micki (Downbytheseaside-Allamerican Coed) became the first two-year-old pari-mutuel winner of the year at The Meadows when she threw down a :27.1 final quarter to hold off Spitting Image (Yankee Cruiser-Janettes Image) in 1:56.4. Bet On The Bay (Betting Line-Whos Up Whos Down) completed the ticket. Dave Palone piloted the winner for trainer Tim Twaddle, who owns with Micki Rae Stables.