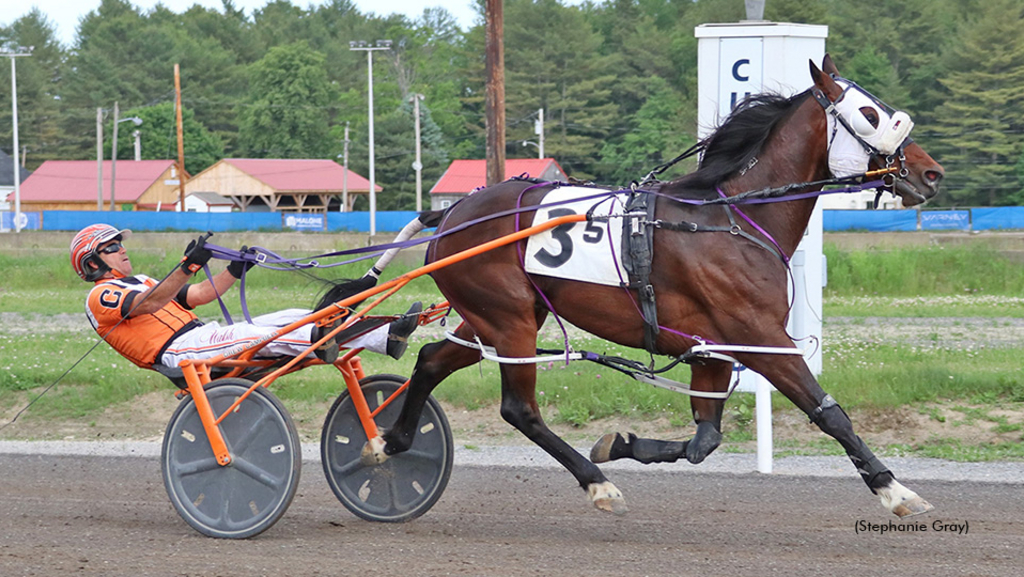 Airspinder, one of the winningest horses in the state of Maine in 2021, returned to his previous form to fly home in 1:55.1 and land in the First Tracks Cumberland winner's circle on Saturday (June 11).

The duo of leading trainer Chris Lefebvre and leading driver Drew Campbell were singing a familiar tune in the featured $5,200 conditioned pace, as Airspinder turned on the afterburners and cruised to victory.

Scoring from post three, Campbell settled Airspinder into the four-hole as Dan Deslandes rocketed from behind the car with Some Gold, setting fractions of :28 and :57.2 with the field spread out.  At the half, the outer flow started to materialize with Cool Jack (Matt Athearn) flushing Campbell and Airspinder from the pylons to move up first-over and continuing to gain momentum.

At a wicked 1:25.4 three-quarter clocking, Airspinder was well on his way and had poked a head in front of a tiring pacesetter Some Gold.  Through the turn, the rest of the field could do nothing but chase the six-year-old son of No Spin Zone as the pacer opened up 5-3/4 lengths to cruise down the stretch in a new seasonal mark.

The winner is owned by Michelle Lefebvre and Brian Aaskov.

Bruce Ranger won two races on the card, including the $5,000 Maine Sneak Peek for three-year-old pacing fillies with Sweet Baby G, upsetting the heavy favourite Pembroke Legacy, to pay $12.60.  Ranger is now in second-place in the drivers’ standings with 23 wins, just behind Campbell, who now has 24 trips to the Blue Seal Winner's Circle at Cumberland.  Aaron Hall also enjoyed two victories on the program.

Racing resumes on Friday (June 17) and Saturday (June 18).  Post time for the spring/summer meet is 4 p.m. on both Fridays and Saturdays, with the extended pari-mutuel meeting racing each weekend through July 23.

The final race on both Friday and Saturday features a 20-cent Hi-Five (Pentafecta), with a low takeout of 16 per cent.