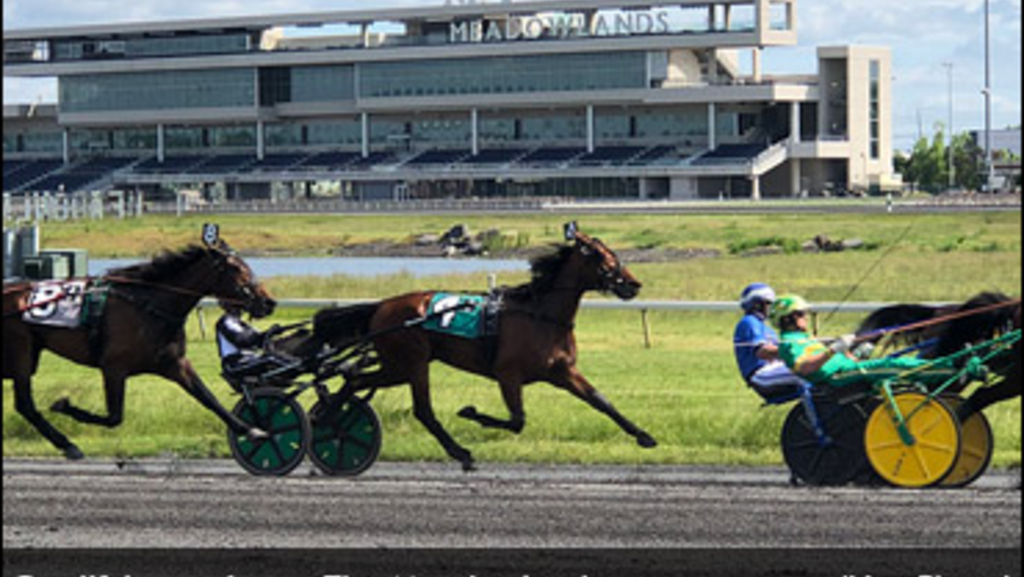 There have been a number of impressive miles already this season at The Meadowlands, and those efforts aren't just happening at night when purses are on the line. On Friday morning (June 12) the Grand Circuit-targeted sophomore trotting fillies were nearly as quick as their stakes-winning pacing counterparts.

That speed was on display in the second qualifier of the morning courtesy trotting filly Hypnotic AM. With driver Brian Sears at the lines, Hypnotic AM settled into third behind temposetter Ms Savannah Belle (Tim Tetrick) and Shishito (Dexter Dunn) through fractions of :28.2, :55.4 and 1:23.1. Shishito and Hypnotic AM then angled to the outside around that final turn and engaged the afterburners for a sprint home. Hypnotic AM had the most late kick and got up over Shishito to win by a half-length in a sizzling 1:51.1.

Trained by Marcus Melander for Courant Inc. of Delray Beach, Fl. Hypnotic AM (Chapter Seven - Daydream Am S) picked up a new lifetime mark in the process to accompany her $479,943 rookie bankroll.

The enigmatic Dont Letem was on his best behaviour this morning after a less-than-ideal older debut two weeks ago. Former trainer Jimmy Takter was at the controls behind Dont Letem this week, allowing Galixton (Pat Berry) to set the early fractions of :28.2 and :56.4 before making a move from third to the lead. Dont Letem was back on the pylons through the 1:25.1 third station and then kicked home in :27.3 to trip the timer in 1:52.4. Kings County (David Miller) was two-plus lengths in arrears with neither horse asked in the final stanza.

The stablemate to Papi Rob Hanover, Allywag Hanover could give trainer Brett Pelling a solid 1-2 punch in the glamour boy division this year. After clearing to the lead early, Allywag Hanover (David Miller) was confronted by Always On The Hunt (Mark MacDonald). Always On The Hunt cleared before a :29.1 quarter and then yielded to Captain Barbossa (Andy McCarthy) who pulled from third to take command before a :57.1 half.

Dan Patch and O'Brien Award winner Tall Dark Stranger (Yannick Gingras) was making his 2020 debut in this event, and casually watched the action from fourth as Allywag Hanover pulled from third approaching the third station, and Gingras followed that move to the outside through a 1:24.3 third panel. Allywag Hanover powered past Captain Barbossa while Gingras allowed Tall Dark Stranger to pace home unasked in the stretch. Allywag Hanover was a length better than Captain Barbossa, with the mile timed in 1:50.3.

A number of top sophomore pacing fillies were also in action on the Friday morning session, with JK First Lady emerging victorious over 2019 Breeders Crown winner Reflect With Me.

AP Emilys Dance (Scott Zeron) had the first call through fractions of :28.3 and :57 with Reflect With Me (McCarthy), JK First Lady (Gingras) and New Year (Dunn) stacked up and looming the danger behind her. Those three fillies all started to shift into the outer flow approaching the third quarter, with Reflect With Me landing on the lead through a 1:25 third panel. Gingras sent JK First Lady after the leader through the stretch and with a :25.4 final quarter she got there more than a length the best in 1:51.

Owned by breeder 3 Brothers Stables of New York, N.Y., JK First Lady (Western Ideal - JK Shesalady) picked up her second qualifying win of the season for trainer Nancy Takter. The regally-bred filly posted a summary of 5-2-2 from 11 rookie outings and banked more than $372,000.

For the full results from the Friday qualifying session at The Meadowlands, click the following link: Friday Results - Meadowlands (Qualifiers).