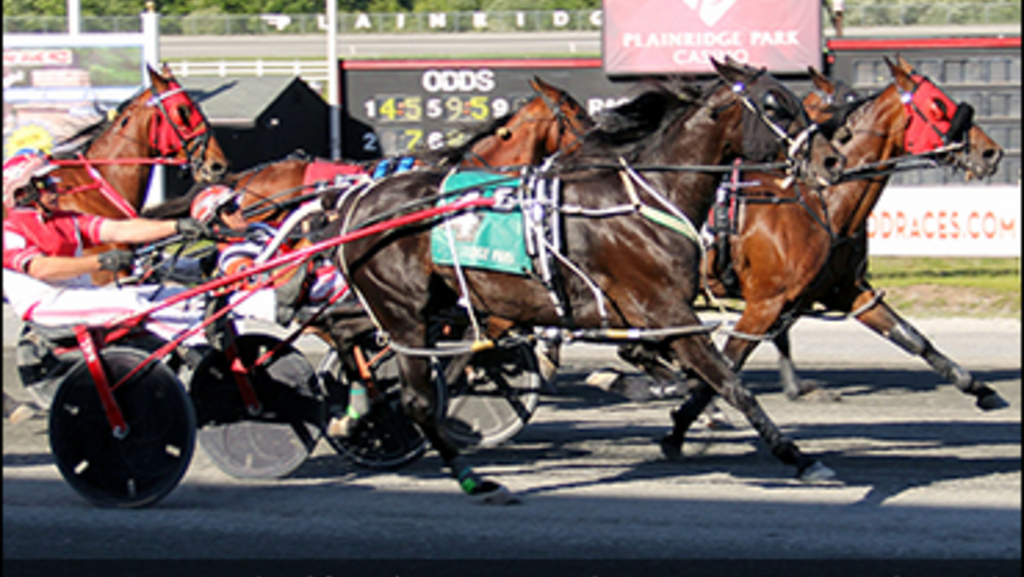 After getting beat on the front end the last two weeks, Western Stepp switched strategies and found her way back to the winner’s enclosure on Tuesday afternoon (June 12) after capturing the $14,000 Fillies and Mares Winners-Over pacing feature in a blanket finish at Plainridge Park.

Western Stepp (Drew Campbell) found herself in a familiar position at the start — that being on the front end again. But Campbell changed things up this week, allowing Show Runner (Shawn Gray) and Hidden Land (Greg Merton) to go ahead while he was content to sit third. Hidden Land then took the field to the half in :55.4. As the girls paced their way up the backside, Western Stepp pulled from the three-hole and Angel Or Terror (Eddie Davis Jr.) followed in suit from fifth, and both started the march towards the leader.

At the three-quarters, Western Stepp and Hidden Land locked up on top and were in an all-out battle for the lead. They paced side-by-side and stride for stride around the last turn when Western Stepp got a slight advantage at the head of the stretch. However, Hidden Land wasn’t done and Angel Or Terror came flying on the outside while Show Runner rallied up the pylons. But Western Stepp stood tall and held her ground to the wire, winning in 1:52.1 by a mere nose in a finish that saw only three lengths separate the entire field.

The win registered a new lifetime mark for Western Stepp ($19.40), who is owned and trained by James Dunn. It was the 21st lifetime score in only 64 lifetime starts for the five-year-old daughter of Western Maverick.

In the $12,000 distaff co-featured pace, Iced Out (Greg Merton) yielded an early lead before turning a first-over trip at the half into a neck victory in 1:54.3, but only after out-duelling No Shadows (Wally Watson) twice during the last half mile to get it done.

It was the third win of the year for Iced Out ($9.40), who is owned by Little Bapa LLC and is trained by Eric Beach.

Drew Campbell had a driving grand slam on Tuesday, while Greg Merton hit the circle three times. As a result, Campbell remains in the dash driving lead for the meet with 59 wins on the year, ahead of Merton in second with 55 wins and Shawn Gray who is third with 47 victories.