The Harringtons Win Three At Cumberland 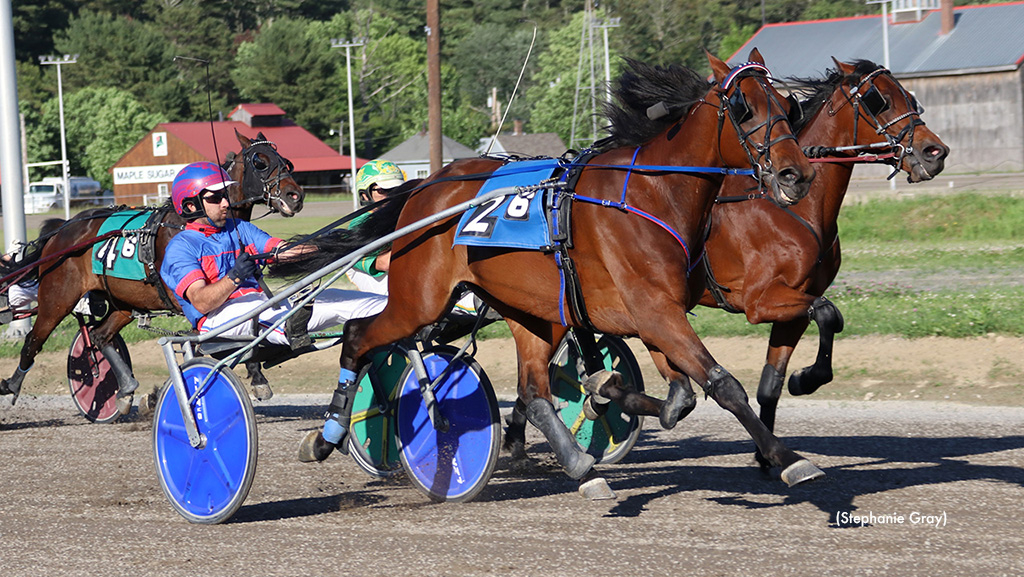 The husband and wife team of Sara and Andy Harrington enjoyed a triple play on Friday (June 10) at Cumberland, which included taking the $6,500 Open II Trot with Prescott.

With Prescott scoring from post two, driver Andy Harrington was content to concede the lead to Kyrie Deo (Mark Athearn) and Bruizn (Kevin Switzer Jr.) who tussled for the lead early, with the former finally finding the front for opening panels of :29.1 and :59.3.  While Bruizn (Kevin Switzer Jr.) sat in the two hole for the first circuit, Prescott had been third on the rail, but tipped as the field approached the stands for the second lap.

Gaining ground with every stride, Prescott fought off Bruizn at the three quarters in a swift 1:28 and had to catch Kyrie Deo who had three lengths on the field.  As the pair turned for home Prescott had one final burst of energy an caught the pacesetting Kyrie Deo to score in 1:58.1 by three parts of a length.

It was the fastest seasonal victory for the six-year-old son of Yankee Glide who is owned by Robert Gibbs.  Prescott paid $14.80 to win. Little Macabee finished third.

The Harringtons came right back to win the following race with I Saw Red.  The 11-year-old If I Can Dream Mare also lowered her seasonal mark to 1:59.1 for owner Melvin Grant.  I Saw Red paid $5.40 to win.

The Sara and Andy show continued in the finale as Pokerface scored in wire-to-wire fashion from post four.  Owned by Simon Hanson, the 10-year-old Art Major mare also lowered her seasonal mark to 1:59.3 and paid $4.80 to win.

Mike Stevenson enjoyed back-to-back trainer/driver victories.  The third race was captured by Pembroke Newt, grabbing his first victory (2:00.4) of the season, and paid $19.20 to win.  The fourth race witnessed Osprey Delta win her first start of the season, taking the $4,000 Open VI Trot in 2:04.  Osprey Delta paid $15.20 to win, having emigrated from Prince Edward Island.

Veteran reinsman Bruce Ranger had a pair of driving victories on the program.  ‘Double Digit Dave’ Ingraham lived up to his #SentItIn-moniker, stealing the fifth race with Shoot It Strait from post seven, paying $21.60 to win in 1:58.4 over favourite Justcallmeminnie.

Looking ahead, Saturday’s opener features a $5,000 ‘Sneak Peek’ stakes preview for three-year-old Maine-bred pacing fillies, the first of 10 races on the program.

Racing fans and bettors will be able to watch and wager on this Saturday’s Belmont Stakes, the 154th renewal of the final jewel of the Triple Crown from Belmont Park.

Full Belmont Stakes Day programs will be available and betting windows will be open for the first post at 11:20 am, which will be broadcast live from the NYRA at Belmont Park.  There will be TV monitors covering all the Thoroughbred action, and the Trackside Pub concession stand will also be open in the Fairgrounds grandstand.

Post time for the Spring/Summer meet is 4 p.m. on both Fridays and Saturdays, with the extended pari-mutuel meeting racing each weekend through July 23.