Update: Fire At Langley, BC Barn 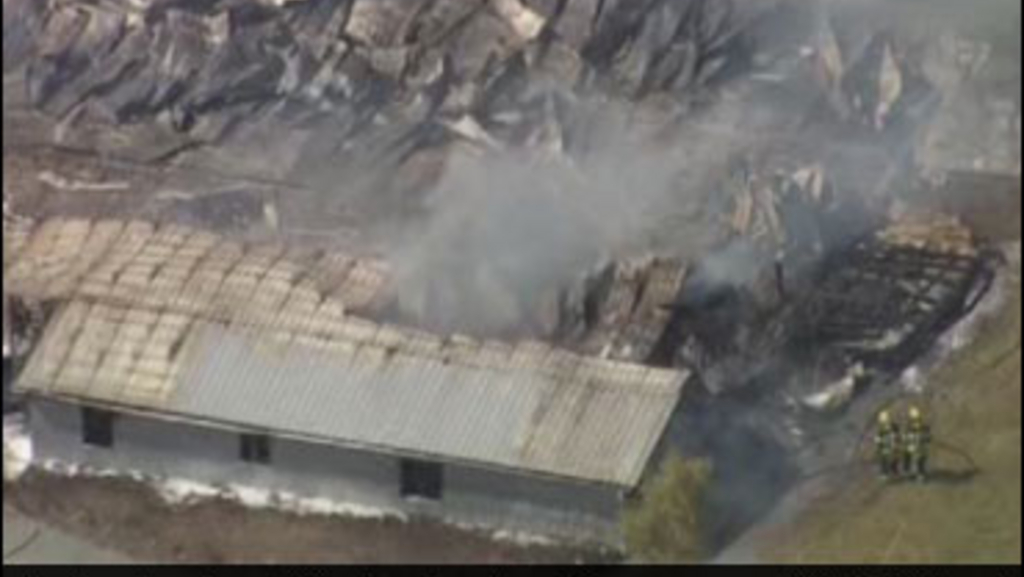 At least 20 horses perished Sunday, June 1 in a barn fire, which took place in Langley, B.C.

The reports state the barn that caught fire was located on 224th Street near 40th Avenue.

Trot Insider has learned that the majority of the horses stabled in the barn were trained by Bill Davis and owned by Rick Mowles of the J J J Stables. Investigations into the cause of the fire are currently underway. Early reports indicated that no horses made it out of the blaze.

Pat Walker, the assistant fire chief with the Township of Langley, has told the CBC that two people from an adjacent barn were treated for smoke inhalation and were later released. Walker also said that the cause of the blaze is unknown at this time.

"At this point in time, we're aware of at least 20 horses that perished in the fire, so we're in the overhaul process right now and due to the nature of the construction of the barn and the contents, we'll have to get a machine to clear the tin off and get at the animals," Walker told the CBC.

A report which appears on the website of the Vancouver Sun states that 17 Standardbreds, which were valued at up to $1 million, lost their lives in the blaze. The report also quotes Harness Racing BC Executive Director Jackson Wittup as saying that the horses were mainly two and three-year-olds. "They're all young horses so you're hoping they're the next world champion," Wittup said. "They had some great expectations of some of them." The article explains that an older pacing mare and a miniature horse were among those that lost their lives in the fire.

Township district fire chief Russ Jenkins told the Langley Advance that the fire department had to send out a second call, as more resources were needed to respond to the blaze. The report states that blaze required the help of several fire halls, 60 to 70 firefighters and five engines.

Trot Insider will provide updates on this story when more details are available.

Please join Standardbred Canada in offering condolences to the connections of the horses lost in the fire.

Our best wishes to all

Our best wishes to all affected by this tragedy.

Daryl Bier,Charles Dombeck and everyone else in the Daryl Bier stable

Our thoughts and sympathies

Our thoughts and sympathies are with all owners who lost horses in the fire. Deepest sympathy to Rick Mowles and Bill Davis. Thank-you to Harness BC for getting the fund raising going. If there is anything we can do down-under to assist your efforts let me know.
David & Debra Aldred

Auciello Stables and family send our deepest condolences to all those involved in this horrific tragedy. I know it's not enough but I would like to donate my trainers percentage from last night and tonight (thursday and friday) at Mohawk. Hoping you guys can get back on your feet as quickly as possible!

Thoughts and prayers to all

Thoughts and prayers to all involved. If there is any group that can help during life's tragedies it is the horse people.

Henry Cheng and Cloverdale Pharmasave would like to extend their condolences to Bill and all of those affected by this tragedy. We will be acting as a donation collection centre to help them get back on their feet for as long as required. Please share this with those you know in our area (5778-176A Street Surrey BC).

There are no words to

There are no words to describe the shock at hearing this terrible news. We in Alberta have appreciated the involvement of Bill Davis & family and JJJ Stables, Rick Mowles in Alberta racing for many years. I am sure everyone will contribute in any way they can.

I'm saddened for your loss...

I'm saddened for your loss... such a tragedy :(

Update on the status of

Update on the status of account for money donations is that it will be up and running later this week and the info will be brought to you as soon as can be done. Thank you . As well, the offers of equipment and supplies has been awesome reaching from all locals of racing. Anyone out east from me or here in Alberta can get stuff to myself and I'll be shipping it out to bc when all is ready to go. This was a very significant loss to the bc harness racing as jjj stable is one of if not our biggest owner/breeder in the province. Thanks again

On behalf of the Alberta

On behalf of the Alberta Standardbred Horse Association employees, Board of Directors and its members, our thoughts and prayers go out to the Davis Family and Rick Mowles. So very sad to hear of this tragic news. A huge loss for all of Western Canada.
Orianna Scheck

Now is the time that everyone

Now is the time that everyone in all forms of horse racing & people that have ever had the pleasure of befriending one of these amazing animals come together & help the Davis & Mowles families any way they can somehow come to terms with this terrible tragedy.

Condolences to all involved

Condolences to all involved this is a terrible tragedy

Just an update, I am in the

Just an update, I am in the midst of setting up a trust account for the involved parties and will post the info up just as soon as it is available. The outpouring of generosity is greatly appreciated! Thank you so much

Condolences to all involved

Condolences to all involved in this horrific tradegy

On behalf of my family and

On behalf of my family and HRBC, my deepest sympathies to Rick Mowles, the entire Davis family and others involved. A major loss for all of Standardbred racing in BC.