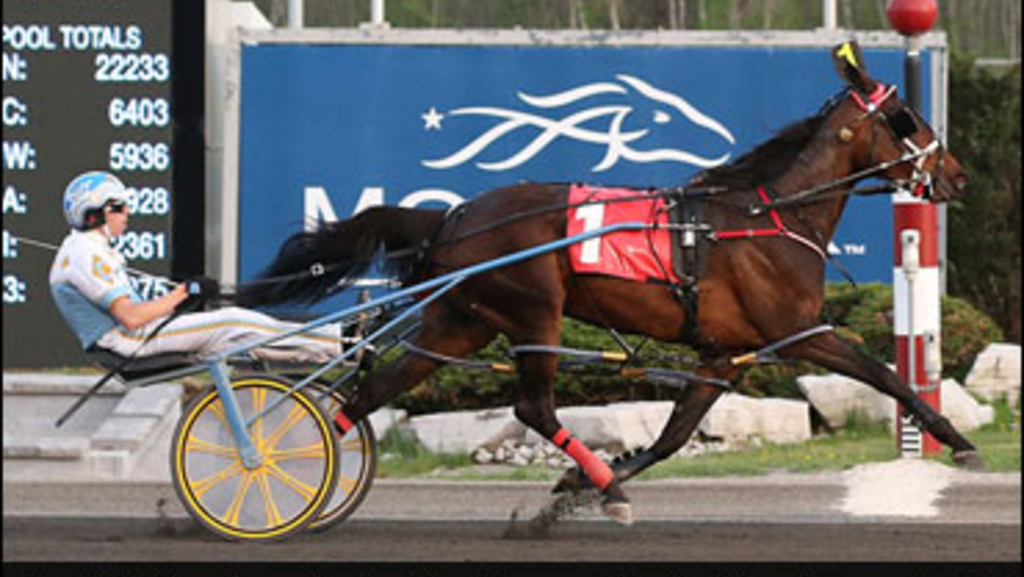 Cast No Shadow turned in a 1:50.4 stakes record performance in the $59,600 Princess championship, one of two series finals on Saturday night's harness racing card at Mohawk Racetrack.

Chris Christoforou drove the sophomore filly to victory over Moonlit Dance and the late-closing favourite, Maplelea, for trainer Nick Gallucci and owner Millard Adams of Carlisle, Ohio. The time of the mile was also a career-best for Cast No Shadow and Canadian season's record for the division.

Leaving from the outside post six, 50-1 longshot Twin B Honour (Trevor Henry) fired to the lead over Moonlit Dance (James MacDonald) and insider Cast No Shadow. Ride Away Shark (Jody Jamieson), meanwhile, had made a break in stride off the gate and even-money favourite Maplelea (Rick Zeron) was gapped at the start and settled away fifth before eventually launching her late attack.

The action heated up after the :27.2 first quarter, as Moonlit Dance overtook Twin B Honour and then Cast No Shadow swept by. The new leader reached the half in :55.2.

Maplelea began to advance with three-eighths to go, picking off rivals, while Cast No Shadow continued to lead to three-quarters in 1:23.2.

With Maplelea moving within striking distance, just two lengths off the leader turning for home, Christoforou kept his filly on task and she paced strong to the wire for the one and three-quarter length victory. Moonlit Dance fought back to finish second over Maplelea.

"I wanted to be in control coming around the last turn because I wanted to get away from Rick's mare, Maplelea; she can sprint so fast," said Christoforou after the victory. "When I heard him coming he was about two or three lengths behind me on the turn and I just pulled the trigger there and hoped that I could hold on."

The daughter of Shadow Play has earned the bulk of her $80,384 bankroll this season with six wins in eight starts. After a top-three finish in the Blossom Series Final, she joined the Princess competition in the second leg on May 1 and was second in a three-horse finish with Maplelea, the winner, and Moonlit Dance, who had taken the top spot in the opener the week prior.

"She's a real nice filly," said Christoforou. "She has lots of go to her and she's very handy, and I think that's what makes her so good. I think she's got as much speed as the other ones, but just seems to be a little bit handier than the other two [Maplelea and Moonlit Dance] lately so I think that's what makes the difference. She is definitely a Gold [Ontario Sires Stakes] filly. After that, I don't know." 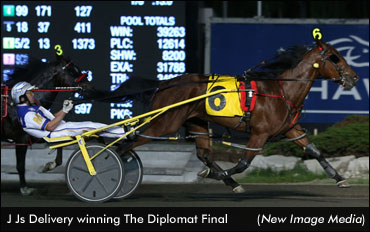 In the co-featured $60,000 final of The Diplomat Series for sophomore male pacers, J Js Delivery hauled down 4-5 favourite The Wayfaring Man off a pocket trip for a 1:50.1 career-best victory.

The gelded son of Jeremes Jet is trained by David Menary for owner/breeder Robert Hamather of Exeter, Ont.

Driver James MacDonald left from post six with J Js Delivery and fired off a :26.2 opening quarter. They had a three length lead over American Rock (Jody Jamieson) heading into the backstretch with Arque Hanover (Randy Waples) third at the pylons. Dialamara (Sylvain Filion) was parked out after sprinting off the gate from post eight and eventually backed into the four-hole.

As second leg winner The Wayfaring Man (Jack Moiseyev) began to advance first up from fifth, Dialamara made a break in stride and caused interference to the rest of the field as the trailing horses moved outside of him. Meanwhile, The Wayfaring Man worked past J Js Delivery through a :54.3 half and continued to lead the field to three-quarters in 1:22.2.

However, J Js Delivery pulled the pocket down the stretch and overtook The Wayfaring Man with a :27.2 final frame to win by one length and lower the division's 2015 Canadian record. American Rock finished third while Good Friday Three (Chris Christoforou) closed off cover for fourth. Arque Hanover was fifth.

The Wayfaring Man, Good Friday Three and Arque Hanover are all eligible to the Pepsi North America Cup.

"He's got a lot of quick speed and I just wanted to get him up close," said MacDonald of his racing strategy. "I thought if I could cut it he would be good or if I could find a good one to follow -- he's got quick speed off a helmet -- so I wanted have him involved early."

MacDonald has been nothing by impressed by J Js Delivery, who he has driven for back-to-back series wins -- the gelding won the opening round on April 25 and took the second leg off last week before tonight's final.

"He was so good in the opening leg," noted MacDonald. "I had the nine-hole and there was a lot of speed. I didn't really want to leave and I changed my mind and in just two steps he was on the front. And then it opened up late, like I only had 100 yards to the wire, and he shot through there like a bullet."

This week's $34,000 Preferred produced a 35-1 upset as Ron Adams' pacer Spinfiniti and driver Doug McNair got up in the final strides for the quarter-length victory. His career-best 1:49.1 mile was the fastest on Canadian soil this year.

The five-year-old son of No Spin Zone prevailed off a three-hole trip with a :26.4 closing kick. Pocket-sitter Evenin Of Pleasure (Sylvain Filion) came through along the pylons for second-place over State Treasurer (Chris Christoforou), who had crossed to command from post eight and turned back favourite Apprentice Hanover (Jody Jamieson) through fractions of :26.3, :54.3 and 1:21.3.

The victory was Spinfiniti's first at the Preferred level and sixth in 15 starts this year. Lifetime, he has won 15 races and $155,640 in purses.