Forbidden Trade Back On Track 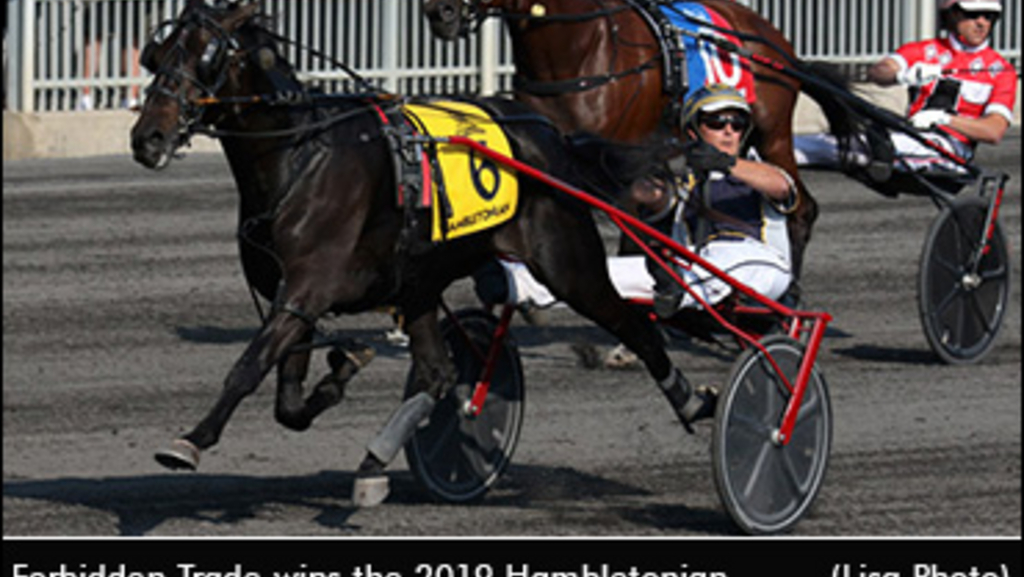 While he showed his usual talent, there was something different about 2019 Horse of the Year Forbidden Trade in his Saturday morning qualifying effort at The Meadowlands.

During an 11-dash card of qualifiers at The Big M, one qualifying event definitely contained the most star power despite being reduced to a three-horse field. The group of older trotters included 2019 Hambletonian winner and Canada's Horse of the Year Forbidden Trade, 2020 Hambletonian winner and U.S. Three-Year-Old Trotting Filly of the Year Ramona Hill, and multiple world record holder and two-time divisional champion stateside Amigo Volo.

All three of these horses were qualifying for the second time in 2021, with all three finishing back of When Dovescry in a 1:56.4 qualifier last Friday.

Forbidden Trade came into the Saturday morning test wearing trotting hopples, something the five-year-old hasn't worn with regularity since his sophomore season. The old equipment didn't hinder his abilities.

Driver Bob McClure pointed Forbidden Trade to the front and he trotted through tepid panels of :28.4, :58.4 and 1:28 with Amigo Volo (Dexter Dunn) and Ramona Hill (Andy McCarthy) following tightly behind. The field picked up the tempo in the stretch, with Amigo Volo popping the pocket to pressure the leader and close the gap. Forbidden Trade held sway, winning by a long neck in 1:54.4. Ramona Hill finished an unhurried third, closing in :26.4 some two lengths back of the winner.

Marcus Melander sent out a pair of colts that will look to challenge for the 2021 Hambletonian -- Dancinginthedark M and In Range -- and each colt emerged victorious from 1:54.2 qualifiers courtesy driver Tim Tetrick. Dancinginthedark M sat the pocket behind Broadway Don (David Miller) in his morning test before finding room in the stretch for a half-length victory.

A three-time winner at two, Dancinginthedark M (Readly Express - Leila) is owned by his breeder, Menhammar Stuteri of Paris, Ky.

In Range did all the work in his qualifier, confidently striding to a wire-to-wire score to win by two length over an under-wraps 2020 O'Brien Award winner On A Streak (McClure).

Fellow Melander trainee Iteration -- the full-sister to 2020 U.S. Trotter of the Year Gimpanzee -- was successful in her seasonal debut after a gate-to-wire 1:57.2 performance with regular driver Brian Sears up for owner Courant Inc., but her performance was overshadowed by divisional rival Avenir. The temperamental daughter of Muscle Hill - Chic Chick was on her best behaviour on Saturday morning, trotting in a lifetime best 1:54.1 -- the fastest trotting mile of the morning -- for driver Yannick Gingras, trainer Ron Burke and his co-owners Knox Services Inc. of Mt Vernon, Oh., Jandt Silva Purnel & Libby of Delray Beach, Fl and Weaver Bruscemi LLC of Canonsburg, Penn.