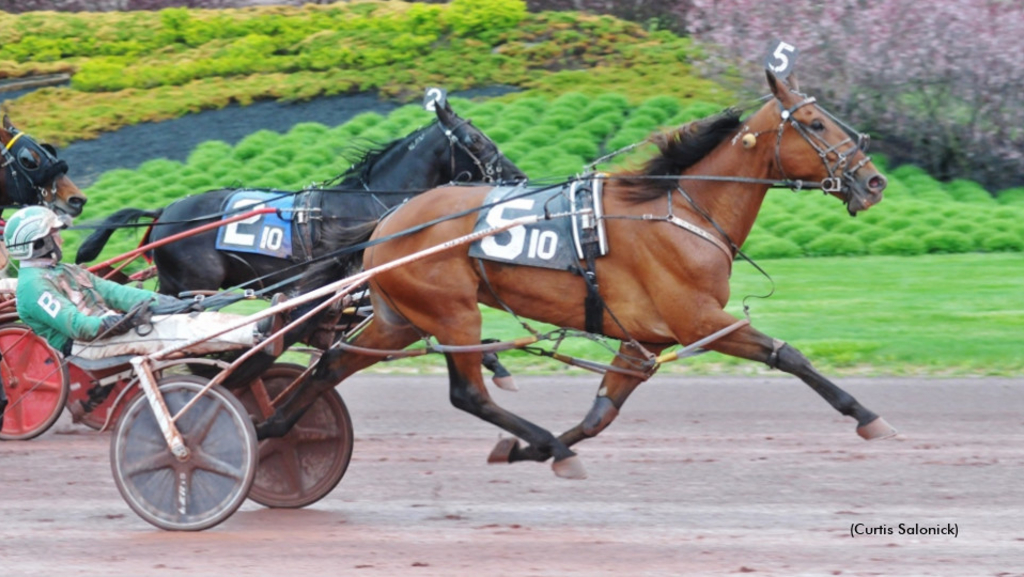 The Downs at Mohegan Sun Pocono hosted a pair of $17,500 fast-class events on Saturday (May 7), one on each gait, over a sloppy track in mid-40s temperatures on Kentucky Derby Day, with Rebellious closing to take the pacing contest and Scirocco Rob game to win a photo in the trot.

Rebellious, despite good recent form, probably was let go by the crowd at 7-1 because Florida shippers traditionally need a start to adjust to northern climes (like the one at Pocono today). But the oft-winning altered son of Mach Three (now 59-for-159 lifetime) showed he was ready right away. Braxten Boyd raced him in the cover flow off a very contentious pace (:27, :56.1, 1:24.2), then got him to the wire in 1:52.2, 1 1/4 lengths ahead of a groundsaving War N Munn, to raise his earnings to $469,528. Trainer Mike Deters co-owns the successful campaigner with Joel Warner.

Scirocco Rob and driver Mark MacDonald left little doubt as to their intentions early in their contest, going :27.4 in the nasty conditions to put everybody in behind, then getting a breather to the half in :58.2. Judge Bob came up with a determined first-over bid to and past a 1:26.2 three-quarters, and just when the leader was able to open a small bit of distance over that one, up the Pocono Pike came Mystical Wynn. But Scirocco Rob still had a :28.1 last quarter in him to defeat the pocket-sitter by a head in the 1:54.2 mile, with the Explosive Matter gelding now a winner of $641,771 for trainer Mark Silva and owner Kathleen Whitaker.

There were 11 claims during the card totaling up to $292,250, with both Go West Go Fast (for the second straight week) and Western Tyrant tying the track record of $40,000 for acquiring a horse via the claiming box. In the first three months of the year at Pocono, there have been 229 claims for $4,460,775.

The Pennsylvania All-Star Series makes its first 2022 appearance during Sunday’s 5:00 p.m. twilight card. The two $35,000 divisions of the three-year-old pacing filly event features the likes of Treacherous Dragon, second to champion filly Niki Hill and a recent winner over that one in a qualifying race, and Silent Crossing, winner of five straight including a sweep of her section of the Weiss Pacing Series here. Program pages are available on the PHHA website.