With Out A Doubt Fastest In NYSS 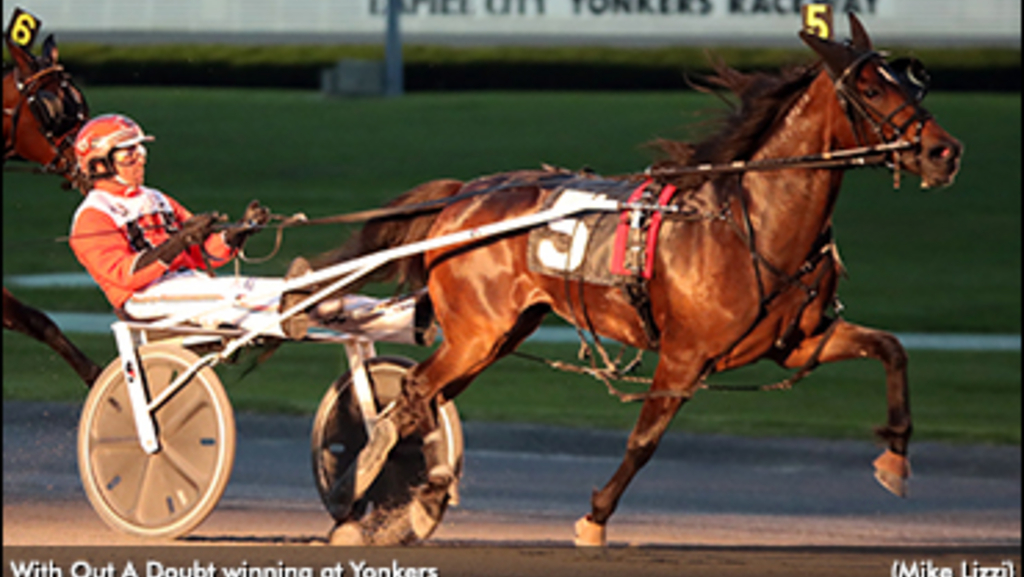 The lasses competed in three divisions. Two six-horse fields offered $54,833 apiece, but it was the $53,833 five-horse event that saw With Out A Doubt produce the fastest winning mile.

The first of two happy half-dozen sire stakes events was won by With Out A Doubt. Making the first lead from post five, she soon gave it up to Sensibility, who worked through intervals of :28.2, :58.3 and 1:27 with minimal annoyance from Thanks For Leaving and even less from 17-10 favourite Conway Kellyanne.

Sensibility owned a length-and-a-quarter lead into the lane, but With Out A Doubt edged by with purpose. She drew out, winning by a length and three-quarters in a life-best 1:56.2. Sensibility was a safe second, with Conway Kellyanne and Thanks for Leaving completing the gimmicks.

The opening quintet saw Hanna Dreamgirl (Brian Sears, $13) waltz around the oval as the only leaver. From post-position three, she never had any grief through fractions of :29.3, 1:00.1 and 1:29.3, disposing of first-up, 2-5 choice Stella Jane, then held pocket-sitting Sweet Chapter at bay. The final margin was three-quarters of a length in the 1:59 mile with Stella Jane settling for the bottom of the ticket.

For third-choice Hanna Dreamgirl, a daughter of Chapter Seven owned by Ken Jacobs and trained by George Ducharme, it was her seasonal debut (2-for-15, $115,204 as two-year-old). Brian Sears drove the $13.00 winner. The exacta paid $29.20, with neither triple nor superfecta wagering offered.

Pilgrim Lass, one of three that didn’t gallop early, led the remaining trio through splits of :30.3, 1:01.1 and 1:30.2. Winndevie, pocketed from post five, took out early but found the leader quite stubborn. Winndevie did get past very late, with Amal Hall third. Quincy Blue Chip, the 7-10 choice, did beat the other breakers.

For second-choice Winndevie, a Credit Winner miss trained by driver Trond Smedshammer for owner Purple Haze Stables, she began her sophomore season after going 6-for-7 ($227,878) as a frosh. She paid $4.60 to win. The exacta paid $102, the triple returned $286 and the superfecta paid $771.

(with files from Yonkers Raceway)