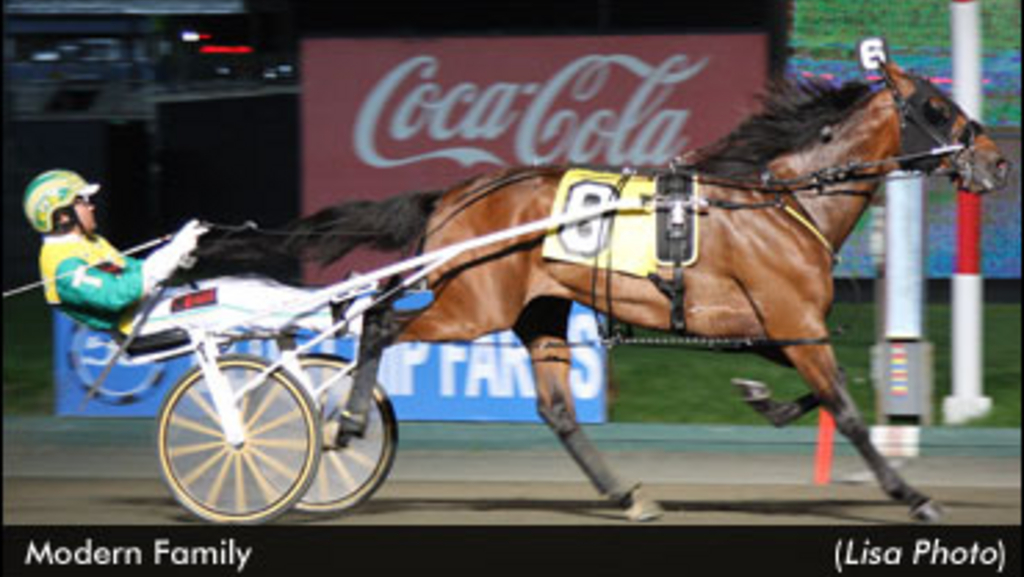 Modern Family bested a full field of talented four-year-old trotters winning the inaugeral edition of the $100,000 Meadowlands Maturity in a new lifetime mark of 1:51.4 on Saturday night at Meadowlands Racetrack.

Uncle Peter worked his way to the lead off the gate from post eight over Modern Family into a :28.2 first quarter, but the parked out 82-1 longshot, Solvato (Trond Smedshammer), rolled on to take the top spot into the backstretch with Magic Tonight (John Campbell) hot on his heels.

Magic Tonight swept to command before the :56 half-mile mark and proceeded to three-quarters in 1:24.2 with Uncle Peter angling off the pylons and Modern Family following his cover in a four-horse breakaway on top. Uncle Peter wore down Magic Tonight in the stretch, but Modern Family came charging up on the outside with :26.4 final quarter speed to steal the glory. Guccio rallied from third over to edge out Solvato in a photo for show.

"He's real honest, he always shows up to work and had good gait speed," said Tetrick of the winning trotter. "We got a little lucky with the trip. I was happy in the first turn when I saw Dave leave out of there -- I thought I was going to get a nice trip. Then Trond came and that kind of surprised me. John went and then I had to wait for Dave to come, but it worked out well."

Tetrick noted that this year the older trotting class looks to be a competitive bunch.

"There are a few more still to come out -- Market Share hasn't even risen yet," he noted. "It's a good class of older trotters."

Fresh off a pair of Preferred wins at Pocono Downs, Modern Family paid $8.20 to win.

Bier co-owns the son of Cantab Hall with Charles Dombeck and Richard Poillucci. Modern Family now boasts eight wins and two seconds in 11 seasonal starts with $134,250 earned in purses. Lifetime, he's 12-for-31 and sports a bankroll of more than $200,000.

Four-year-old pacers were also in the spotlight during Saturday's card in a $25,000 divisional Open with Hurrikane Kingcole taking top honours for driver Dan Dube and trainer John McDermott.

Sent postward as the odds-on favourite, the season-debuting son of Cams Card Shark ralled home from the backfield in :26.2 to prevail by two and three-quarter lengths in 1:50 flat. Ideal Champ (David Miller) and Lindwood Player (Andy Miller) also used :26 and change final frames to hit the board.

The career winner of more than half a million dollars is owned by Kuhen Racing LLC, John Levy Racing Stable, Klee Cohen Brewer And Gor, and Hurrikane Racing LLC.

The Meadowlands Maturity Pace is scheduled for Saturday, May 18.

Earlier on the card, North America Cup eligible Johny Rock made his sophomore debut a winning one in the $39,615 John Simpson Memorial.

Driven by Andy Miller, the son of Rocknroll Hanover swept around his co-favoured entrymate and eventual breaker, Duel In The Sun (Corey Callahan), after the opening quarter. He then fought off first over attacker Kenzies Beach Boy (Ron Pierce) down the backside and cruised home to win in 1:51.1, matching his lifetime mark set in last year's New Jersey Sires Stakes Championship. The John Butenschoen trainee prevailed by two and a half lengths over Rocnrolwilneverdie (John Campbell) and Real Rocker (Yannick Gingras), paying $2.60 to win.