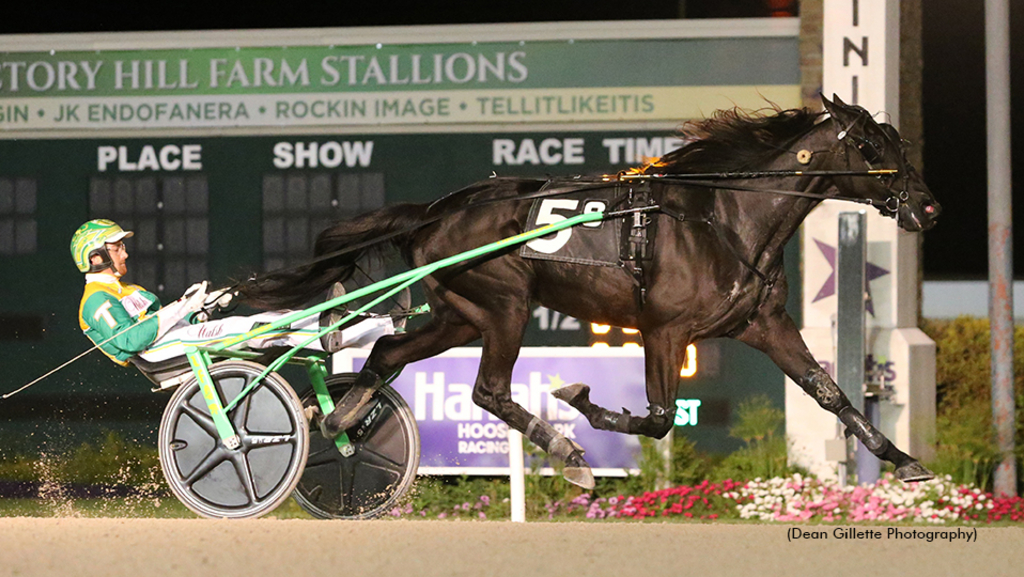 Harrah’s Hoosier Park Racing & Casino played host to a stakes-filled card on Monday, May 30 that featured 10 divisions of Indiana Sires Stakes for the three-year-old competitors.

It marked the start of the 2022 stakes season and also a successful evening for Harrah’s Hoosier Park’s leading driver Trace Tetrick, who won six of the 13 races while teaming up with trainer Erv Miller for four. Tetrick kicked things off with a victory in the first race on the program but his first Indiana Sires Stakes win wouldn’t come until the ninth race. He ended the night with a total of four stakes victories.

The three-year-old trotting fillies were the first to square off and it was Bluebird Dove and driver Peter Wrenn who came out on top in the $47,000 opening division. Bluebird Dove sat the pocket on the heavily favoured Luv Lorelei and Robert Taylor before getting up in the final strides of the mile for the win. The 1:53.2 score bested her lifetime mark by nearly three seconds. The daughter of Swan For All-Goosebump Hanover is trained by Melanie Wrenn and owned by David McDuffee and L&L Devisser LLC.

Wrenn had a driving double on the program as he also scored in the very next stakes, the first division of $34,500 Indiana Sires Stakes for three-year-old pacing fillies, with Alloutblitz for trainer Jeff Cullipher. Once again, it was a late stretch showdown between favourites. After grinding the mile first-up, Alloutblitz valiantly fended off Marvelous Marshia and John De Long to score in a lifetime-best 1:51:4. The JK Endofanera filly picked up her first win in three tries on the season and pushed her career bankroll to $109,334 for owners Pollack Racing and Cullipher.

Cullipher had a training double on the program as he also sent out Always Gonna B You, who was victorious in her split of the stakes for three-year-old pacing fillies in 1:49.4. With driver John DeLong in the bike, Always Gonna B You converted a pocket trip into a new lifetime best score. Owned in partnership by Roll The Dice Stable and the Val D’Or Farms, the daughter of Always A Virgin-Passing Fancy scored her second win of the season and fifth lifetime victory.

The final stakes division for the three-year-old pacing fillies went to Trick Of The Light and Trace Tetrick. Trick Of The Light went gate-to-wire and held off JKs Rollin Baby with Atlee Bender to win in a career-best 1:50.3. Trained by Brian Brown, the daughter of Odds On Equuleus-Gordjus has now won two of three seasonal starts.

Tetrick and trainer Erv Miller teamed up to record two victories in stakes action. The Longest Yard made his seasonal debut a winning one after he stopped the timer in 1:50.2 in a split for three-year-old pacing colts. The gelded son of Rockin Image-Balinska Hanover used a :26.2 closing quarter to hold off Fulfillnmydestiny and driver/trainer James Yoder. With the victory, The Longest Yard established a new lifetime best and recorded his fourth lifetime win for owners Rocco Ruffolo and Douglas Overhiser.

Ponda Adventure also made his seasonal debut a winning one for Tetrick and Miller as he looked every bit the part of a 3-5 favourite. The Swan For All-Wildflower gelding went gate-to-wire to score in a new lifetime best of 1:53.3, winning by nearly three lengths over Flat Out Foxy and Sam Widger. Ponda Adventure is owned in partnership by Engel Stable of IL LLC, Jerry Graham and Louis Willinger.

The 2021 Indiana Sires Stakes two-year-old trotting colt champion Dover In Motion was victorious in the opening division for three-year-old trotting colts. Also using a gate-to-wire trip, Dover In Motion was in a race of his own as he stopped the timer in a new lifetime best of 1:52.4 and won by nearly six lengths. Driven by Ricky Macomber Jr. and trained by Jamie Macomber, the son of Dover Dan-Keystone Sadie has now won nine of 10 lifetime starts.

The 2021 Indiana Sires Stakes two-year-old trotting filly champion, M Ms Dream, also opened her three-year-old season in impressive fashion with a victory of her own. With regular pilot Sam Widger in the bike, M Ms Dream used a :27 closing quarter to track down Swan Trixie and Peter Wrenn late in the lane. Trained by Henry Graber Jr., the daughter of Swan For All-Trading Places stopped the timer in 1:54.4 to establish a new lifetime best.

Ponda Warrior established a new lifetime best of his own after a 1:49.1 front end score in the opening division for three-year-old pacing colts and geldings. Driven by Jimmy Whittemore for trainer Jay Hochstetler, the son of Rockin Image-Sweetnsinful went to the front and never looked back en route to his second consecutive victory this season. Ponda Warrior is owned in partnership by Jay Hochstetler, Finkelberg Racing and South of the Tracks Rac I.