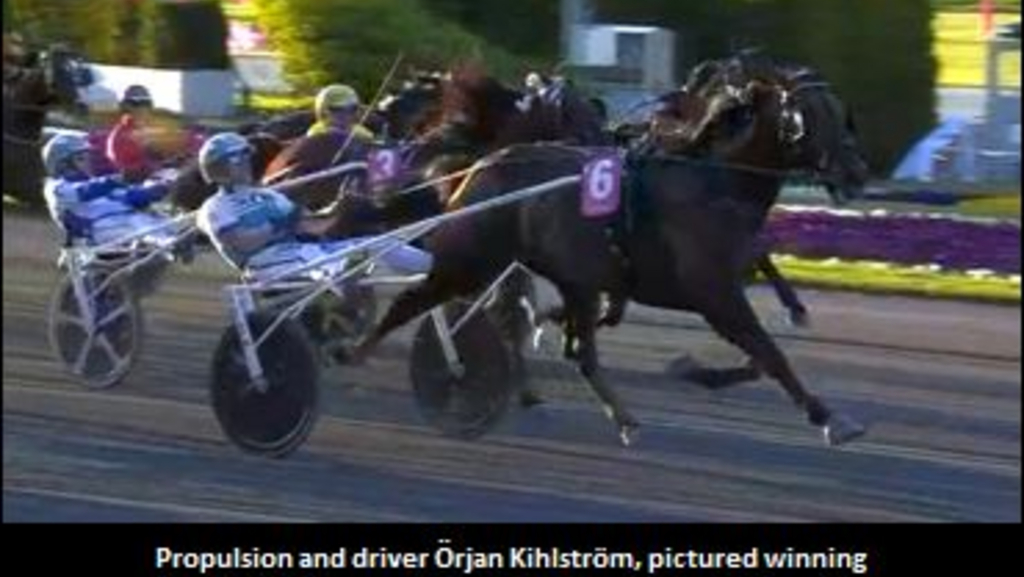 Spectators may not have been in attendance at Sweden's Solvalla race track on Sunday, May 31, but harness racing fans that watched the 2020 Elitloppet remotely from all over the world were provided with a treat.

Although he didn't win his elimination heat earlier in the day, the American-bred Propulsion had impressed while in defeat. He had raced three-wide throughout his elim and had gutted it out in the lane to advance to the final.

Eight of the world's top trotters laid it on the line in the final, and Propulsion, who had started from Post 6, was third-last when the field swung for home. That is when driver Örjan Kihlström unleashed Propulsion, and the heralded son of Muscle Hill responded.

Horses made spirited bids in the lane, but it was Propulsion, who was flying five- or six-wide on the outside, who swooped up and chugged past his rivals for an impressive win -- possibly the last of his career.

RECAP OF THE ELIMINATION HEATS

Post positions for the final of the 2020 Elitloppet have been drawn, as a pair of elimination heats for the prestigious international trotting event took place earlier today (Sunday, May 31). This year's event at Sweden's Solvalla race track is taking place without fans in attendance due to the COVID-19 pandemic.

Earl Simon sat in a gapped second-over slot for much of the contest. The Johan Untersteiner-driven Missle Hill had grabbed the lead early and was on the point until being overtaken by Earl Simon late in the stretch. Ouvrie fanned wide off of the turn and gave Earl Simon a clear path to victory. Earl Simon was well within himself in victory.

Missle Hill held on for second. The Per Linderoth-driven Sorbet sat a pocket trip into the stretch and edged forward late to snare third. The Fredrik Larsson-driven Milliondollarrhyme rallied wide from the back of the pack and was right up in the mix for a fourth-place finish.

The top four finishers from the first heat (Earl Simon, Missle Hill, Sorbet, Milliondollarrhyme) have advanced to the final.

The second heat was next up in Race 7, and it was the Christoffer Eriksson-driven Cokstile that raced first up for the large majority of the mile before hitting the wire first. Racing Mange (who was driven by Joakim Lövgren) trotted a tactical two-hole trip and came on late to finish a fresh second.

Although Cokstile captured the second heat with a sustained first-up effort, it was the Örjan Kihlström-driven Propulsion that had the harness racing world talking after the tilt.

Propulsion raced three-wide for the duration of the second heat and was still slugging it out in the stretch. Propulsion finished third, while the Erik Adielsson-driven Attraversiamo closed wide for the wire, but had to settle for fourth.

The top four finishers from the second heat (Cokstile, Racing Mange, Propulsion, Attraversiamo) have advanced to the final.

The draw for the final of the 2020 Elitloppet took place after the dust had settled. The draw results appear below.