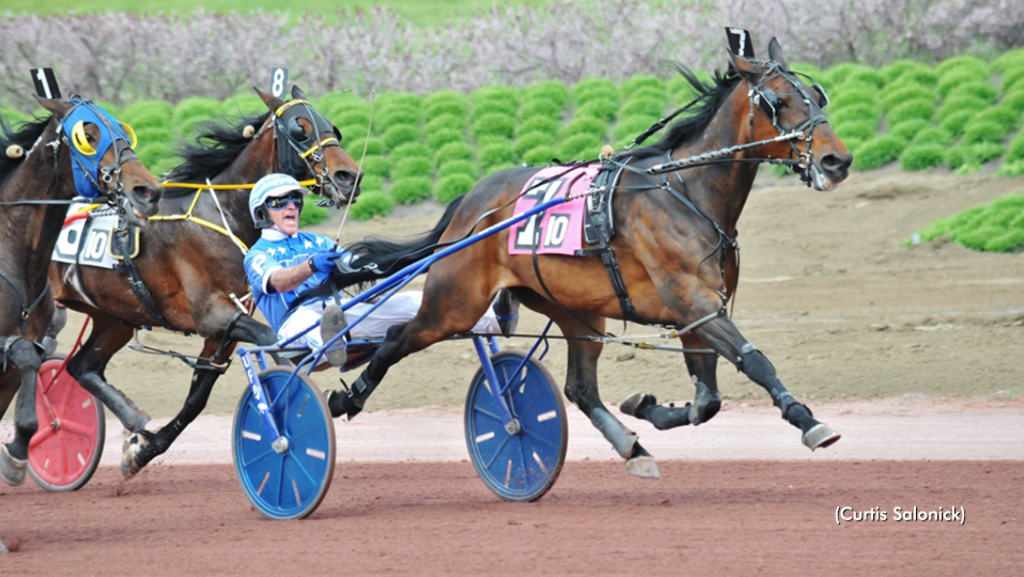 The veteran Kadabra gelding Buzz, a confirmed front-stepping trotter, took a little longer than usual to get the lead in the $12,500 feature on Tuesday (May 3) at The Downs at Mohegan Sun Pocono. But once he did get the front he proved uncatchable, holding off the favourite Bank Box Treasure by a neck in 1:55.1.

Regular driver Jim Pantaleano had to settle for a three-tuck early with Buzz as BCs Rose and Miss Muscle argued to a :27.1 quarter, but the speed-favouring winner of $426,424 was on the move in front of the stands and got the top before a :57 half. Bank Box Treasure came up first over to test Buzz much of the last half, but past the 1:25.2 three-quarters and through the lane Buzz was able to hold off the chalk.

Buzz, who now has three wins and three seconds in six starts since coming to Pocono in mid-March, was claimed out of his last start by trainer Joe Skowyra and owner Rocco Stebbins. And they retained the horse when no one went for the $20,000 optional claiming tag under which Buzz was entered here.

Tyler Buter and George Napolitano Jr. each drove three winners on the Tuesday card; two of Buter’s came from the in-form barn of trainer John Butenschoen.

Racing resumes on Saturday at Pocono, with the 1:30 p.m. card featuring a $17,500 fast-class feature for each gait. Sunday’s 5:00 p.m. program will be highlighted by the first Pennsylvania All-Stars action of 2022, with two divisions of three-year-old pacing fillies each going for $35,000. Leading the sophomores will be Treacherous Dragon, a top filly from last year who prepped for her seasonal bow by defeating last year’s divisional champion Niki Hill in a qualifier at The Meadowlands. Program pages will be available on the PHHA website.