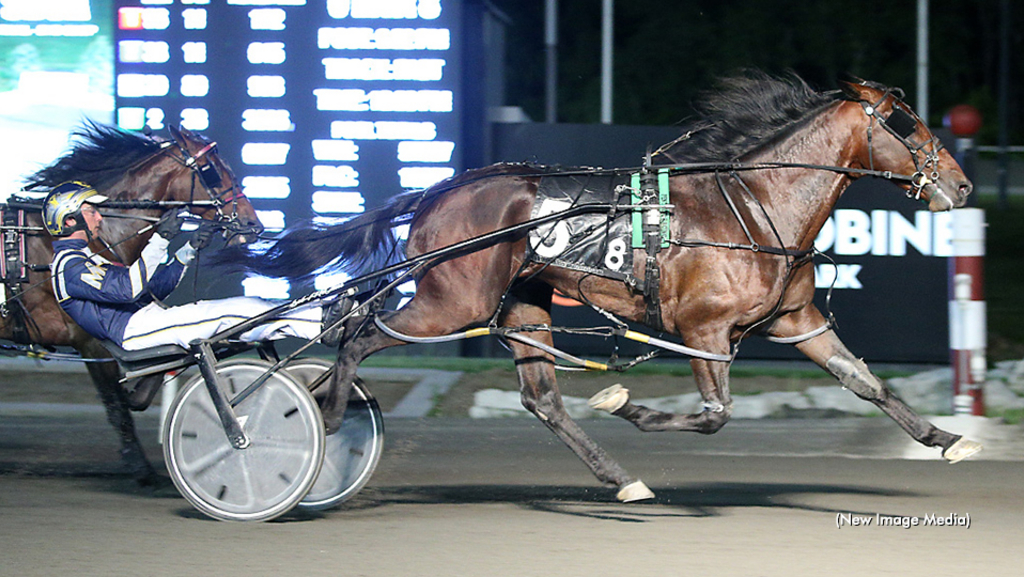 A field of nine Ontario sired sophomore pacing colts and geldings finally clashed in Saturday’s marquee race, one week after it was postponed due to a power outage.

Macho Phil did the heavy lifting through the opening three-quarters of the mile, blasting to the lead for driver Travis Cullen to post fractions of :26, :54.4 and 1:22.4. The snapshot at the three-quarter pole saw Macho Phil hold a two-length lead over Bob Loblaw in second and a first-over Chucky Hanover in third.

Stonebridge Helios got away seventh and sat third over turning for home with driver Bob McClure calmly at the controls.

In the stretch, Stonebridge Helios was shown open racetrack and powered by his rivals to win by just over a length in a career-best 1:50.3. Sport Secret, who got a second-over trip, finished second, while Chucky Hanover was third. Magical Arthur and Bob Loblaw completed the top five.

After winning his elimination on the front, Stonebridge Helios got a completely different trip in Saturday’s final.

“It worked out really good,” said driver McClure. “They went big fractions and he loves to mow down fast fractions, so we got lucky that way.”

Trained by John Pentland, Stonebridge Helios is now two for two in his three-year-old campaign after posting four wins and nearly $300,000 in earnings during a seven-start rookie season.

“I don’t know how much he’s improved, he just grew like everybody else’s colt,” said Pentland. “He was a big strong colt last year and a good colt last year and I was lucky he doesn’t have a lot of problems and he loves to race, that’s the main thing about him.”

With eyes on the Pepsi North America Cup, Pentland noted that he is undecided on whether he will enter Stonebridge Helios in next Saturday’s Somebeachsomewhere Stakes.

The SBOA Stakes victory boosts ‘Helios’ up to six wins and $369,510 earned for owners John Fleischman, Angie Stiller and Pentland.

Stonebridge Helios victory as the favourite in Race 8 was squeezed between victories by Lux Seelster (15-1), Twin B Heart Throb (23-1), Highlandbeachsbest (17-1) and Hervey Hanover (15-1).