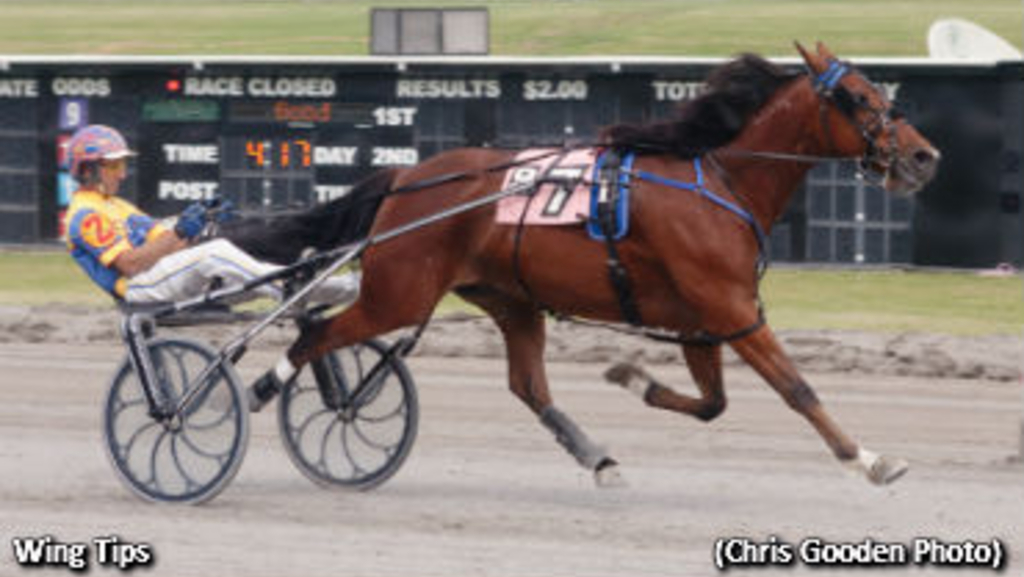 Regrouping from a last-place effort marred by a break, Wing Tips soared to the front Tuesday at the Meadows to capture a division of a Pennsylvania Stallion Series event and establish stakes and national season’s records

The stake for three-year-old colt and gelding trotters was conducted over six divisions, with Bob And Bobby, Fogelberg, Avenue Of Dreams, Trustworthy Kid and Baron Nishi taking the other $20,000 splits. Brian Zendt enjoyed a stake driving double with Wing Tips and Trustworthy Kid.

Wing Tips broke his maiden May 7 but followed that up with his off-stride performance. In the stake, however, he took advantage of a drying track, blazing to the lead and scoring easily in 1:54.3, fastest this year by a sophomore gelding on a five-eighths-mile track. It lowered the stake record of 1:55.1 set one race earlier by Bob And Bobby. Beluga Ridge was second, 2-3/4 lengths back, with White Russian third.

“That was very exciting,” said Leslie Zendt, who trains the son of SJs Caviar-Annette Hall — a $15,000 yearling purchase who was unraced at two — and owns with Bill Zendt. “After the break last start, I was just hoping to get around there in one piece and do something positive. That was pretty impressive for him to do that on the front end. We’ll probably stay in the stallion series with him and try to make a nice aged horse out of him.”

Although Bob And Bobby’s record was short-lived, he raced gamely, wearing down Fashion Astral late by a nose to take more than three seconds off his lifetime best. Amplify completed the ticket. Aaron Merriman drove the Andover Hall-Armbro Prowess gelding for owner Susan Daugherty and trainer William Daugherty, Jr., who earlier had grown so frustrated trying to keep Bob And Bobby trotting that he turned around the gelding’s shoes.

“I’m still tinkering,” he said. “I got his head up a little bit, and I took the inserts out of his hood and ears. I spread the toe a little bit more and added toe weights. But I can hardly be unhappy with what he did today.”

Fogelberg was not named for singer Dan Fogelberg, but he was the leader of the band Tuesday, trotting past his previous gaiting and greenness problems to notch a front-end victory in 1:55.4 for driver Tony Hall, trainer Todd Rooney and owners Foge McKeever LLC, Eldon Thompson and Joseph Hartley. Can Do was second, three lengths in arrears, while Manolo B was placed up to third.

“He’s given me ulcers,” said Rooney of the son of SJs Caviar-Maurel Hanover. “I know he’s a really fast horse. He’s just been making mistakes, and he’s a little immature. I knew if he ever got it together, he’d have a lot of trot. Hopefully we’re over the hump. He’s eligible for the Currier & Ives next week.”

The $22,500 Preferred Handicap Trot was contested just after a heavy storm rendered the track sloppy. No Doze had no trouble with the off going, using two moves for Dave Palone en route to victory in 1:56.1 over Rembrandt Spur and TSM Photo Bugger. Miles Wollam trains No Doze, a six-year-old Striking Sahbra-Annandale gelding who vaulted over $200,000 in career earnings, and owns with Patricia Wollam and Renna Wollam.

Wednesday’s card at The Meadows features three divisions of the Super Bowl, a $274,510 PA Sires Stake for three-year-old colt and gelding trotters. Uncle Peter, the 2011 Breeders Crown winner, and Stormin Normand, last year’s Pennsylvania champion, are set to square off in the third split, which goes as Race 6. First post is 12:55 p.m.