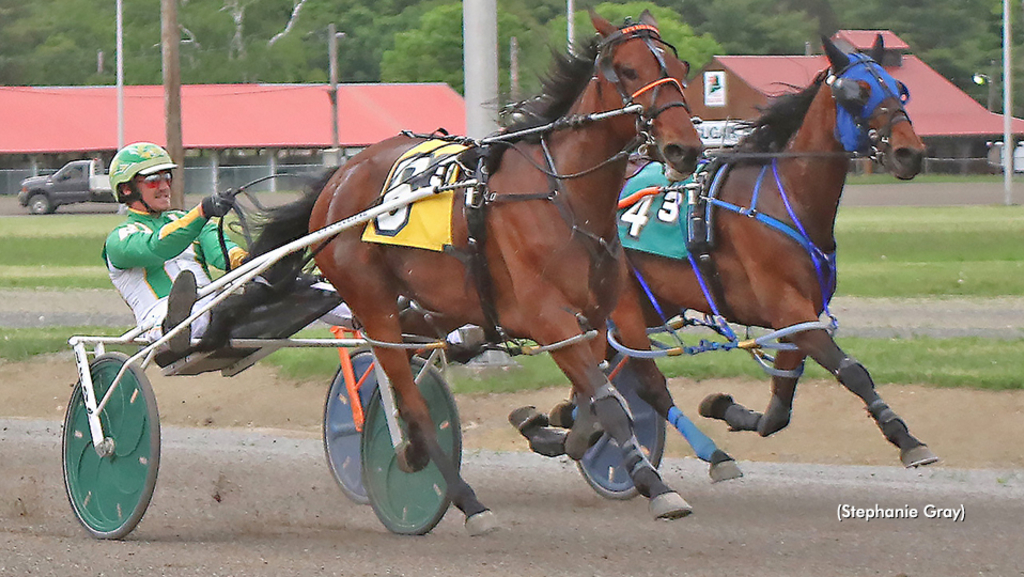 Leaving from post 6 in a seven-horse field, Matty “Ice” hustled the five-year-old daughter of Sunshine Beach ahead of the pack, only to be met with immediate resistance on the inside from Go Sandy Go.

The two mares opened seven-plus lengths on the field as they paced up the backside into a swift :27.1 opening panel. As the field passed the stands for the first time, the ladies continued to gain separation from the rest of the contenders as the leaders hit the half in :56.2. Out of the paddock turn, Athearn sensed an opportunity to challenge the tempo-setting Go Sandy Go, and as the pair reached the three-quarters in a grueling 1:25.1, Rys Red Rocket was given her cue and moved up alongside the frontstepper.

The pair paced in tandem around the final turn and down the home stretch. Within a stone’s throw from the wire, the victor managed to gain an advantage in the hard-fought battle for bragging rights.

Tripping the timer in 1:54.2, Rys Red Rocket got her second win in three outings for owner-trainer Donnie Richards. Go Sandy Go hung on by a length to be an ultra-game second, with Terror Hall back 7-3/4 lengths for third. Rys Red Rocket paid $7.20 to win.

Rocksapatriot won in the 100th start of his career, grabbing his 21st victory in the $5,500 Open III Pace for veteran reinsman Dave Ingraham.

Quick Fun N left swiftly from post 6 to gain a tactical advantage, but was forced to swing wide through the turn before assuming command in a :28 opening panel. Mosher got the breather he wanted in the form of a :58.3 half while the outer flow started to develop.

The first to move was Jet Aviation who was immediately followed by Rocksapatriot as the field pushed into the paddock turn. Pacing to three-quarters in 1:26.4, Dan Deslandes could wait no longer and moved Nagel three-wide alongside Rocksapatriot as the pacesetting Quick Fun N started to fade.

As the field rounded the final turn, the three leaders matched strides and from the pylons out neither Jet Aviation, nor Rocksapatriot or Nagle gave an inch. When the group straightened for the stretch drive, Ingraham jiggled the lines at Rocksapatriot and the classy campaigner responded by stepping away from the troika by two lengths to win in 1:55.4. 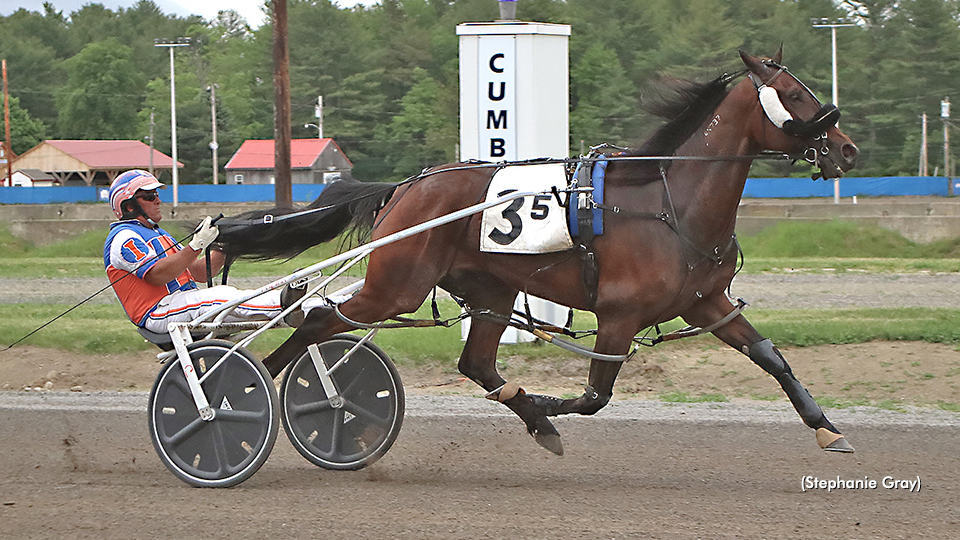 Kevin Switzer and Drew Campbell both enjoyed driving doubles on the 10-race program.  When the dust settled, Campbell’s deuce put him into a tie with Matt Athearn for first place in the drivers’ standings with 19 seasonal Cumberland victories. Dan Deslandes is third with 18 victories, Kevin Switzer is fourth with 17 and Bruce Ranger rounds out the top five with 16.

Racing resumes Friday (June 3) at 4 p.m. (EDT), and continues on Saturday (June 4) with the extended pari-mutuel meeting active each weekend through July 23.

First Tracks Cumberland is also pleased to present, in concert with the Maine Harness Horsemen’s Association, a stakes preview for three-year-old pacing Maine-breds. Featuring a ‘Colt Carnival’ for colts and geldings on Saturday, June 4 and a ‘Filly Festival’ on Saturday, June 11, each division carries a $5,000 purse for Maine eligibles. The overnight prep races are co-sponsored by the MHHA and Blue Seal Feeds.

In addition, in preparation for stakes season, Cumberland will offer starting car schooling on the first two Fridays in June (3 & 10), as well as non-wagering baby races on the following two Fridays (June 17 & 24), with opportunities for the youngsters to ‘learn and earn’ their way into the upcoming Maine Standardbred Breeders Stakes.