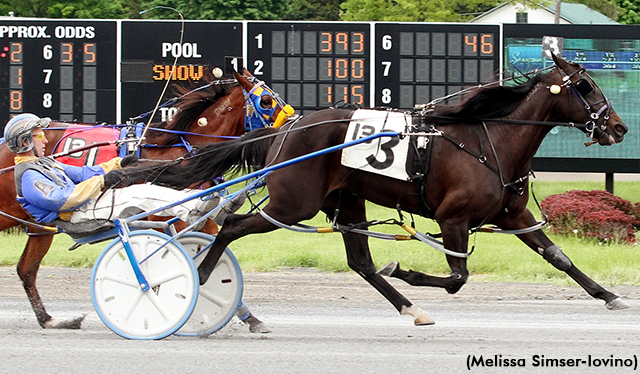 Last season's frosh-filly champ Youaremycandygirl made her sophomore debut in a $59,100 NYSS split, faltering from a fast pace and succumbing defeat to Wisdom Tree in 1:52.2. Youaremycandygirl blazed on the front as the 2-5 favourite, opening a 12-length lead by the half in :53.3 and paced to three quarters in 1:22.2 before being caught by the Ed Hart-trained longshot Wisdom Tree in the stretch. Alexis Faith, breaking at the start, recovered to finish second while Youaremycandygirl faded to last.

Ubettergo Go was an ultra-impressive winner on Sunday as Mark Macdonald piloted the Blake Macintosh trainee to a wire-to-wire score in a fast 1:52.3. Fellow Canadian-invader Pueblo Blue Chip scored in her $60,200 division on Sunday behind a front-running effort in 1:54.3 with Jim Morrill Jr. in the sulky.

Live racing continues on Monday, May 28 as a matinee card is scheduled for the Memorial Day holiday. First time is set for 12:15 p.m.