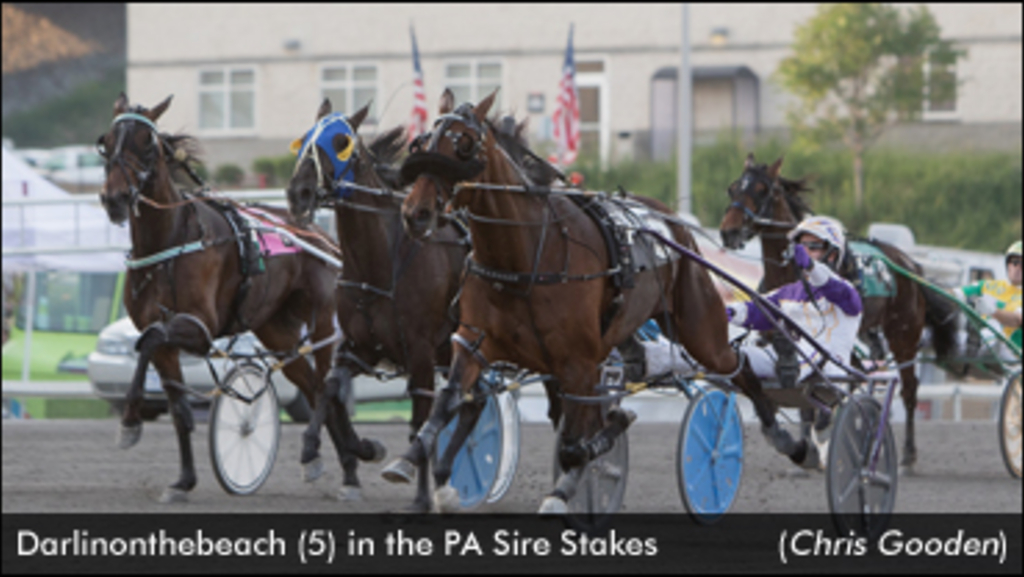 Darlinonthebeach survived a wicked :25.4 first quarter and rolled home for David Miller in a stakes record 1:49.4 in Friday’s Adios Betty, a $161,760 Pennsylvania Sire Stakes for three-year-old filly pacers at The Meadows. I Said Diamonds, who had lowered the stakes mark to 1:50 moments before Darlinonthebeach stepped on the track, captured the other division.

In the May 7 final of the Miss Pennsylvania, Darlinonthebeach was parked out in :25.2 and was out of gas late, finishing seventh. When she witnessed the brutal opening panel in the Adios Betty, trainer Nancy Johansson had the sinking feeling that history was repeating itself.

“When I saw the first quarter in :25.4, I said to the girl who takes care of her, ‘Oh no, not again,’” she said. “The difference today was that David was able to back her off the second quarter, so she had a little bit left in the tank when they came at her. She raced super.”

White Birch Farm’s homebred daughter of Somebeachsomewhere-Darlins Delight easily thwarted the first-over challenge of Shesasmokinlady and defeated the pocket-sitting Lispatty, an 86-1 longshot, by three-quarters of a length. Pure Country, the 1-2 favourite, rallied but could manage only show.

Johansson said Darlinonthebeach, who now boasts over $320,000 in career earnings, would be pointed to the Fan Hanover.

I Said Diamonds also endured a rough start when, as the 1-5 favourite, she was looped while on the outside and finally made the point in :26.1

“I was just waiting for the dust to settle,” said winning driver Jim Pantaleano. “I saw the outside horses leaving really hard, and I did not want to get into a speed duel. She was really relaxed on the lead, which obviously is a good attribute in a racehorse.”

I Said Diamonds defeated Call Me Queen Be by one and a quarter lengths, with Newborn Sassy third. Matias Ruiz conditions the daughter of Well Said-Silksndiamonds, who extended her lifetime bankroll over $285,000, for Little Bapa LLC.

“Last week, she got loose late, and she was coming really hard on the end of it,” said David Miller of the daughter of Somebeachsomewhere-Keystone Rebecca. “I thought tonight would be a good time to put her back on the lead. She’s a nice filly, a borderline sires stakes type.”

Terror At Night brushed to the front before the quarter and widened her lead from there, scoring her first stakes win of the season in a career-fastest 1:52.2. Drag N Sand was second, six and three-quarter lengths in arrears, while Triple Charm completed the ticket.

“I didn’t think she was up to stakes company until now,” said Les Givens, who conditions the daughter of Western Terror-Enhance The Night — a $20,000 yearling acquisition — for Nanticoke Racing, Edward Maas III and Arlene Paisley. “Down the road, who knows? I want to keep her happy.”

“She’s a great big, growthy filly,” Tetrick said. “She has a lot to learn yet. She’s still like a little kid out there — looks at everything, tries to jump shadows. She has a lot of talent, but she has to get her mind on right.”

Live racing at The Meadows resumes Monday with a special Memorial Day card beginning at 5 p.m.