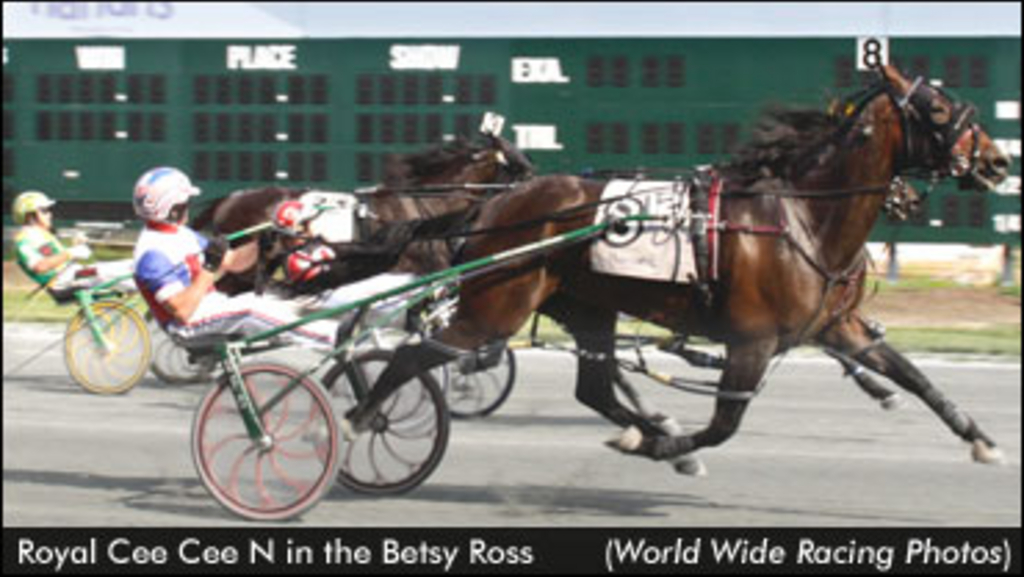 Royal Cee Cee N rallied home late to nail the pacesetting Put On A Show at the wire in the fifth edition of the $100,000 Betsy Ross Memorial Invitational Pace for older mares on Sunday afternoon at Harrah's Philadelphia

The six-year-old Christian Cullen mare trailed the field of seven after leaving from the outside post position before charging wide around the final turn and storming home to match her lifetime mark of 1:49.3 with Ron Pierce in the bike for trainer-owner Mark Harder. She paid $19.80 to win for the 8-1 upset. Favourite Put On A Show (George Brennan) finished second and defending champion Anndrovette (Tim Tetrick) was third.

Anndrovette and Higher And Higher (Daryl Bier) left the gate together and battled for the leading role during a :26.1 opening quarter with Put On A Show right on their heels parked out in the second over spot. Higher And Higher cleared to command at the quarter, but Put On A Show took over in front of the grandstand. Put On A Show led the way to the half in :53.1 and opened up three lengths on her foes by the 1:20 three-quarters mark while Anndrovette advanced first up and ducked into the gaping two-hole. Put On A Show maintained her leading margin into the stretch with Anndrovette following, but Royal Cee Cee N circled the field to get up in time for the half-length score.

“It was a very, very exciting race to watch,” Harder told Harness Racing Communications after the win. “That’s as excited as I’ve been watching a race in a long time. I know they were going big fractions and they’re going to come back to you, but Put On A Show was a long way in front of us at the three-quarter pole and we were three-wide.

“It’s a lot to ask to be going that speed and be three-wide all the way around that turn. I know they were going fast fractions and it was hard on the front-runners, but that’s still a big performance to give you. The fractions helped her, but she did it on heart too.”

Royal Cee Cee N, who entered the race off two consecutive wins in Philly's Mares Open, has won five times in 12 starts this year while banking $142,600. Lifetime, she boasts 20 wins from 43 starts and a bankroll totalling $492,412.

Tetrick won six of Sunday's 14 races, including a conditioned event in which the Pj Fraley-trained Rockem recorded a 1:48.2 world record mile for four-year-old geldings on a five-eighths mile track.