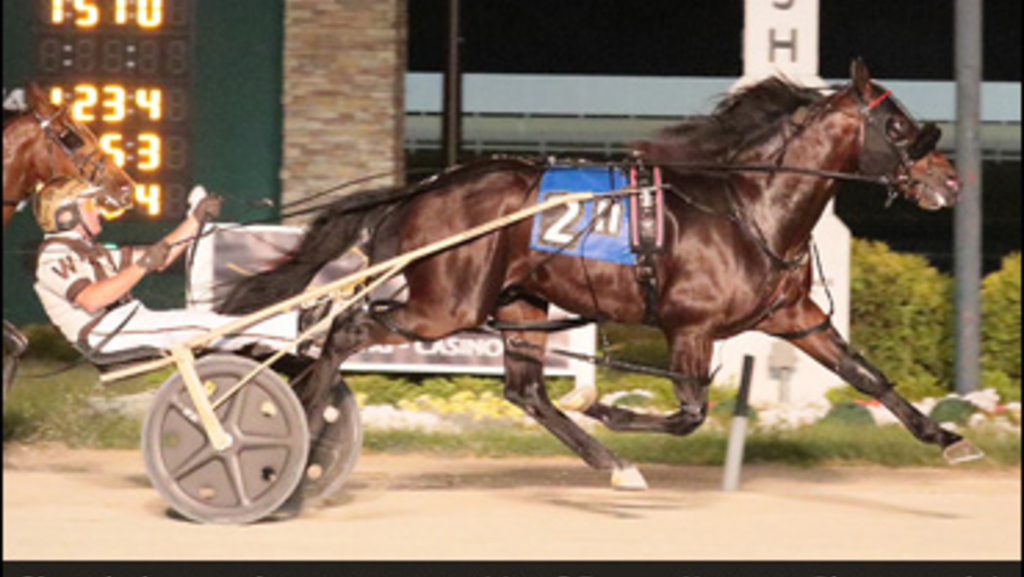 The Hoosier state’s three-year-old pacing colts were in the spotlight at Hoosier Park Racing & Casino on Friday, May 25 to square off in the opening round of Indiana Sires Stakes action and as predicted, the sophomore colts opened their series in impressive fashion.

Each colt was aiming to earn a spot in the first of five $75,000 Indiana Sires Stakes final slated for June 1 at Hoosier Park.

In the opening division, Rockinbeach utilized a ground-saving trip to hand Always A Prince his first loss of the season. With Ricky Macomber Jr. in the bike, Rockinbeach used a :26.1 final quarter and the inside passing lane to track down the pacesetting Always A Prince and Trace Tetrick late in the lane to score in 1:50.2. The Jamie Macomber trainee recorded his second win of the season and established a new lifetime best in the process.

The biggest upset of the night came in the very next division when Real Peace and Mike Oosting staged a big rally late in the lane to score in 1:53.2. Around The Horn LD and Trace Tetrick did much of the heavy lifting on the front and as the field turned for home, Real Peace found another gear and kicked home in :27.1 to get the win. Trained by Mike Brink, the three-year-old gelded son of Real Desire-Peace notched his first win of the season from three starts and sixth lifetime victory from 15 outings.

North America Cup eligible Shnitzledosomethin looked every the bit the part of a 3-5 favourite as he used a gate-to-wire effort to score his first victory of the season, in his first outing, in 1:51.1. Driven by regular pilot Peter Wrenn, Shnitzledosomethin left aggressively from post two to dictate fractions of :28.4, :56.3, and 1:23.4 before cruising home to a two-length victory. Trained by Dylan Davis, the son of Fred And Ginger-Summer N Sand bankrolled $355,337 throughout his two-year-old campaign, including a second-place finish in the $600,000 Breeders Crown final for two-year-old pacing colts.

In the final division of the night, Jeopardy and John DeLong turned a pocket trip into a 1:51.2 score. Romantic Interest and Trace Tetrick set splits of :26.1, :54.4 and 1:23.4 before feeling pressure from the rest of the field. Jeopardy found a :27.1 final quarter to surge past his rivals by nearly two lengths. Trained by Erv Miller, the gelded son of Rockin Image-Gottagetoutmore recorded his first win of the season and also established a new lifetime mark with the victory. It was also one of four wins on the evening’s 13-race card for driver John DeLong.

Indiana Sires Stakes action continues at Hoosier Park Racing & Casino on Saturday, May 26 with three divisions of $20,000 Indiana Sires Stakes eliminations for three-year-old pacing fillies. Saturday’s 11-race card will also feature a $15,000 guaranteed Hoosier High-5 pool with $5,338.30 in carryover money. The Hoosier High-5, also known as the pentafecta, is featured in the last race of every program at Hoosier Park and features a reduced takeout of 12 per cent.