Trotters were in the spotlight on the Sunday (May 23) program at Running Aces, with two Open events going postward on the eight-race program.

The $11,000 Open Handicap went to favourite Mandeville, who made it two in a row in the top trot in dominating fashion.

Nick Roland piloted the nine-year-old Majestic Son gelding right to the front from the outside post in the six-horse affair, making an easy lead and posting early fractions of :28.4 and :58.1 with Pridecrest riding along in the pocket. All American N was first to leave the pylons and applied pressure to the pacesetter during the middle stages of the race, before dropping into the pocket near three-quarters in 1:28. Turning for home, Mandeville had plenty of trot in reserve and was never in doubt through the lane, closing the mile with a :27.4 final quarter and checking in two lengths ahead of Pridecrest, who rallied past All American N in the stretch. 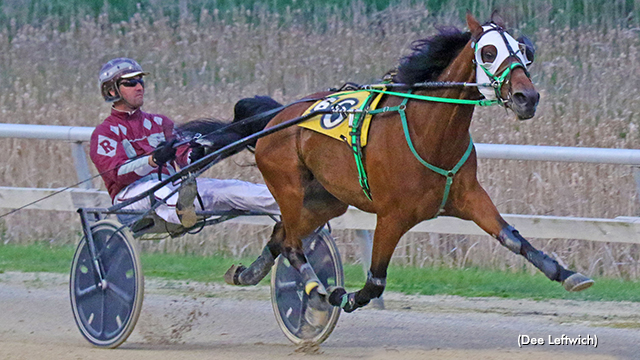 The 1:55.4 victory was the sixth tally of the season in 10 starts and the 36th win overall for Mandeville, who is owned and trained by Gerald Longo. He paid $5.00 to win.

Roland also captured the Three-Year-Old Open with last year’s freshman state champion Rush To The Bank, who was making his season’s debut in the $6,500 event, which drew a bulky field of 10 starters. Rush To The Bank was favoured from post 8, and had no trouble finding the lead. The impressive son of Banker Volo was on top from the word “go” and was never in doubt throughout the mile, stopping the timer in 2:00.1 for a career mark. Stablemate Its So Fluffy was a solid second throughout, and Coatofmanycolors was home in third. 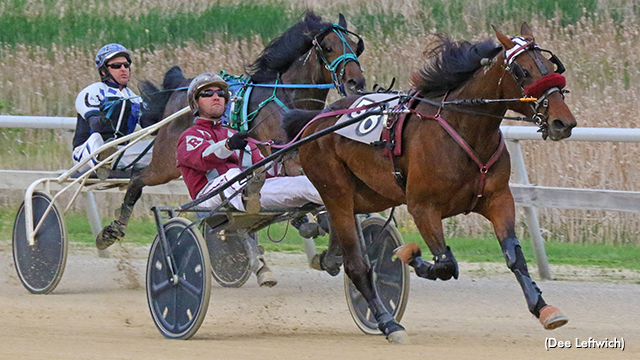 Rush To The Bank has now won 11 of 16 starts for owners Jeralene Roland and Vickie Rush. Trainer Dan Roland sent out the top-two finishers in the event, both of them sired by Banker Volo. He paid $4.60 to win.

Roland was the leader on the program, scoring a driving hat trick, while Luke Plano picked up a double.

Live racing at Running Aces is offered every Tuesday, Thursday and Sunday with first post at 6:05 p.m. (CDT).